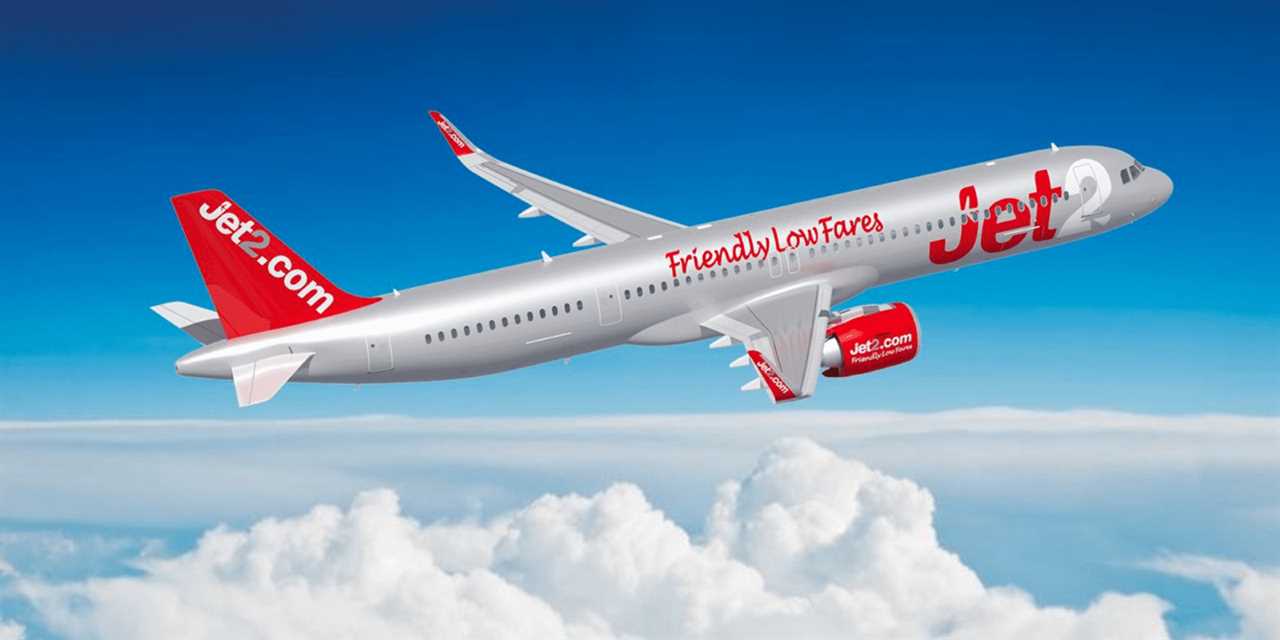 Following a more-than-challenging 2020 due to the COVID-19 pandemic, 2021 is on track to be a year of recovery for the two largest commercial plane makers. The past two years have particularly been challenging for Boeing, but things are now looking brighter. Orders and deliveries are on the rise, and the 737 MAX has been cleared to return to the skies in much of the world. However, China, the world’s second-largest market for commercial air traffic, is still prohibiting the plane from flying. In August, Boeing conducted a successful 737 MAX test flight for the Civil Aviation Administration of China (CAAC), and it is expected that the jet will be able to resume commercial service before the end of the year.

In Q3 2021, Boeing delivered 85 jets – up from 79 in Q2 – including 66 737s (62 MAX / 4 NG), two 747-8s, 11 767s, and six 777s. Production of the 737 MAX was suspended from January 2020 until the end of May of that year, when Boeing announced it had commenced low-rate production of the aircraft. Boeing currently produces the 737 MAX at a monthly rate of 16 and continues to expect to gradually increase the rate to 31 per month by early 2022, with further increases as market demand allows. Meanwhile, Boeing has moved all 787 final assembly to its facilities in Charleston, South Carolina. No 787s were delivered in the third quarter after Boeing halted deliveries in May – for the second time in less than a year. The Federal Aviation Administration (FAA) is reviewing Boeing’s method for inspecting and evaluating the aircraft to ensure it meets federal safety regulations. The FAA is also looking into whether modifications are needed on in-service 787s; however, the regulator has also made it clear that the issue poses no immediate threat to flight safety. According to Boeing, the company is continuing to complete comprehensive inspections across the 787 production system and within the supply chain, while holding detailed, transparent discussions with the FAA, suppliers and our customers. With inspections and rework consuming significant production resources, the 787 production rate remains lower than the normal rate of five airplanes per month.

In Q3 2021, Airbus delivered 127 jets – down from 172 in Q2) – including 13 A220s, 104 A320s (100 NEO / 4 CEO), four A330s, and six A350s. Prior to the pandemic, Airbus was targeting a 5 percent A320 rate increase to 63 jets per month from 2021, and was also discussing a further ramp-up with its supply chain that could have brought the production rate up to as high as 67 aircraft per month, or 804 per year, by 2023. This would have put the company within reach of a total of 1,000 jet deliveries per year. These plans have now been shelved. In January 2021, Airbus released an updated production rate plan and has since increased A320 production from a rate of 40 per month to 43 in Q3 2021 and expects to reach 45 in Q4. Airbus recently called on suppliers and asked them to prepare for a rate of 64 by Q2 2023. Airbus also mentioned a scenario with a rate of 70 by Q1 2024 and, longer term, the company is investigating opportunities for rates as high as 75 by 2025. The A220 is being produced at a rate of five aircraft per month, which will be increased to six in early 2022. The A350 production rate currently averages five per month and will be increased to six by autumn 2022. A330 production remains at an average monthly production rate of two per month with no plans to raise it for the foreseeable future. With only three A380s in backlog as of September 30, 2021, the end of the A380 program draws near. The last aircraft is expected to be delivered to Emirates in May 2022.

In Q3 2021, Airbus had a good quarter and booked seven new orders for a total of 105 jets and reported 10 cancellations. Orders included 98 A320s (all NEO) and seven A330s. The largest order was placed by Jet2, a British low-cost leisure airline, which purchased 36 A321neos. Also in Q3, Delta Air Lines booked 30 A321neos while LATAM, the largest air carrier in Latin America, ordered 21 A321neos and 7 A320neos. Another significant booking was Condor Flugdienst’s order for a total of seven A330-900s. The German charter airline selected the A330-900 to renew its long-haul fleet and will operate the aircraft on its international long-haul network to the Americas, Africa, the Caribbean and Asia. In 2020, Airbus accumulated 383 gross orders and received 115 cancellations, for a total of 268 net new orders – enough to win the orders crown for the second year in a row. 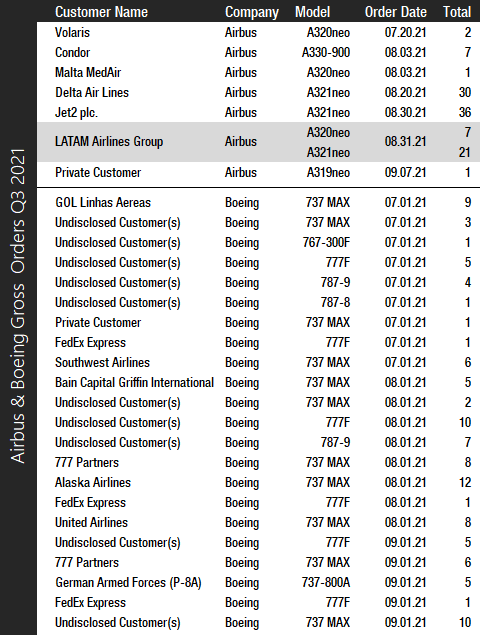 Forecast International’s Platinum Forecast System is a breakthrough in forecasting technology that provides 15-year production forecasts. The author has used the Platinum Forecast System to retrieve the latest delivery forecasts and, for 2021, Forecast International’s analysts currently expect Boeing and Airbus to deliver 304 and 586 commercial jets, respectively.

On October 27, Boeing will report Q3 2021 earnings and operating results, to be followed by Airbus’ report the day after. 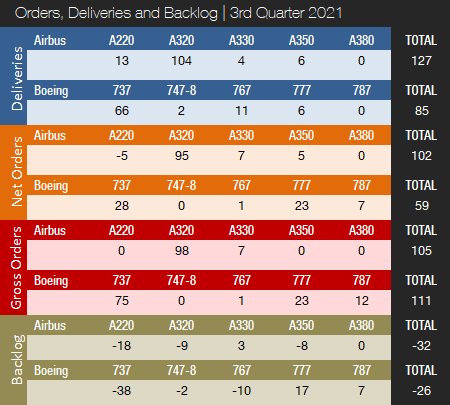 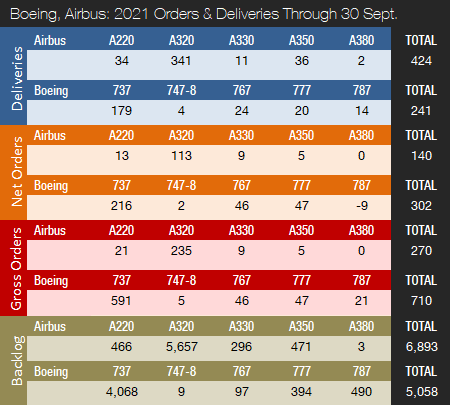 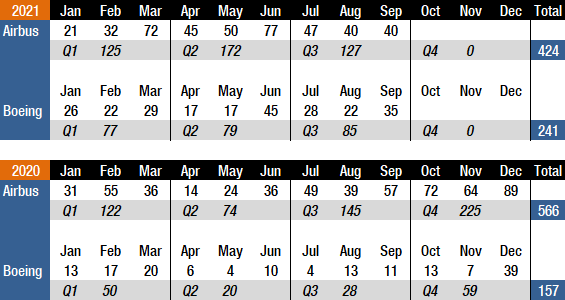 Forecast International’s Civil Aircraft Forecast covers the rivalry between Airbus and Boeing in the large airliner sector; the emergence of new players in the regional aircraft segment looking to compete with Bombardier, Embraer, and ATR; and the shifting dynamics within the business jet market as aircraft such as the Bombardier Global 7000, Cessna Hemisphere, and Gulfstream G600 enter service. Also detailed in this service are the various market factors propelling the general aviation/utility segment as Textron Aviation, Cirrus, Diamond, Piper, and a host of others battle for sales and market share.  An annual subscription includes 75 individual reports, most with a 10-year unit production forecast. Pricing begins at $2,295, with discounted full-library subscriptions available.  Click here to learn more.

Based in Denmark, Joakim Kasper Oestergaard is Forecast International’s AeroWeb Webmaster and European Editor.  In 2008, he came up with the idea for what would eventually evolve into AeroWeb.  Mr. Oestergaard is an expert in aerospace & defense market intelligence, fuel efficiency in civil aviation, defense spending and defense programs.  He has an affiliation with Terma Aerostructures A/S in Denmark – a leading manufacturer of composite and metal aerostructures for the F-35 Lightning II.  Mr. Oestergaard has a Master’s Degree in Finance and International Business from the Aarhus School of Business – Aarhus University in Denmark.