BAE Systems publishes the report "Contribution to the UK Economy"

BAE contracted the research firm Oxford Economics to “produce an independent analysis of our contribution to the UK’s economy in 2020”.The full..

BAE contracted the research firm Oxford Economics to “produce an independent analysis of our contribution to the UK’s economy in 2020”.

The full report ‘The Contribution of BAE Systems to the UK Economy 2022’ was just released and provides some insight into both BAE and the wider UK defence industry in 2020.

This article was submitted by John. John is a student at the University of South Carolina studying political science. He has also studied the Arab-Israeli conflict at the Hebrew University of Jerusalem.

John currently hosts ‘The Osint Bunker‘ podcast, a popular  production focusing on global events, you can read more about the podcast on our dedicated page here.

Additionally, BAE spent £3.8 billion with 5,000 UK suppliers and reports £1.1 billion spent on R&D this year, with £100 million funded directly from the company. BAE was the ninth-largest patent applicant in the UK in 2020 under the Patent Cooperation Treaty, with 70 applications. 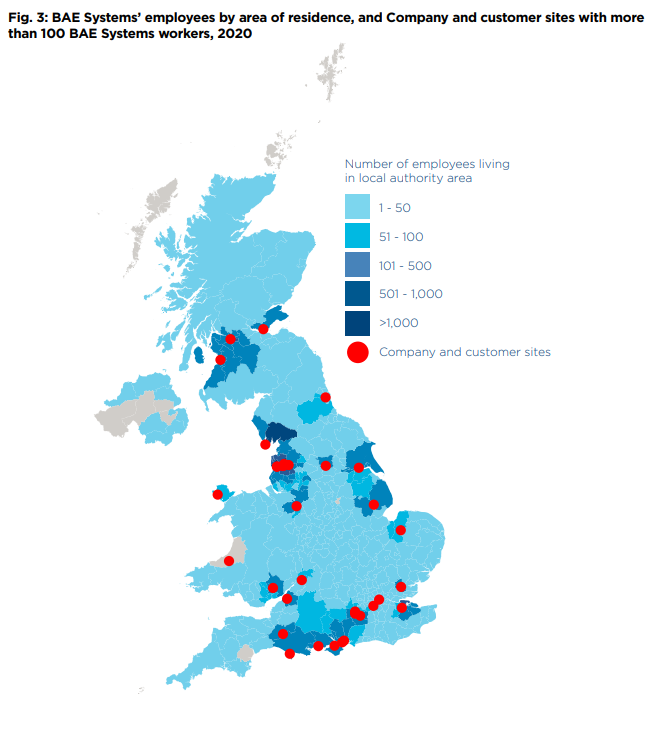 The report includes a focus on current BAE space missions, including the acquisition of the firm ‘In-Space Missions’ a UK company that designs, builds, and operates satellites and satellite systems. BAE specifically targeted the fact that it allows the company “to create a sovereign UK space offer”, in line with the request included in the UK Government’s 2021 integrated defence review.

BAEs undersea warfare program also gets nod, as BAE reports “Nearly 8,500 employees work in the Barrow Shipyard on the Dreadnought and Astute submarine programmes”. Oxford Economics predicts the Dreadnought programme will support almost 30,000 jobs around the UK, including through supply chain and worker spending multiplier effects.

BAE released some interesting figures on the Tempest program, as it moves through early R&D stages. The program is currently working on more than 60 demonstration projects across the breadth of combat air, and specifically mentions the electrical starter-generator developed by Rolls-Royce. BAE also claims to be engaging with more than 600 suppliers.

Under the environmental sustainability umbrella, BAE set a target of achieving net zero greenhouse gas emissions across all its operations by 2030. BAE also mentions the fact that climate targets for the UK are not helped by the fact that “the UK does not use nuclear-powered surface warships”. BAE also touts its simulators, claiming that “simulators require no jet fuel, saving 9.6 tonnes of CO2 per flight”.

BAE is also pursuing alternative fuels, as “electrification is not currently possible for all vehicle types” current alternate fuels are “not currently produced in sufficient quantities to be feasible for the defence sector, and are currently much more expensive than fossil fuels.”

The T-650 will have a top speed of 140 kilometres per hour and the ability to carry a 300-kilogram payload with a range of 30 kilometres.

In Scotland, BAE supports 6,420 employees across various projects. The shipyards at Govan and Scotstoun employed 2,700 workers in 2020. Sir Roger Carr, Chairman of BAE described the Type 26 frigate as “A tribute to British skills and engineering” The Type 26 programme has more than 100 suppliers globally, and more than £1 billion has been invested across the programme’s supply chain. Construction of the Canadian Navy’s Type 26s will begin in “the mid-2020s”. Between the UK, Canada, and Australia 32 ships of the Type 26 design will be operated. 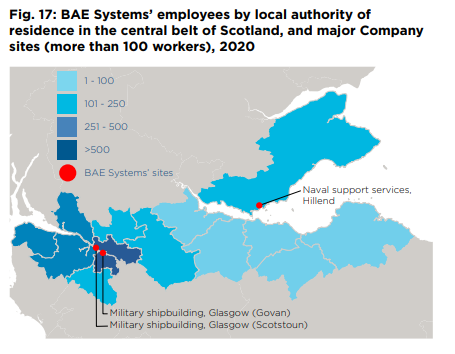 In Cumbria, 8,460 workers are employed at BAEs submarine building facility at Barrow-in Furness in 2020. These employees support the manufacture of the Astute-class attack submarines and Dreadnought-class ballistic missile submarine. 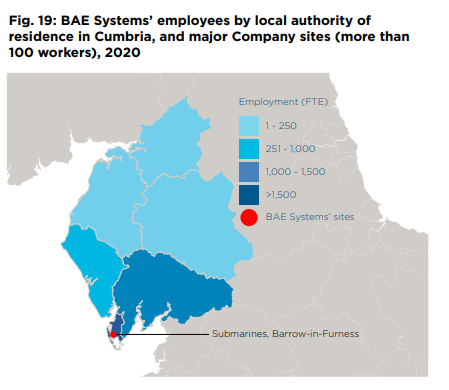 In Lancashire, BAE operates the military aircraft facilities at Samlesbury and at Warton, each employing almost 5,000 workers. The sites most recently secured a contract to supply 38 Typhoons for the German Air Force (https://ukdefencejournal.org.uk/german-typhoon-order-boosts-uk-economy-say-bae/). Additionally, Samlesbury handles the construction of aft-fuselage and the horizontal and vertical tailplanes for every F-35 military aircraft. 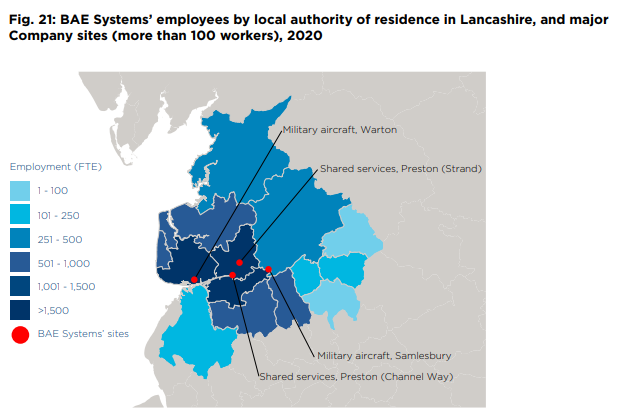 BAE operates 13 sites in the south of England, the largest being Portsmouth Naval Base, which BAE manages on behalf of the Royal Navy, employing 2,400 workers. 70% of Royal Navy surface ships are based there, including both Queen Elizabeth-class aircraft carriers. BAE has other sites in the area, manufacturing small boats, naval electronics, and other equipment for aerospace and defence. 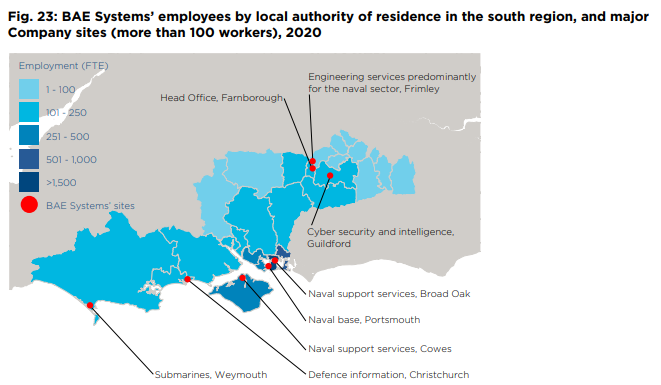