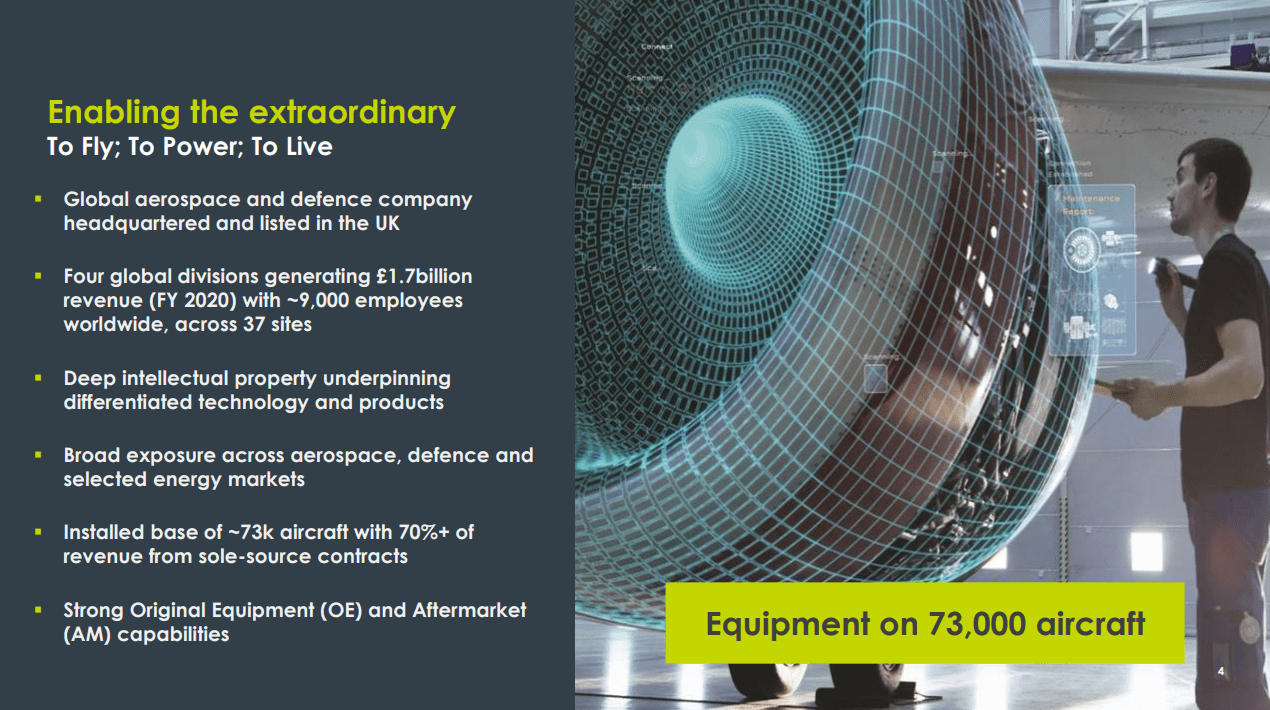 TransDigm Group has withdrawn its preliminary, non-binding offer to acquire UK-based Meggitt. Meggitt offers a broad product portfolio with as much as 70% of revenue coming from sole-source contracts, and the company has products installed on more than 70,000 aircraft. Photo Source: Meggitt plc.

Meggitt had given TransDigm until September 14 to make a firm offer. TransDigm Chairman W. Nicholas Howley stated, “We have long admired and studied the Meggitt business and believed that a combination between the two companies could provide value to investors of both companies. However, based on the quite limited due diligence information that was made available and the resulting uncertainties, TransDigm could not conclude that an offer of 900 pence per Meggitt share would meet our long-standing goals for value creation and investor returns. TransDigm and our advisers put substantial time, effort, resources and expense into evaluating a potential transaction”

Shares in Meggitt closed down 12% on September 7 to 738 pence and had dropped another 6 pence when markets closed on Friday, September 10. The current price is well below Parker Hannifin’s 800 pence-per-share bid. This indicates concern among shareholders that the deal will not close.

In response to TransDigm’s comments, Meggitt said that it gave both suitors “equivalent access to both confirmatory due diligence information and management”, and added that further information was provided to TransDigm and Parker Hannifin in response to a request from the former.

If the acquisition of Meggitt had materialized, it would have been TransDigm’s largest acquisition to date. TransDigm, which traces its history back to 1993, went public in 2006 and has since grown its annual sales by more than ten-fold to $5.1 billion in fiscal 2020. The growth has been fueled by a long line of acquisitions of mainly American aerospace & defense companies. At the start of the year, however, TransDigm completed a nearly $1 billion acquisition of the Aero Connectivity division of UK-based Cobham, the company which was controversially acquired by U.S. private equity business Advent two years ago. Despite generating strong profits and free cash flow of over $1.1 billion in fiscal 2020, TransDigm’s debt has surged to over $20 billion or more than 20-fold since going public, and the company currently has more debt than assets on its books. Shareholder’s equity stands at minus $3.1 billion as of July 2021. One might speculate that a TransDigm acquisition of Meggitt would have been biting off more than the company can reasonably chew at this time. At the same time, it could be argued that paying $9.7 billion for a company that earned less than $300 million per year prior to the COVID-19 pandemic is too expensive.

The British government is closely monitoring the situation and Parker Hannifin has already agreed to a number of time-limited and legally binding contractual commitments to alleviate UK industrial base and national security concerns. On September 21 date, Meggitt shareholders will vote on the Parker Hannifin deal.

If the deal is approved by shareholders and subsequently by the British government, Meggitt becomes part of Parker Hannifin’s Aerospace Systems division, which will in turn more than double in size. Meggitt would add a broad range of products to Parker Hannifin’s portfolio and as much as 70% of Meggitt’s sales are from sole-source contracts.

Forecast International’s Defense & Aerospace Companies, Volume II – International service includes coverage of over 90 top companies and subsidiaries outside North America, with a focus on key players in Europe and Asia. Each of the volume’s 50+ reports contains data on recent programs, mergers, and joint ventures. Among the notable corporations covered are OEMs such as Airbus, Aviation Industry Corporation of China (AVIC), BAE Systems, UAC, and Embraer. Also featured are Tier I and Tier II contractors such as Rolls-Royce, Hanwha, Rafael, RUAG, and IHI Corporation. Pricing begins at $2,295, with discounted full-library subscriptions available.  Click here to learn more.

Based in Denmark, Joakim Kasper Oestergaard is Forecast International’s AeroWeb Webmaster and European Editor.  In 2008, he came up with the idea for what would eventually evolve into AeroWeb.  Mr. Oestergaard is an expert in aerospace & defense market intelligence, fuel efficiency in civil aviation, defense spending and defense programs.  He has an affiliation with Terma Aerostructures A/S in Denmark – a leading manufacturer of composite and metal aerostructures for the F-35 Lightning II.  Mr. Oestergaard has a Master’s Degree in Finance and International Business from the Aarhus School of Business – Aarhus University in Denmark.