Drones could allow Britain to create a second carrier-air wing

Drones could “allow the opportunity” for Britain to put an air wing on both HMS Queen Elizabeth and HMS Prince of Wales at the same time.The current..

Drones could “allow the opportunity” for Britain to put an air wing on both HMS Queen Elizabeth and HMS Prince of Wales at the same time.

The current plan is for two aircraft carriers and one air wing that would sail on whichever aircraft carrier is being held at “very high-readiness”. It was however suggested at a Defence Select Committee evidence session that drones might allow for a second carrier  air wing. The transcript is below.

“Are we matching what the Department has always said, which is that the carrier full operating capability matures at the end of 2024 and needs to be able to deploy 24 jets on an aircraft carrier? We are absolutely on track to be able to do that, and I think that has always been a very clear aspiration and it has been laid out.

Within the Navy—so not yet a departmental plan—how might we be able to look to provide a second carrier air wing? In the modern world, does that mean purely more jets, or is it what I think most of us would see as being a hybrid force of both jets and drones?”

“No, drones from the aircraft carrier. If you look at what is going on with the Air Force and their Mosquito and LANCA programme, and if you saw what happened in September with HMS Prince of Wales flying the first jet drone, that is the area that we want to pursue. Then we can start to give Ministers choices around whether or not it might be feasible, but not at the expense of buying lots of expensive aircraft even more quickly. Are there opportunities with the cost of drones? Does it become a better offensive capability to blend drones with crewed jets? And does that then start to allow you the opportunity for two carrier air wings to marry up with both carriers?”

Drones on the carriers?

Carrier based ‘Vixen’ drones are being considered for a range of missions including combat, aerial refuelling and airborne early warning but what could they look like?

According to an official Royal Navy publication, titled Future Maritime Aviation Force, which was originally published in December 2020, the Royal Navy aims to replace its helicopter-based airborne early warning (AEW) platform, the Merlin HM2 Crowsnest, with a fixed-wing UAV, currently known as Vixen, by 2030.

The Royal Navy also expects to utilise Vixen in surveillance, air-to-air refueling, electronic warfare and strike roles. A slide from the publication shows that Vixen could be used for airborne early warning, strike, aerial refuelling and more. 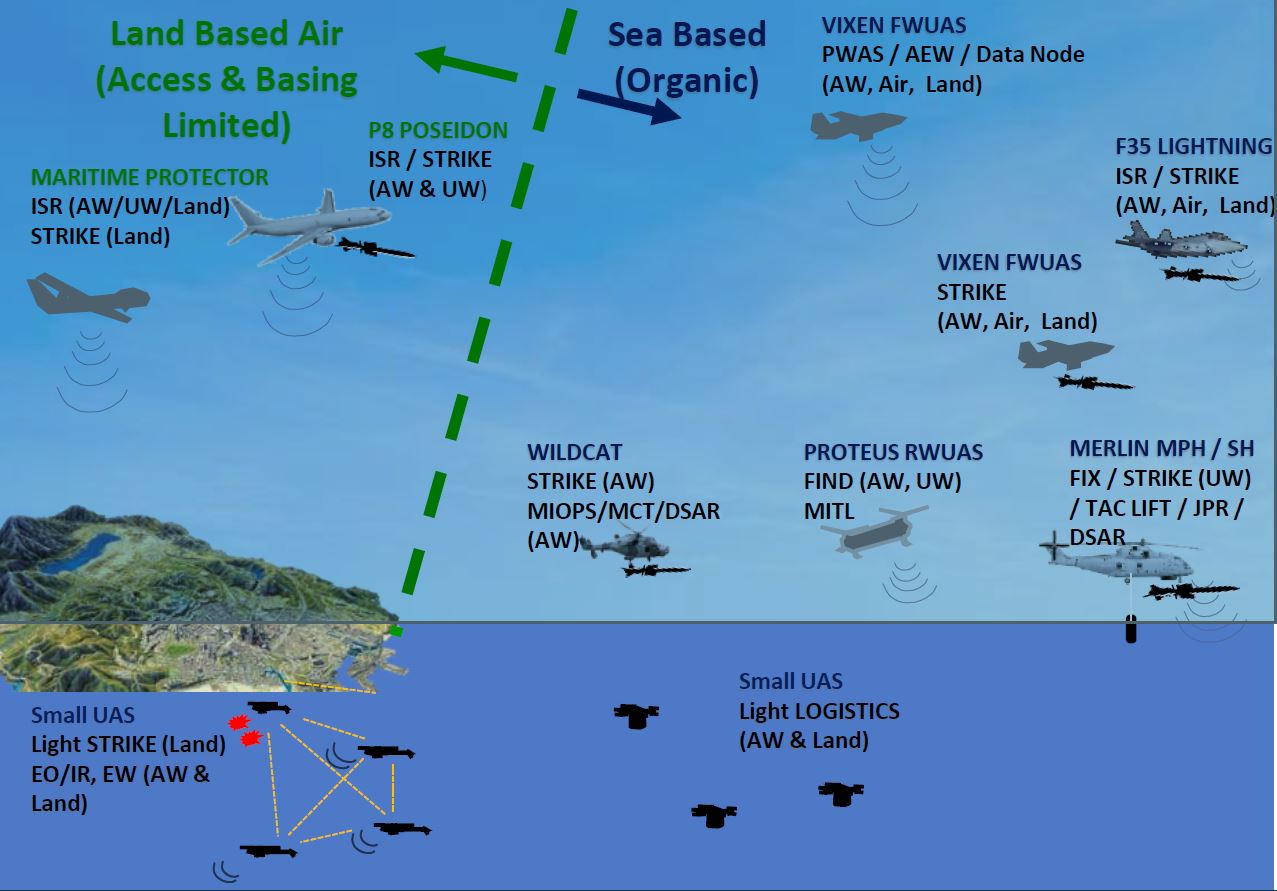 What will the Royal Navy’s new Vixen jets look like?

Naval Technology reported here that the Royal Navy and RAF are working together to study potential platforms for Mosquito and Vixen, suggesting that a common drone could be fielded fby both services.

We reported recently that the uncrewed fighter aircraft demonstrator for LANCA, known as Mosquito, will begin a flight-test programme in 2023.

“Our £30m contract to design and manufacture the prototype for an uncrewed fighter aircraft, known as Mosquito, is supporting more than 100 jobs in Belfast. In 2023 we will be looking to conduct a flight-test programme for the demonstrator.”

Known as a ‘loyal wingman’, these aircraft will be the first uncrewed platforms able to target and shoot down enemy aircraft and intercept surface to air missiles.

“The uncrewed combat aircraft will be designed to fly at high-speed alongside fighter jets, armed with missiles, surveillance and electronic warfare technology to provide a battle-winning advantage over hostile forces. Known as a ‘loyal wingman’, these aircraft will be the UK’s first uncrewed platforms able to target and shoot down enemy aircraft and survive against surface to air missiles.” CGI of Mosquito via Spirit AeroSystems.

Team MOSQUITO, which also includes Northrop Grumman UK, will mature the designs and manufacture a technology demonstrator to generate evidence for the LANCA programme.

If successful, Project Mosquito’s findings could lead to this revolutionary capability being deployed alongside the Typhoon and F-35 Lightning jets by the end of the decade.

“The Project will deliver a demonstration of a capability that the RAF may wish to develop further in the future,” a spokesperson from the RAF said.

“It is not intended to output an operational capability at this stage, but it will inform future decisions for the future UK combat air capability.  We are exploring the optimum way in which such capabilities could complement platforms such as Typhoon, F-35, and Tempest.”

Most commentators believe that Vixen and Mosquito are likely to share a common platform.

How will the drones be launched?

Earlier, we reported that the Ministry of Defence is currently seeking information on the potential for industry provide assisted launch and arrested recover systems for a range of air vehicles, which would be suitable to fit to a vessel within 3 – 5 years.

The Ministry of Defence say that this request for information is to support the development of the Royal Navy’s Future Maritime Aviation Force (a presentation on which is where the slide above came from) with potential for use with both crewed and un-crewed air vehicles.

The Ministry of Defence add that it is looking to assess the availability of electromagnetic catapult, and arrestor wire systems for the launch and recovery of air vehicles.

While the Request for Information looks to assess the “availability of electromagnetic catapult and arrestor wire systems to launch aircraft” from a ship, words associated with the previous effort to explore converting the vessels to ‘CATOBAR’ in order to launch carrier variant F-35Cs, it shouldn’t be taken as indication that the Royal Navy are abandoning the short take off and vertical landing F-35Bs and returning to catapult launched fighters. On the contrary, they’re looking to augment the F-35Bs.

In fact, the upper and lower weight limits of the catapult and recovery system outlined aren’t enough to launch or recover any variant of the F-35 in normal conditions.

The launch and recovery options mentioned would be utilised for larger uncrewed aircraft as the armed forces begin to rely on them more and more in place of crewed platforms.

Anyway, on to the Request for Information itself.

“Potential supplier and interested parties are invited to provide information in relation to potential solutions which are sufficiently technically mature to be fitted to a suitable ship from 2023.”

According to the Request for Information, the Ministry of Defence have set out the following requirements.

According to the Ministry of Defence, the intended outcomes of the Request for Information are as follows:

“a. Develop further MoD understanding of the different technologies and capabilities available in the market, both current and emerging.
b. Alignment of potential future MoD requirements with industry standards and processes for procurement of maritime un-crewed and autonomous capabilities; and,
c. Enable the Authority to develop a procurement strategy that will deliver best value for money for Defence.”

The Royal Navy is driving hard to introduce a range of un-crewed air vehicles and to “give wider options for the use of different air vehicles types within the Fleet”.