HMS Queen Elizabeth’s Carrier Strike Group exercised with ships and aircraft from the U.S. Navy, the Royal Australian Navy and the Japanese Maritime..

The exercise is the ‘Maritime Partnership Exercise’ and it is a multilateral maritime exercise between the Royal Australian Navy, Japan Maritime Self-Defense Force, Royal Navy, and U.S. maritime forces, focused on naval cooperation, interoperability and regional security and stability in the Indo-Pacific and “is an example of the enduring partnership between Australian, Japanese, U.K. and U.S. maritime forces, who routinely operate together in the Indo-Pacific, fostering a cooperative approach toward regional security and stability”, say the U.S. Navy.

The group recently visited Singapore. Singapore is one of over 40 countries which the Carrier Strike Group will visit or exercise with during its global deployment.

“The Carrier Strike Group’s deployment has been designed to recognise the importance of the region globally. The Group’s presence also demonstrates our support for the freedom of navigation passage through vital trading routes and our commitment to an international system of norms that benefits all countries.

So thank you Singapore for your support to the Carrier Strike Group’s deployment, for contributing to air exercises alongside our jets and supporting HMS Queen Elizabeth’s pit stop at Changi. We are proud to play our part in continuing to grow and deepen the Singapore-UK relationship.”

As part of its maiden operational deployment, the Carrier Strike Group will sail over 26,000 nautical miles, engaging with 40 countries from the Mediterranean to the Indo-Pacific and back again.

The Carrier Strike Group includes ships from the United States Navy, the Dutch Navy, and Marines from the US Marine Corps as well as air assets from 617 Sqn, 820 NAS, 815 NAS and 845 NAS. 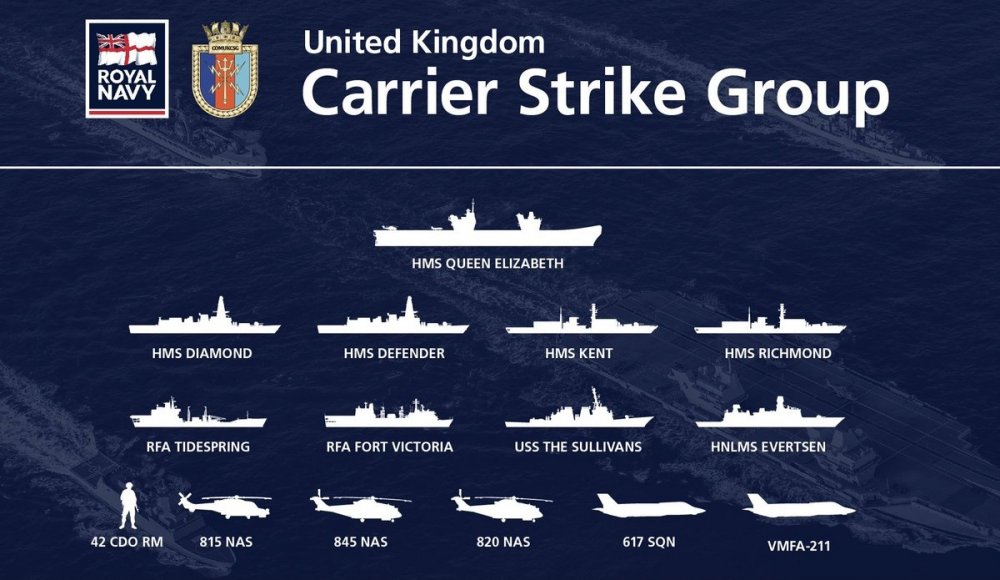 Not pictured above is an Astute class submarine that is with the group.