Fragmentation effects from artillery HE fires

.Artillery high explosive fires are a complicated technical and tactical topic. Even the working of the shell itself is complicated. The radius at..

Artillery high explosive fires are a complicated technical and tactical topic. Even the working of the shell itself is complicated.

The radius at which the blast of the explosives kills is rather small and incendiary effects are usually unexpected and unintended side effects. Most of the HE effect stems from fragmentation.

Fragmentation of a simple steel shell is quite unpredictable, but there are some relationships known. Such shells burst into many tiny fragments and very few large fragments, some some fragments of intermediate size.

Higher quality explosives can in theory be used to increase the effect. Pure TNT and the cheaper mix Amatol are classics obsolete by now. There's little reason to expect anything more powerful than RDX or a RDX/TNT mix in unguided HE shells. RDX is about 60% more powerful than TNT. RDX is ancient technology by now, so we can assume that the explosives of HE shells world-wide are of about equal quality within their shelf life.

A controlled fragmentation is possible by using a serrated the shell body, and the best way to do it is to serrate on the inside (which is trickier for production, and old hand grenades often used external serration). Serration on the outside raises the question of air friction and is less effective, but easier to apply. Serration on both sides calls into question the mechanical strength of the shell body (huge forces apply during acceleration and imparting spin in the barrel) and more than combines the required production effort (the serration patterns should match).

Another option to improve fragmentation is to have the fragments first (steel or tungsten balls) and then embed them into a matrix that allows the fragments to fly as intended upon burst. Another option is to use coils instead of balls, but I've never seen that option with artillery or mortar HE ammunitions.

So this is the state of art; steel or even tungsten balls embedded into a matrix. You can choose the material, explosive charge and ball size to tailor the shell for a certain penetration ability at a certain distance (ingoing shell velocity for a while). There are for example a couple hand grenades with such very small preformed fragments that they're for purposes of war harmless to personnel (except unprotected eyes) at twice their lethal radius already.

Small HE munitions are more efficient at fragmentation than bigger ones ceteris paribus. This is so because of the slowing air drag to the fragments. This was the driving force behind bomblet (submunitions, many small explosive grenades inside a shell, dispersed before impact) cargo munitions (ICM / DPICM), which are now banned by the cluster munitions ban in most countries.

This was about the burst.

Next, keep in mind an artillery shell needs to be fused.

The typical fuses are delay fuses, time fuses, point detonation (PD) / point detonation super quick (PDSQ) and proximity (PROX, for artillery purposes always a radio frequency fuse triggered by its echo, with some counter-jamming precautions). Most fuses know two modes, to be selected by a tool; delay and PD is a common combination.

The point of having different fuses is to choose different locations of burst. Delay bursts inside the soil (for cratering) or buildings, PD/PDSQ is a cheap way of achieving some above-ground fragmentation effect (much better if it hits a tree), but many fragments go into the ground or up into the air when you fuse upon contact with the soil. Proximity fuses are meant to fuse the shell several metres above ground, so its fragments cover a large area and also hit troops who are flat on the ground. Time fusing is too tricky to use for this in indirect fires, and more relevant to illumination and smoke munitions.

This was about fusing.

Next, let's look at the effect of angles. The angle of descent at explosion matters greatly. A shot at a very shallow angle will fragment to the sides, but project very few fragments forward. This is only OK if you use a delay fuse on flat terrain for a bouncing shot that explodes in the air after bouncing off the ground. This technique was in much use during WW2, but nowadays you simply pick PROX fuses for even better effect.

A close to vertical angle is best for all-round fragmentation effect for a very slow ammunition (the picture depicts a shell moving more than twice as fast as a mortar bomb would) and greatly enlarges the lethal area compared to a 45° angle of impact. Fast-moving shells can have their optimum angle of descent well between 45° and 90°.

The angle of descent can be manipulated by howitzers (and to some degree also by most mortars) by choosing a different elevation angle and different propellant charge strength (more or less propellant modules). This also modifies the time of flight and a strong MRSI (multiple round simultaneous impact; how many shells arrive in first 10 seconds before troops in the target zone can react effectively) strike requires a mix of such combinations anyway to maximise the MRSI value.

Finally, let's keep in mind not all shells descend at the same velocity. Mortar munitions are often subsonic upon arrival, for example. This can also happen with howitzer shots. The motion of a fragment (ball) from the shell side wall is the sum of forward motion speed of the shell and sideward motion speed from the explosion. In the end, that fragment is moving diagonally forward to the side. The faster the shell at the time of explosion, the more pronounced this forward movement of the fragments. This matters much, for this forward movement means that the fragments are being driven into the ground. Fast shells need to be fused higher by the PROX fuse for optimum effect.

So now we have the criteria for a maximum deadly HE shell:

And this is it: 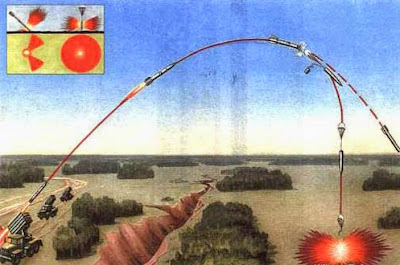 I seem to have underestimated the usefulness of the principle for spin-stabilised howitzer shells in 2015.

The ideal HE shell for suppressive fires (which have fallen a bit out of fashion as quantities of active duty artillery pieces have shrunk) and cratering is to have a cheap steel body and a PD/delay fuse. Cheap HE shells with delay fuse can also be used to intentionally create craters as obstacles especially on roads or as cover for friendly infantry. Not all firing missions have a use for high end maximum lethality ammunitions.

Today we're expecting the first howitzer shots to be on target and for effect (exploiting surprise), but we would still shoot old school if satellite navigation systems failed and maps were insufficient. W would first use a salvo to observe where it lands, correct until the salvo is straddling the target and then switch to quick fire for effect. These first ranging shots would best be done with cheap HE shells with delay fuses. The cheap shell requires less expenses beforehand and the cheap delay fuse makes the impact very visible (thrown up dirt) and it would be least dangerous to friendlies who are often close to the target.

This blog post summed up enough to give the reader the basics to judge the own countries' artillery munitions approach. The German approach so far is -save for a handful of gold plated special munitions - to use insensitive explosives 155 mm HE shells with decent fuses and preformed fragments embedded in the shell walls. That would be fine, but the quantity of HE shells in stocks is (albeit not known to the public) bound to be small and part of those stocks may be older type shells at or past shelf life. Russia is widely understood to have huge quantities of really old (70's, 80's if not worse) artillery munitions, but they kept DPICM in their inventory, which gives them an advantage.

I suppose the details given here have brought across the message that the quality of HE munitions can multiply artillery effectiveness.

Did you miss our previous article...
https://chiefmanagementofficer.blog/defense/crisis-in-west-africa-the-rise-of-coups