It is difficult to find numbers

Numbers are hard, and randomly very scary or not scary at all to many people. A long time ago I was paid to tutor a pupil who had difficulty with..

Numbers are hard, and randomly very scary or not scary at all to many people.

A long time ago I was paid to tutor a pupil who had difficulty with math. Those difficulties could be summarised as 'he stopped understanding math by grade 5 and doesn't take the concept of math seriously'. By bad luck one of the next chapters to tutor was set theory. Neither the boy nor his mother had any idea what set theory could possibly be good for -it's not even calculation- and he took it even less seriously. It was also nigh-impossible to justify some more hours to make him understand the chapter. Learning and understanding set theory is an almost indispensable step towards not boing a bullshit-blathering idiot as an adult.

Set theory teaches to sort thoughts and to keep apart what doesn't belong together.

Fast forward to our time, it has become painfully obvious that most humans simply cannot understand exponential functions, specifically exponential growth. Math at school didn't educate them. I looked at Covid figures in March 2020 and concluded it's going to be a huge thing while it was still tiny. I had no means of including the effects of countermeasures and whatever else leads to plague waveforms. I had the official daily case figures in a spreadsheet and told the standard software to extrapolate with an exponential function because I understood that my brain alone could not handle exponential growth and I also understood that exponential growth is a thing and the spread of a virus can be near-exponential. I ended up calculating the first million cases in Germany for a much-too early date, but I was far from failing to understand how an unchecked wave would propagate before I saw any politician showing such understanding. Almost two years later, many people are way beyond just not understanding exponential growth; about a tenth to a fifth of the population appears to have performed a 10 m high dive into total bullshit, welcoming the bullshit, becoming one with the bullshit.

'Numbers are hard' was also at work in regard to military (im-)balance in Europe. I'm the kind of guy who looks into things like IISS "Military Balance" yearbook or studies and then actually compares the figures before trying to (in a fuzzy way) take into account the not really known qualitative differences and the geographic divides.

I do hardly ever see anything of this kind in any discussion or commentary. The usual opinion appears to pretend that the Russian army is the Red Army of 1989 with some new gear while European NATO hardly has any armed forces. Military think tank types tend to avoid giving written evidence of such thinking, but their written and published conclusions are often very much compatible with such a view.

Nowadays I see press reports (now I'm not talking about subject matter experts) about threatening Russian "force concentrations" on Ukraine's border. Yet whenever they become more specific such as stating "100,000 army troops" or a map, I cannot see any Russian army concentration on the Ukraine's borders AT ALL.

The supposed Russian army forces concentrations are outnumbered by the Ukrainian army (and the Russian troops and Russian proxy troops in Donbass don't change this picture to a clear Russian numerical superiority). Those supposed Russian army concentrations are also dispersed in great depth and width, but reading the scale on maps is hard, I guess. What do these press people suppose where the Russian army should have its troops, in Siberia? Does nobody remember how awfully close to the Iron Curtain the NATO had its forces throughout the Cold War? 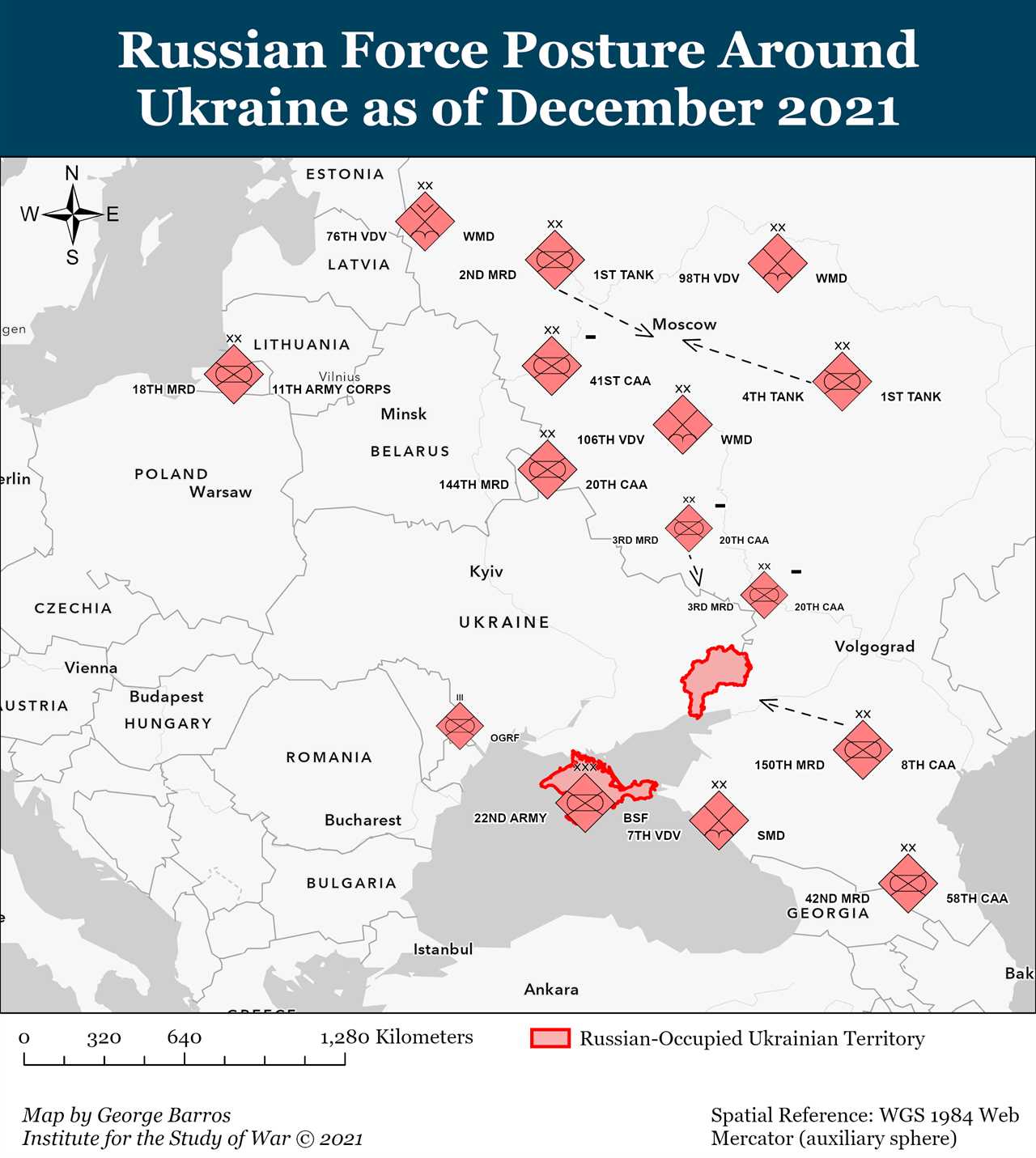 The total strength of the Russian Army in the Western and Southern Military Districts minus what's in the Kaliningrad Oblast exclave and what's indispensable near St. Petersburg and Moscow is still likely too much to bite for the Ukrainian Army, but that's not news. It's always been this way.
The press supposes we (or the Ukrainians) should be scared of "100,000 !!!!" Russians. Well, I'm not easily scared (I don't like to lean against large windows or lean over balconies and that's it), and I refuse to be scared by the alarmist news about the Russian army dispositions. The unusual thing is to move the troops out of their mildly comfortable barracks in wintertime and the really frustrating threat o the Ukraine is the vastly superior Russian air power. The actual quantity of boots on the ground near the Ukrainian border could be considered consistent with Russia positioning its troops for defence (I'm not saying this is the purpose).

So once again, a public too dumb or too lazy to pay attention to numbers and fairly simple calculations appears to misunderstand reality grossly.