Britain is looking to spend £458k on two tethered Uncrewed Air Systems for the Royal Navy with a flight time of 24 hours, a maximum payload of 25kg..

Britain is looking to spend £458k on two tethered Uncrewed Air Systems for the Royal Navy with a flight time of 24 hours, a maximum payload of 25kg and operational height of 90 metres.

The solution? They’re now looking for:

“A UAV system operating from a Tethered power supply is sought to allow considerably increased flight duration. The ability to flexibly integrate differing payloads is key to allow the UAS to operate as a platform for trials and testing.”

Specifically, the contract tender is for the supply of 2x Un-crewed Air Vehicles, with 2x compatible tethered power supplies, control interfaces and replacement batteries for use as experimentation and payload integration platforms by the Royal Navy.

“The Supplier shall provide 2x complete Tethered Un-Crewed Air Vehicles compliant with the mandatory requirements given above and the documentation as described above by 31 March 2022. Delivery shall take place to NavyX HMNB Portsmouth, UK.

Each complete Tethered UAV system will consist of the following as a minimum.

What is a Tethered UAS?

A tethered UAS is one where the unmanned aircraft remains securely attached (tethered) via a physical link to a person, the ground or an object at all times while it is flying. The tether normally takes the form of a flexible wire or a cable and may also include the power supply to the aircraft as well.

The below image shows a concept image for a naval Tethered-UAS and how it might operate. 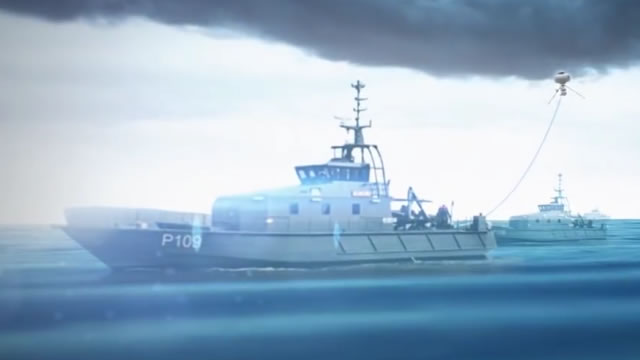 Operations with a tethered UAS can be used as an efficient solution in a number of cases, for example where an operating area is restricted, or when the required flight time exceeds the normal endurance of a free-flying battery-powered aircraft.

What kind of specifications are outlined in the tender notice?

According to the contract notice:

What kind of payloads are they thinking about?

Again, according to the contract notice:

When will the system be delivered?

Delivery of the system and associated documentation is planned for the 31st March 2022. The tendering period closes 19th January 2022, 10am.