Social media accounts of U.S. warships have been hacked

The Arleigh Burke-class guided missile destroyer USS Kidd (DDG-100) has had its official Facebook account hijacked by a light-hearted hacker who has..

The Arleigh Burke-class guided missile destroyer USS Kidd (DDG-100) has had its official Facebook account hijacked by a light-hearted hacker who has been livestreaming himself
playing ‘Age of Empires’ on the page.

This article was submitted by Sam Wheeler.

The breach of the Facebook account appears to of occurred sometime on Tuesday 30th September 2021 and streams have been going up every day since. 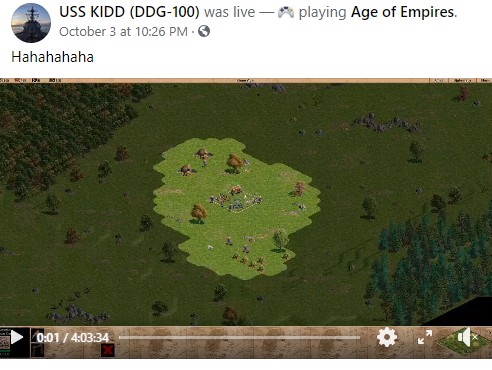 The US Navy still does not have control over the account, and whoever has taken control of the warship’s account has changed the page category to ‘Gaming Video Creator’.

When approached for comment, a Navy spokesperson, Cmdr. Nicole Schwegman, has said:

“The official Facebook page for USS Kidd (DDG-100) was hacked. We are currently working with Facebook technical support to resolve the issue.”

When probed a little further about how the hack had taken place, Cmdr. Schwegman stated that:

Several livestreams have appeared on the page over the past few days, the first appearing on Sunday at 2226hrs local time with the title ‘Hahahaha’.

Shortly after, a second video was posted at 0237 on Monday morning with the title ‘play game’ Three more videos followed with the final one being posted on Monday October 4th titled ‘POSC’.