Image: US National Institute of Allergy and Infectious Diseases In terms of its scope, Covid-19 is like no other disaster that has occurred in the.. 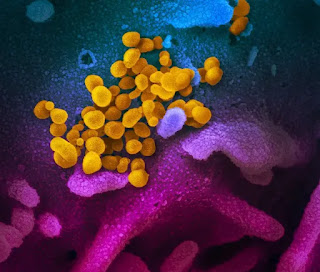 Image: US National Institute of Allergy and Infectious Diseases
In terms of its scope, Covid-19 is like no other disaster that has occurred in the last 100 years, since, in fact, the influenza pandemic of 1918-1920 killed more people than both world wars combined, and contributed to the end of the First World War. Despite this, the 2020 pandemic has obvious similarities with previous outbreaks of viral diseases and with many other kinds of disaster.

Distribution of vulnerability. Plenty of evidence exists to show that disasters have a disproportionate impact upon poor and vulnerable people. Covid-19 is no different in this respect. 'Front-line' workers include those who serve in hospitals, work in care homes, run public transport and deliver essential items. Many are poorly paid and few have had a choice about whether to come to work of stay at home. Suddenly it is clear that their work is essential to the running of society. They are the 'human infrastructure' on which we all depend. Paradoxically, this has not particularly strengthened the position of so-called 'key workers' in the hierarchy of labour or enabled them to negotiate better pay and conditions. Their increased exposure to infection has taken a considerable toll in terms of morbidity and mortality.

The role of emergency planning. The scenario for a major pandemic was developed over the period 2003-2009 and was first incorporated into emergency plans close to the start of this period. It followed the beginnings of a revival of interest among historians of disease and medicine in the (misnamed) 1918 'Spanish influenza' pandemic, which began at the end of the 1990s. By 2008, the scenario was more or less complete, with the exception of the recovery phase, which has remained difficult to predict ever since (recovery from the 1918-1920 pandemic took about five years, but it included recovery from the First World War and it led into the Great Depression of 1929).

Since the start of Covid-19 we have seen the failure of emergency planning, which is an indication of failure to provide foresight. Improvisation is permissible only where it is a necessary form of adaptation to those circumstances that genuinely could not have been foreseen in advance and which constitute the unique part of a disaster. Instead in many countries there has been frantic and often unsuccessful improvisation and a little basic analysis easily reveals that it could have been avoided by good planning. It remains unclear whether this lesson will be learned. Will we see the renaissance of emergency planning, and its widespread acceptance as a discipline to be taught and practised, or will we return to haphazard ways of confronting disaster? The failure of emergency planning is perhaps the greatest error made in the management of the Covid-19 disaster.

In emergency planning terms, many of the medical and epidemiological questions reduce to a simple 'yes' or 'no'. If neither answer can be confidently made, then the emergency managers simply have to do without a response. The difficulties begin with the logistics of managing the disease, for example, with the challenge of sourcing, acquiring and distributing personal protective equipment and antibody tests. Exigencies like this that are not conditioned by the scientific evidence derived from monitoring, analysing and publishing on the day-to-day progress of the disease. They relate to matters that can and should be sorted out years in advance.

Welfare and social discipline. We live in an age that is increasingly dominated by individualism and the concept of entitlement. It has been evident for decades now that these two traits are unsustainable. Covid-19 has taught the world an enormously important lesson about how to manage a crisis. Before the event, welfare was in decline, social relations were fractious in many places, and solidarity was under threat by exploitative forms of economics and hegemony. That is still perfectly true, but a geat lesson has emerged. Those countries that have weathered Covid-19 best have better welfare systems, more capable and responsive leaders, and populations that understand the primacy of social relations over individualism during times of existential crisis. Under duress, democracy means commonwealth rather than entitlement. The freedom of necessity tells us to sacrifice individual liberties in favour of collective protection. In this process, government shall not usurp its position as the servant of the people but must respond to the collective need, and people must support it.

This, of course, is a counsel of perfection under the conditions that prevail in the modern world. Identity politics should be subsumed by collective solidarity: instead it is reinforced as people retreat into their factions. The neuroses created by the things we have to do in order to survive the disease, in particular suffer lockdown and closure of productive activities, feeds discontent and protest. The leaders of some of the world's largest countries have consistently shown an inability to make rational, consistent and intelligent decisions about Covid-19. A close analysis of the data would no doubt be able to connect their decisions to preventable death tolls.

Democracy in action (or not). Disasters are participatory events. If people do not want to participate in the response to them, circumstances will usually force them to do so. Covid-19 has been the litmus test of democratic deficit. In each country, the intelligence and responsiveness of leadership and the comprehension and responsiveness of the people have defined the progress of the crisis. Risk management is suddenly revealed to be an imperative, a daily task and the responsibility of everyone. Those who opt out of it undermine the response to the crisis.

Sadly, another casualty of Covid-19 has been international relations. The emergency has been managed resolutely at the national level, irrespective of whether that is the right or wrong geographical scale at which to tackle it. At more local scales, we see blanket measures applied to regions with widely varying needs generated by the progress of the disease. Alternatively, we see how intelligent decentralisation improves that picture, but we also see the tremendous challenges of harmonising responses across regions, and we will increasingly see the difficulties of managing interregional transfers. Internationally, the greatest lesson of the previous SARS pandemic (2002-2004) was that international cooperation was the key to reducing its impact. Instead, Covid-19 has had negative impacts on some aspects of international exchange. While scientists have worked without boundaries to understand the disease and provide remedies, politicians have retreated into unilateralism, to the detriment of the very organisations that are best placed to provide the international coordination, such as the World Health Organisation.

Existential threats. It is evident that the world faces challenges at a different order of magnitude to many previous risks. Climate change is at the root of some of them. Covid-19 has shown that a new form of organisation is needed to tackle such risks. To be ready for existential threats, the world needs foresight, planning, welfare, greater equity, better governance, cooperation, decentralisation but internationalism, and better democracy of both the participatory and representative kinds.

In conclusion, Covid-19 is both unlike other disasters and so like them as to be an amalgam of many of their characteristics. As a result, it provides strong lessons for the management of all disasters, large and small. It also provides a warning about what is to come. Will climate change reach a critical juncture first, or will their be an influenza pandemic before that happens...?