According to the November jobs report, Black women are leaving work force

The Bureau of Labor Statistics’ (BLS) November jobs report, released December 3, provides mixed news about the state of the nation’s economic recovery. Total nonfarm payroll employment increased by 210,000 jobs, compared to October’s increase of 531,000, and unemployment decreased by 0.4%, to 4.2%. BLS reports that “nonfarm employment has increased by 18.5 million since April 2020 but is down by 3.9 million, or 2.6 percent, from its pre-pandemic level in February 2020.”

Most of the job gains for November occurred in professional and business services, transportation and warehousing, construction, and manufacturing. The COVID-19 pandemic continues to negatively affect service industries, particularly retail trade, which saw a decline of 20,000 jobs in November. Some of this decline is offset by gains in food and beverage stores (9,000 jobs added) and building material and garden supply stores (7,000 jobs), but retail trade employment remains 176,000 jobs lower than in February 2020. Employment in leisure and hospitality remained largely unchanged in November, and the industry is still down by 1.3 million jobs, or 7.9%, compared to February 2020.

While health care employment was largely unchanged, nursing and residential care facilities lost 11,000 jobs. The BLS report further notes that health care employment is down 450,000 jobs since February 2020, with most of those losses concentrated in nursing and residential care. This job loss is likely accelerated by worker burnout and the vaccine mandate for employees.

Though the overall economic picture in the jobs report is slightly positive, there are sharp racial disparities in terms of employment. The biggest item to note is the dramatic drop in the number of Black women in the labor force—a phenomenon likely driven by ongoing disruptions to child care. Beyond this change to labor force participation, ongoing concerns include the effects of inflation and the uncertainties of the pandemic with the arrival of the Omicron variant.

An alarming loss of Black women in the labor force

Table 2 shows the U.S. unemployment rate by race, gender, and age from November 2020 to November 2021. Even in the face of an overall positive trend in the employment situation, November saw an increase in the unemployment rate for Black teens (ages 16 to 19): from 16.1% in October 2021 to 21.9% in November 2021, a rate that is 12.6 percentage points higher than the current rate for white teens. Black teens have the highest 13-month average unemployment rate, at 17.15%. Jobs in retail and hospitality—the primary employers of teens—have been negatively impacted by the pandemic. Restaurants and retail outlets have reopened but are struggling to hire and retain adult workers; this provides employment opportunities for teens, yet these opportunities do not appear to be benefiting Black teens. 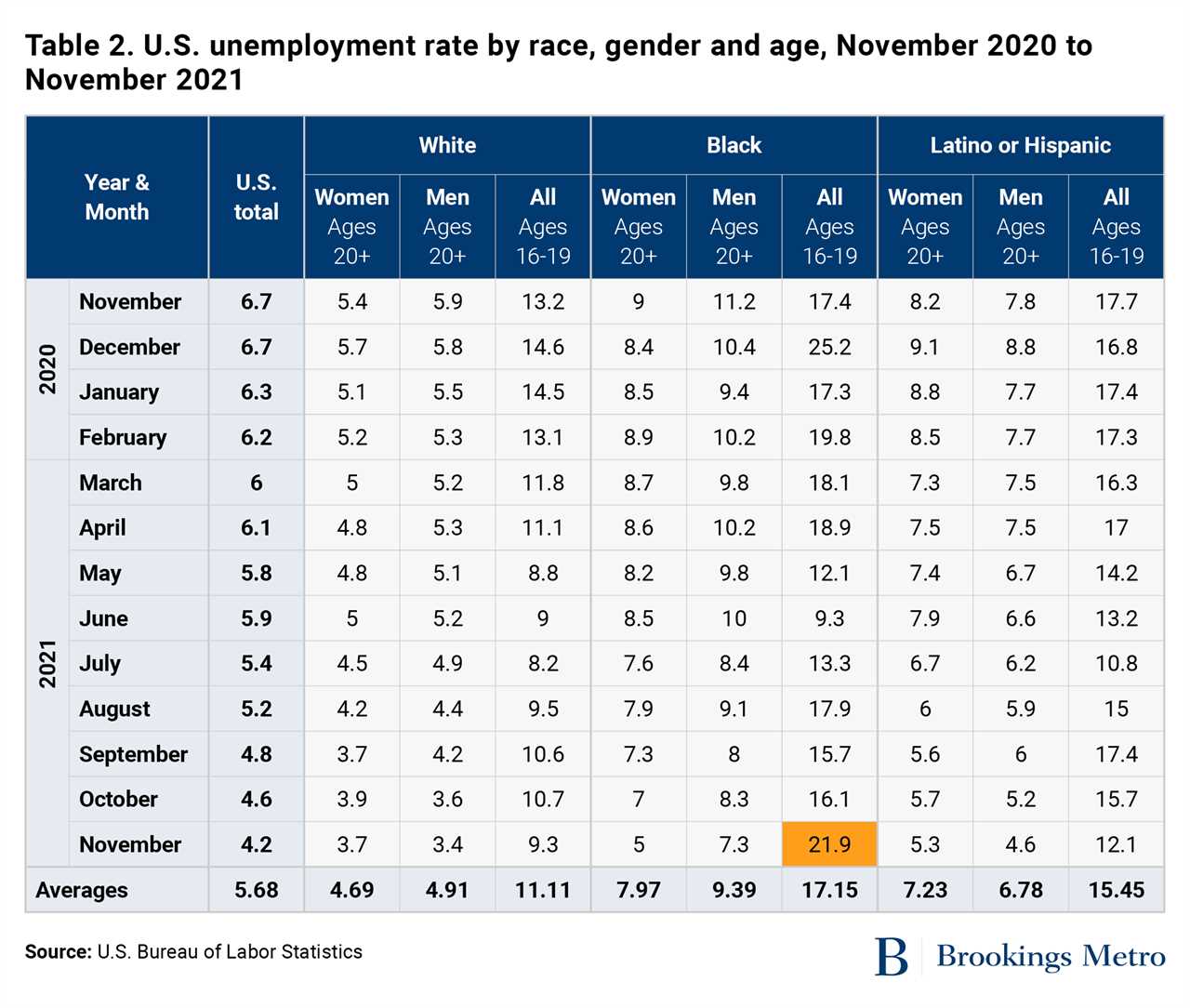 Meanwhile, the return to in-person school instruction has coincided with an alarming increase in Black women exiting the labor force. Between October and November, the labor force participation rate for Black women dropped to 60.3%, effectively erasing the impressive gains reported in August. This 1.5 percentage point dip represents a weakening attachment to the workforce for Black women in recent months: 181,000 of them have exited the workforce since September, with more than half (91,000) exiting in November alone. This reversal in labor force reentry is unique to Black women, as women in other racial-ethnic groups continued to regain their footing in the workforce. 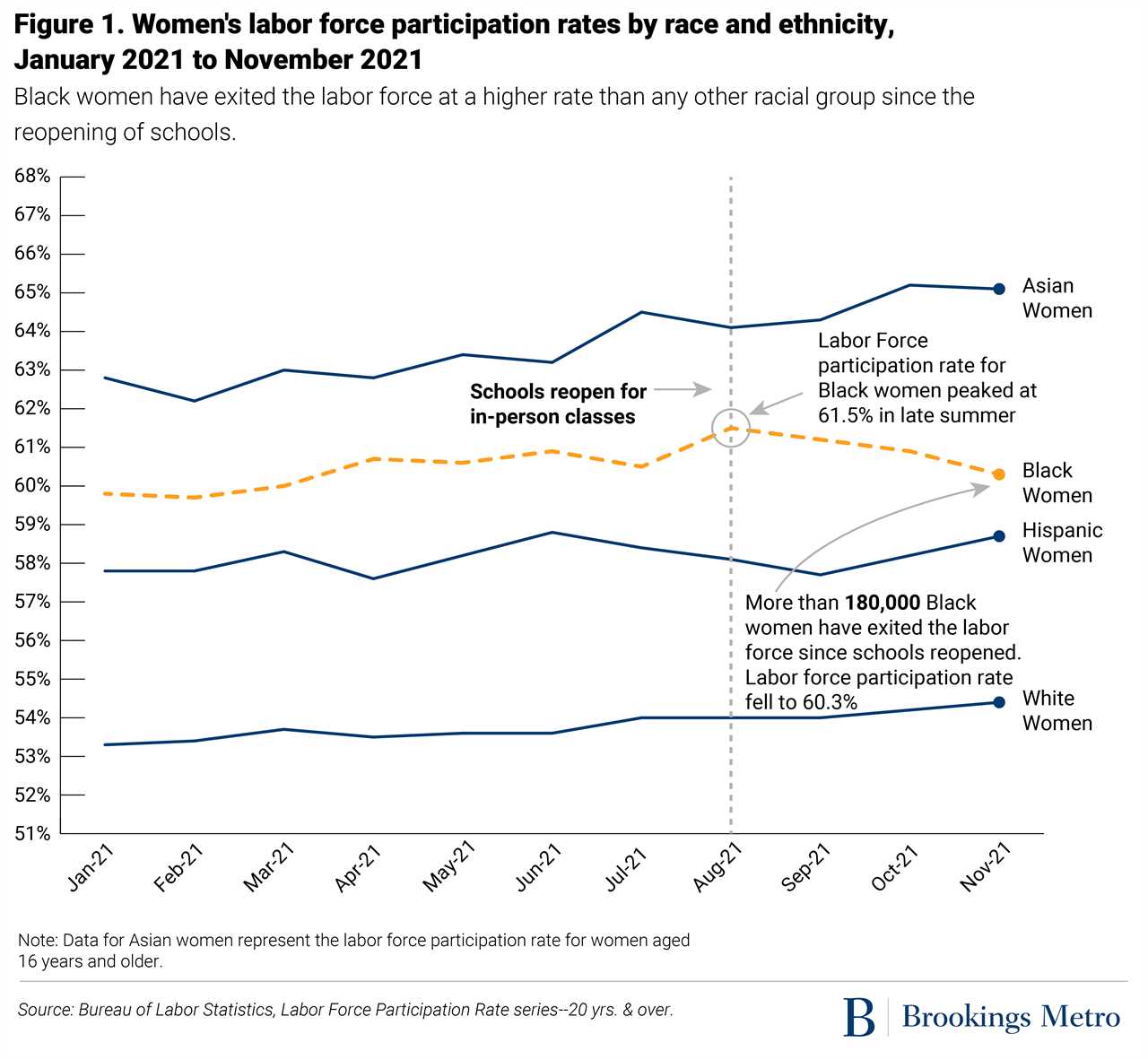 Increasing vaccination rates among children will be instrumental in supporting the economic recovery for Black women. However, vaccines need to work in tandem with targeted economic policies that create on-ramps to the job market for women—particularly, Black women with child care needs.

The nation’s child care infrastructure is in a fragile state, after recovering 90% of its workforce relative to February 2020. Roughly 108,000 workers are still missing from this sector, where women dominate the workforce and wages skew toward the lower end of the distribution. Furthermore, child care center failures add to the recovery’s unevenness; this is particularly true for local communities grappling with the loss of child care centers. A Columbia University study tracking child care center closures estimated that Black, Latino or Hispanic, and Asian American families were disproportionately exposed to child care facility closures, and that a considerable number of these closures may be permanent.

Wages are increasing, but inflation is taking its toll

Pandemic-induced labor shortages have given workers more leverage, while their earnings have increased at the fastest pace in 40 years. However, price inflation is negating many of those higher wages.

The Consumer Price Index for All Urban Consumers (CPI-U) increased 6.2% between October 2020 and October 2021 before seasonal adjustment—the largest one-year increase since the period ending November 1990. Between September and October 2021, the CPI-U increased 0.9%. According to BLS data, average hourly earnings for all employees increased 0.4% during the same period. And when inflation is taken into account, real average hourly earnings decreased 0.5% in October.

The renomination of Jerome Powell to lead the Federal Reserve suggests that the Biden administration is looking to reassure markets in the face of lingering inflationary pressures. In recent comments to the Senate, Powell signaled that the Fed is worried inflation will persist for longer than initially expected, and suggested that it will taper off asset purchases sooner than expected. While the markets responded well to the news that Powell would be renominated, his comments on inflation sparked concern.

Though several high-profile progressives opposed Powell’s renomination, they are likely excited about the nomination of Lael Brainard to the role of vice chair. In a speech given earlier this year, Brainard emphasized the importance of inclusive indicators and the goal of full employment: “The headline unemployment rate by itself can obscure important dimensions of labor market slack, so it is important to…consult a broad set of aggregated and disaggregated measures.” She also noted that tighter labor markets can improve equity, saying “groups that have faced the greatest challenges often make important labor market gains late in an expansion.”

As we face another pandemic winter, the World Health Organization has recently identified a “variant of concern” which they’ve named Omicron. Commerce Secretary Gina Raimondo expressed concern about the potential impacts of the variant for the labor market: “It’s too soon to tell, but I do think it’s real—not just because of the outbreaks, but because of people’s fears to show up. It’s massively disruptive.”

The Biden administration has announced several measures in response, including expanded at-home testing, continued mask mandates while flying or on public transit, and updated travel requirements for those entering the country. The administration is also continuing to encourage all adults to get a vaccine booster shot.

As we prepare for the holiday season, Omicron and other factors are still fueling great uncertainty in the broader economy in terms of labor markets, supply chains, and consumer behavior. The low unemployment rate continues to underscore the significance of the economic recovery, but the still high unemployment rate for Black workers and the dropping labor force participation rate for Black women serve as reminders that we are still far from a full recovery.