Can President Biden and his Democrats pull out of this hole?

By William A. GalstonIntroductionAs President Biden begins his second year in office and the battle for control of Congress in 2022 heats up,..

By William A. Galston

As President Biden begins his second year in office and the battle for control of Congress in 2022 heats up, Democrats find themselves in a deep hole. Early in Biden’s administration, 55% of Americans approved of his performance; today, his job approval has fallen to 42%. Polls conducted during the past three weeks show Democrats trailing Republicans by an average of 4 percentage points in the aggregate vote for the House of Representatives.[1]

This disadvantage in the “generic” House vote is even more significant than it appears. Because Democratic votes are distributed less efficiently among congressional districts than are Republican votes, Democrats need an edge of at least 2.5 percentage points to retain control. In 2016, a Republican advantage of just 1 percentage point translated into a 47-seat House majority. In 2012, a 1-point Democratic popular vote advantage left Republicans with a 33-seat majority. By contrast, it took a massive 8.6 percentage popular vote victory to give Democrats a comparable 36-seat majority in 2018.

Contrary to early expectations, the redistricting process after the 2020 Census is likely to leave the House’s existing partisan tilt about where it is now. But the parties have pursued different strategies. While Republicans have focused on making their seats safer, Democrats have sought to increase the number of districts where they have a reasonable chance of winning. This strategy will increase Democratic gains when the popular vote balance is favorable to them, but at the cost of increasing their losses when the vote turns against them. In these circumstances, the Republicans’ current 4-point edge in the generic House vote would likely produce a massive seat swing in their direction.

There is a strong relationship between President Biden’s public standing and Democrats’ prospects in the forthcoming midterm elections. A recent study found that in this era of polarized and nationalized politics, a president’s job approval does more to influence midterms than does any other factor. Another analysis shows that Biden’s low job approval in swing states is weakening Democratic candidates for the Senate. Unless Biden can move his approval from the low to the high-40s, Democrats have virtually no chance of retaining their House majority or of continuing to control the Senate.

Voters have downgraded their evaluation of the president’s performance across the board, but his losses on two key issues that were key to his campaign—dealing with the pandemic and bringing the country together—have been especially steep. 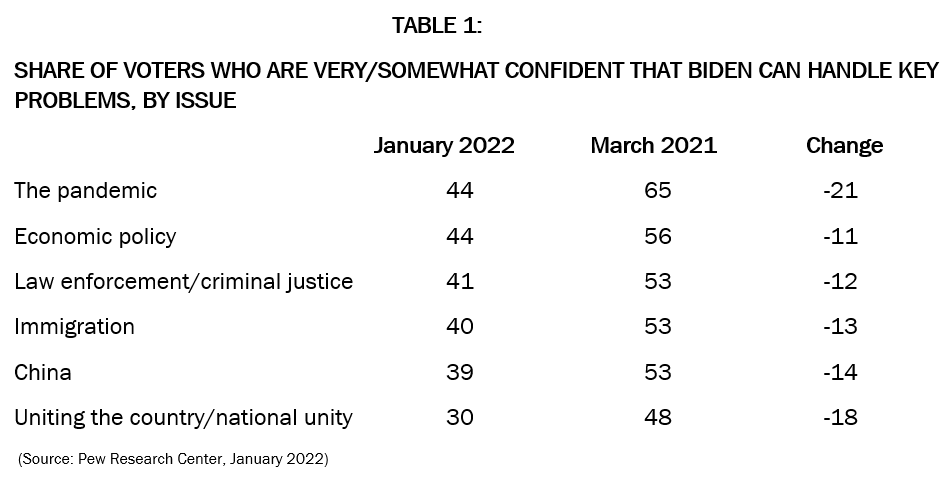 Which voters have changed their minds about President Biden?

To understand what it would take for President Biden to improve his public standing, let’s examine which voters have moved from approval to disapproval, and why. A recently released report from the Pew Research Center offers some answers.

In early 2021, when public approval for President Biden was at its peak, support among Independent voters who said they “lean” toward the Democrats stood at 88%, nearly as high as among voters who identify as Democrats (95%), and differences between strong and not-strong Democrats were insignificant. Since then, the gap between these groups has widened significantly. While the president’s ratings among Democrats have declined by 19 percentage points (from 95% to 76%), they have declined by 32 percentage points among “Leaners,” and a 22-point gap has opened between those who say they are “strong” and “not strong” Democrats.

Other survey data supports Pew’s findings. For example, compare two polls conducted by the Economist and YouGov, the first in mid-March of 2021, the second in the third week of January 2022. Among all voters, President Biden’s job approval has declined by 15 points. But it has declined by 21 points among Independents and 22 points among moderates.

A Gallup survey, which examined the impact of partisanship but not ideology, found that the decline in Biden’s personal ratings was driven mainly by shifts among Independents.

A key reason for these shifts—moderates and Independents now view President Biden as less moderate and more liberal than they did at the beginning of his administration.  When asked to place Biden on the ideological spectrum from very liberal to very conservative, here’s what they said:

During this period, moreover, the share of these voters who saw Biden as very liberal rose by 6 percentage points among both moderates and liberals.

While President Biden has suffered reverses across the board, he has lost more ground among voters in the center of the electorate than on the left. If he is to regain support among moderates and Independents, he must work harder to overcome their objections to the way he has positioned himself during his first year in office—including their perception that he has governed farther to the left than they expected when they voted for him in 2020.