December's Jobs Report reveals that there is a growing gap in racial employment, particularly for Black women.

The Bureau of Labor Statistics’ (BLS) December jobs report, released January 7, provides some good news for the state of the nation’s economic recovery, yet the increase in jobs was lower than expected and disparities remain across race and gender.

“2022 is not only a new year, it’s a new horizon for the American labor market—and [last week’s] disappointing report suggests we have some work to address supply and match challenges,” Becky Frankiewicz, regional president of ManpowerGroup North America, told Brookings Metro.

In December, total nonfarm payroll employment increased by 199,000 (lower than the 422,000 forecasted) and the unemployment rate decreased from 4.2% to 3.9%. The number of unemployed persons fell by 483,000, to 6.3 million. While these numbers indicate a robust economic recovery, December’s unemployment rate was still higher than in February 2020, prior to the pandemic. 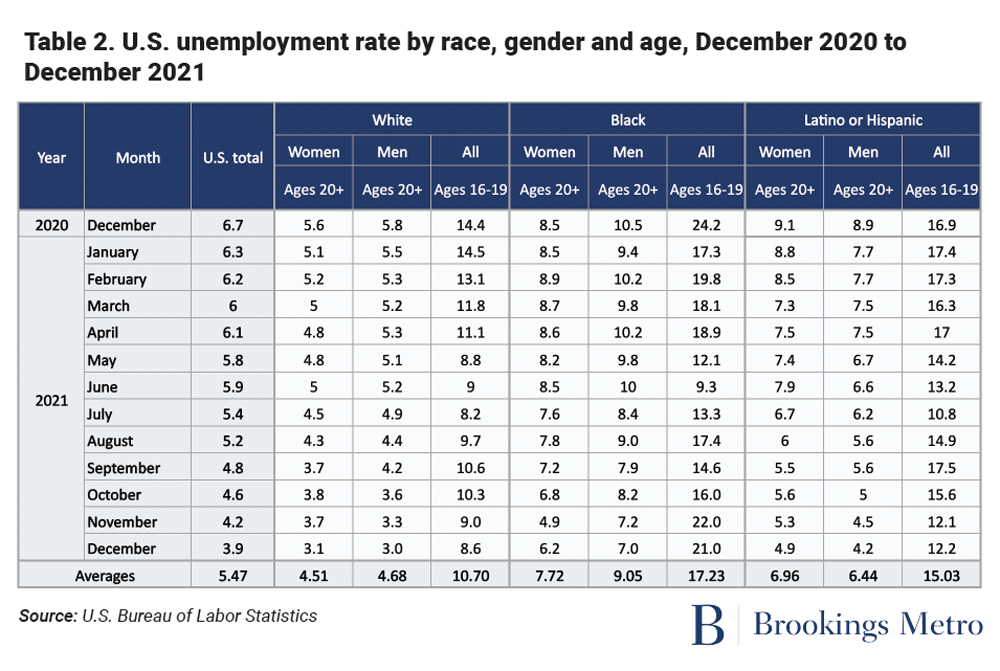 The largest increases in the number of quits occurred in accommodation and food services; health care and social assistance; and transportation, warehousing, and utilities. The number of workers quitting their jobs during the pandemic has been higher in low-wage sectors, as workers take advantage of increased labor demand to look for jobs with higher wages and better working conditions.

In a recent analysis of BLS data,  Economic Policy Institute senior economist Elise Gould wrote, “The media has focused on the high quits rate, but what’s often missing from that coverage is that workers who are quitting their jobs aren’t dropping out of the labor force, they are quitting to take other jobs.” Indeed, given that hires exceed quits in every sector, it is likely that many workers are switching to better paying jobs within the same sector. Gould also noted that “the labor force fell by nearly 8 million workers in March and April 2020 and has regained about 70% of those losses since then.”

This data, while lagging a month behind the jobs report, suggests that labor markets across sectors are still tight, providing workers with leverage and making it easier for unemployed workers to quickly find jobs. Nevertheless, the decrease in job openings also makes sense given that both the November and December jobs reports reveal a lower number of added jobs than was forecasted.

The Fed is shifting monetary policy to cool the economy

In its December meeting, the Federal Reserve signaled that it would speed up its tapering of bond purchases and likely hike interest rates as early as March, with two more subsequent hikes spread throughout the year to cool off the economy. Several members also advocated for diminishing the Fed’s bond portfolio.

This monetary shift reflects changes in the Fed’s assessment of both full employment and inflation metrics. According to the meeting minutes, “many participants saw the U.S. economy making rapid progress toward the Committee’s maximum-employment goal” and “several participants viewed labor market conditions as already largely consistent with maximum employment.” Regarding inflation, the minutes reveal that “participants remarked that inflation readings had been higher and were more persistent and widespread than previously anticipated.” In addition, “while participants generally continued to anticipate that inflation would decline significantly over the course of 2022 as supply constraints eased, almost all stated that they had revised up their forecasts of inflation for 2022 notably, and many did so for 2023 as well.”

Fed participants are still looking to a broader range of indicators to evaluate economic conditions, including racial disparities. The minutes state that “a few participants noted the recent decline in the unemployment rates of African Americans and Hispanics and the narrowing of the racial and ethnic gap in the prime-age employment to-population ratio as suggesting a more inclusive labor market recovery.” But given this most recent jobs report, it is clear that the recovery is far less inclusive than was previously hoped.

The Omicron variant continues to disrupt the economy

According to the Centers for Disease Control and Prevention (CDC), as of January 6, 74% of the U.S. population had received at least one dose of the COVID-19 vaccination, 62.4% were fully vaccinated, and 35.3% had received a booster dose. COVID-19-related hospitalizations and deaths remained concentrated among the unvaccinated, with unvaccinated people being nine times more likely than fully vaccinated people to be admitted to the hospital with COVID-19. In addition to the long-term personal health impacts of COVID-19, the business and economic risks associated with unvaccinated employees include exposure and infection of other employees and customers; hospitalization expenses; apprehension for employees and customers to come to a workplace with lower rates of employee vaccination; and risk of business closure due to insufficient staffing.

On December 1, the CDC announced the first confirmed case of the COVID-19 Omicron variant in the United States—likely a late indicator of spread that was already taking place. Over the course of the month, Omicron  became the dominant strain in the U.S., and led to large increases in the number of COVID-19 cases. While Omicron’s full economic impacts remain to be seen, it is a likely cause of the muted numbers in December’s job report. In response to the Omicron variant, Reuters reports that Mark Zandi, chief economist for Moody’s Analytics, adjusted his projection for first quarter economic growth from 5% to 2%. “Omicron is already affecting people’s behavior and business practices,” Zandi noted, which can be observed in lower credit card spending and less dining out.

In addition to depressing economic growth, the new variant could also fuel inflation concerns. “To the extent that Omicron causes people to be unable to work, that does have the potential to exacerbate supply chain issues and push up pricing,” PNC Bank chief economist Gus Faucher told CNN. This effect might be offset by a change in the CDC’s recommendation from 10-day isolation to five days for people with COVID-19 who are experiencing diminished symptoms—a policy change that commercial interests such as airlines lobbied for and has led to reductions in paid sick leave by firms such as Walmart.

Finally, it is unclear what the impact of this variant will have on schools and child care access, which could also affect labor force participation and employment ratios in the short term.

Racial disparities must be addressed before the economic recovery cools

Now that the Fed is shifting its monetary policy, it is likely that the labor market will grow slacker, which will codify these racial disparities over a longer period. As the Omicron variant continues to impact economic conditions, it is crucial that policymakers continue to use all available tools to aid economic recovery for everyone.