By Stephanie Aaronson, Mitchell Barnes, Wendy EdelbergA welcome development as the labor market has continued to recover since spring 2020 has been a ..

The effectiveness of a strong macroeconomy in ameliorating inequities in labor market outcomes has led advocates and economists to call on the Federal Reserve’s Federal Open Market Committee to set policy so as to promote a hot labor market. And in fact, the framework the FOMC announced in August 2020 specifically refers to its employment mandate as a “broad and inclusive goal,” which FOMC members have discussed as including a focus on disparities in labor market outcomes among other things. The FOMC also articulated a new strategy for achieving this goal: focusing on shortfalls of employment from its maximum level, rather than on whether employment was deviating from its maximum level in either direction, in determining whether to raise interest rates. This represented a significant shift in how the FOMC discusses and implements the employment half of its mandate.

The pandemic ended the longest expansion in U.S. history and reversed progress in narrowing racial disparities in labor market outcomes. As shown in figure 1, in the two years leading up to March 2020, the unemployment rate remained at or below 4 percent—a level economists previously believed could not be maintained without sparking unwelcome inflation; instead, inflation remained low while the prolonged strong macroeconomic conditions brought widespread benefits. 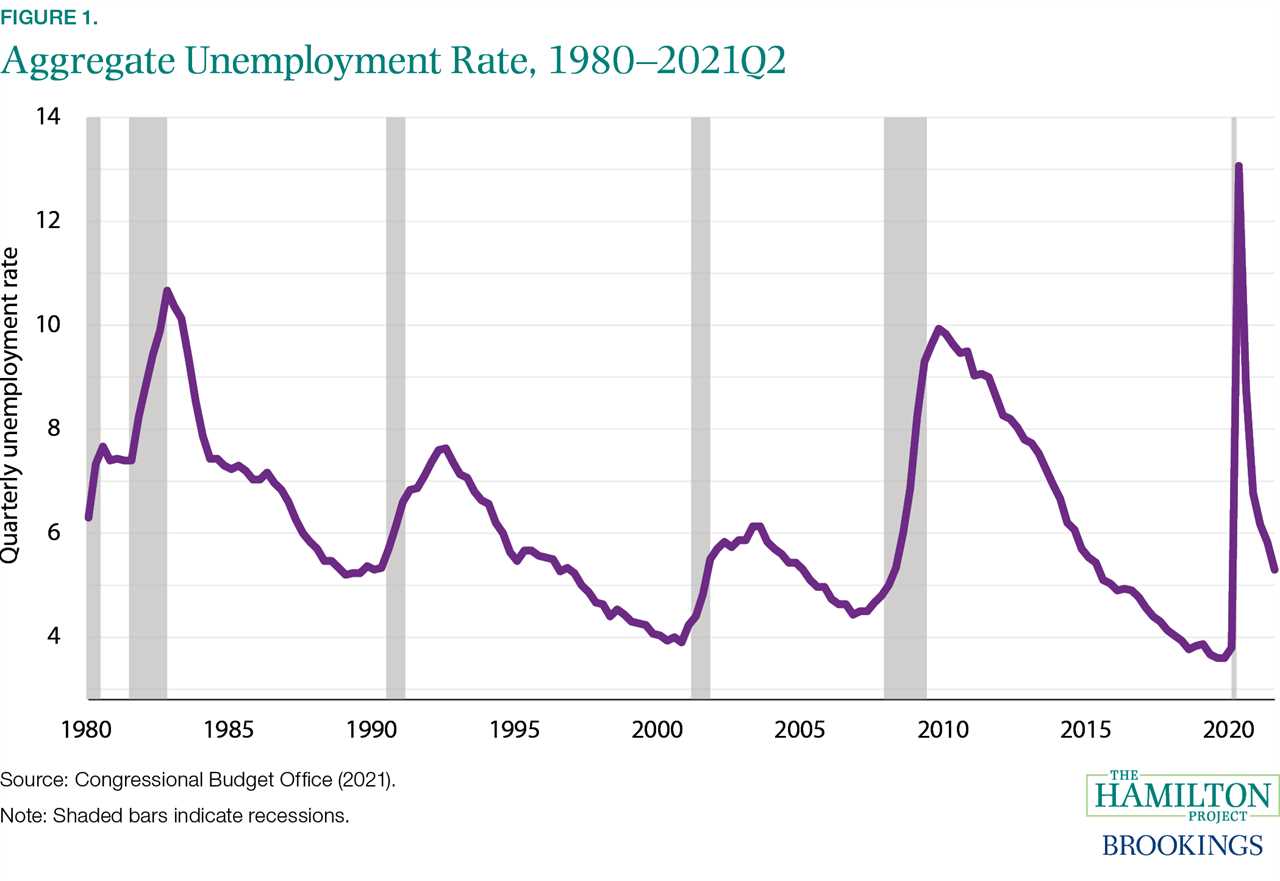 Just prior to the onset of the COVID recession, groups that have been relatively disadvantaged in the labor market, including Black and Hispanic workers as well as workers with less than a college education, experienced strong employment growth and their unemployment rates reached historically low levels. Moreover, wage gains at the lower end of the wage distribution were particularly strong, yet these wage gains did not result in unwelcome increases in the overall cost of goods and services. The sharp recession caused by the pandemic immediately widened disparities in labor market outcomes. Those disparities are evident comparing men and women, and comparing workers by race, ethnicity, and level of education. 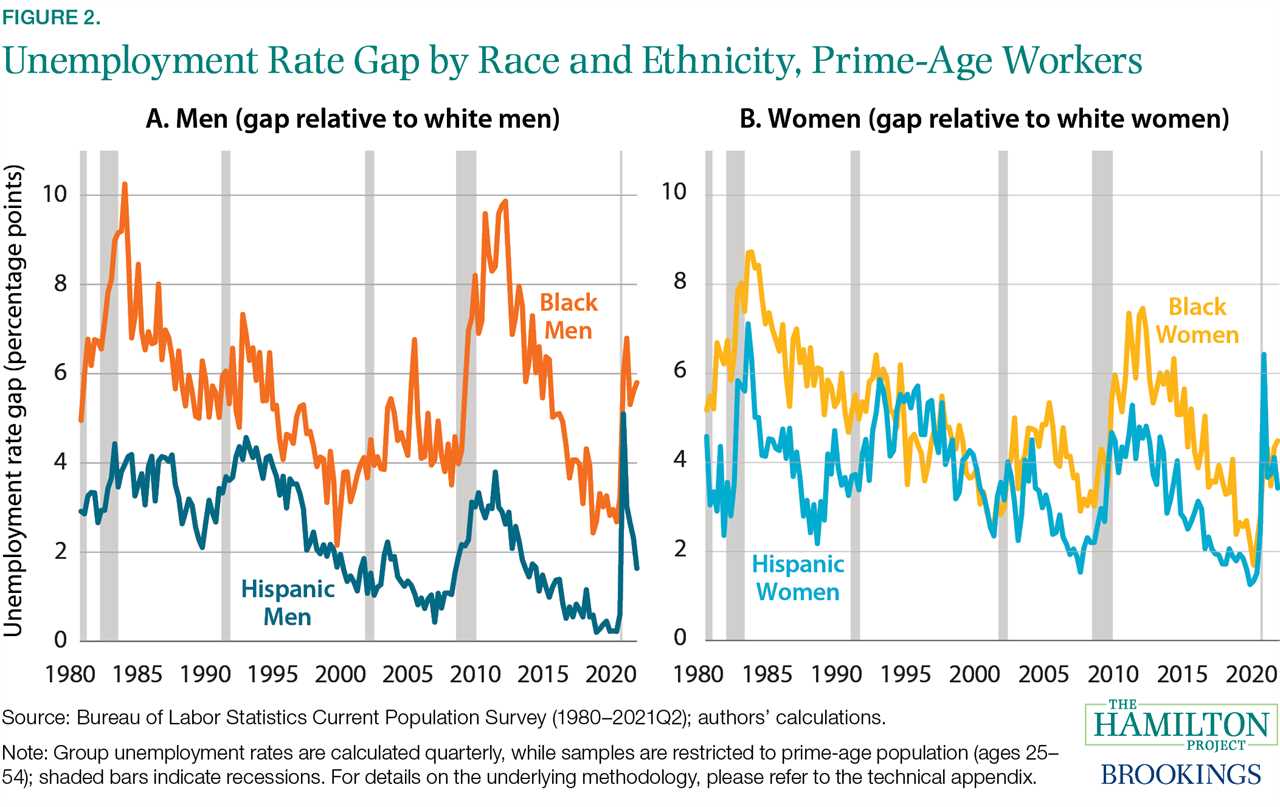 What a hot economy can and cannot do

Closely following the analysis in Aaronson, Daly, Wascher and Wilcox (2019), we show that a hot labor market is generally associated with disproportionately large declines in the unemployment rates for Black and Hispanic men and women.[2] We analyze the relationship between unemployment gaps and the difference between the actual aggregate unemployment rate and non-cyclical unemployment rate, as estimated by the Congressional Budget Office (which the agency previously referred to as the natural rate).

Figure 3a shows the analysis for Black men. The dots in blue correspond to cold periods; the dots in red correspond to hot periods. The solid dots represent the observations from the 2008 to 2020 business cycle, while the hollow dots represent other periods. The blue line and the red line show the estimated relationship between the two measures in the hot and cold periods with the level of the lines calibrated to the most recent business cycle from 2008 to 2020. Finally, the black square shows the data point corresponding to the latest month. Figure 3b shows the same analysis for Hispanic men. Figures 4a and 4b are similar to Figures 3a and 3b but show the results for women. 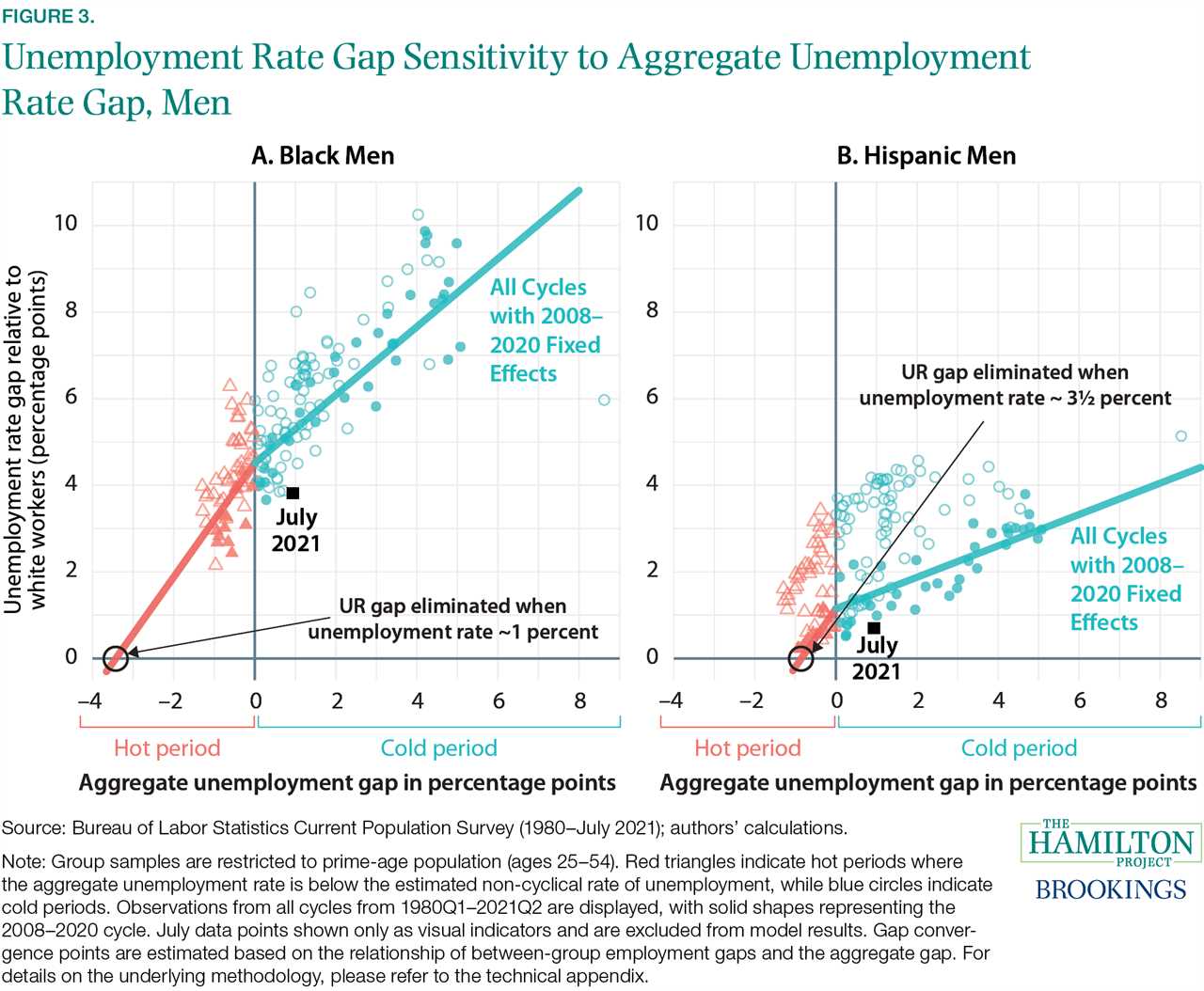 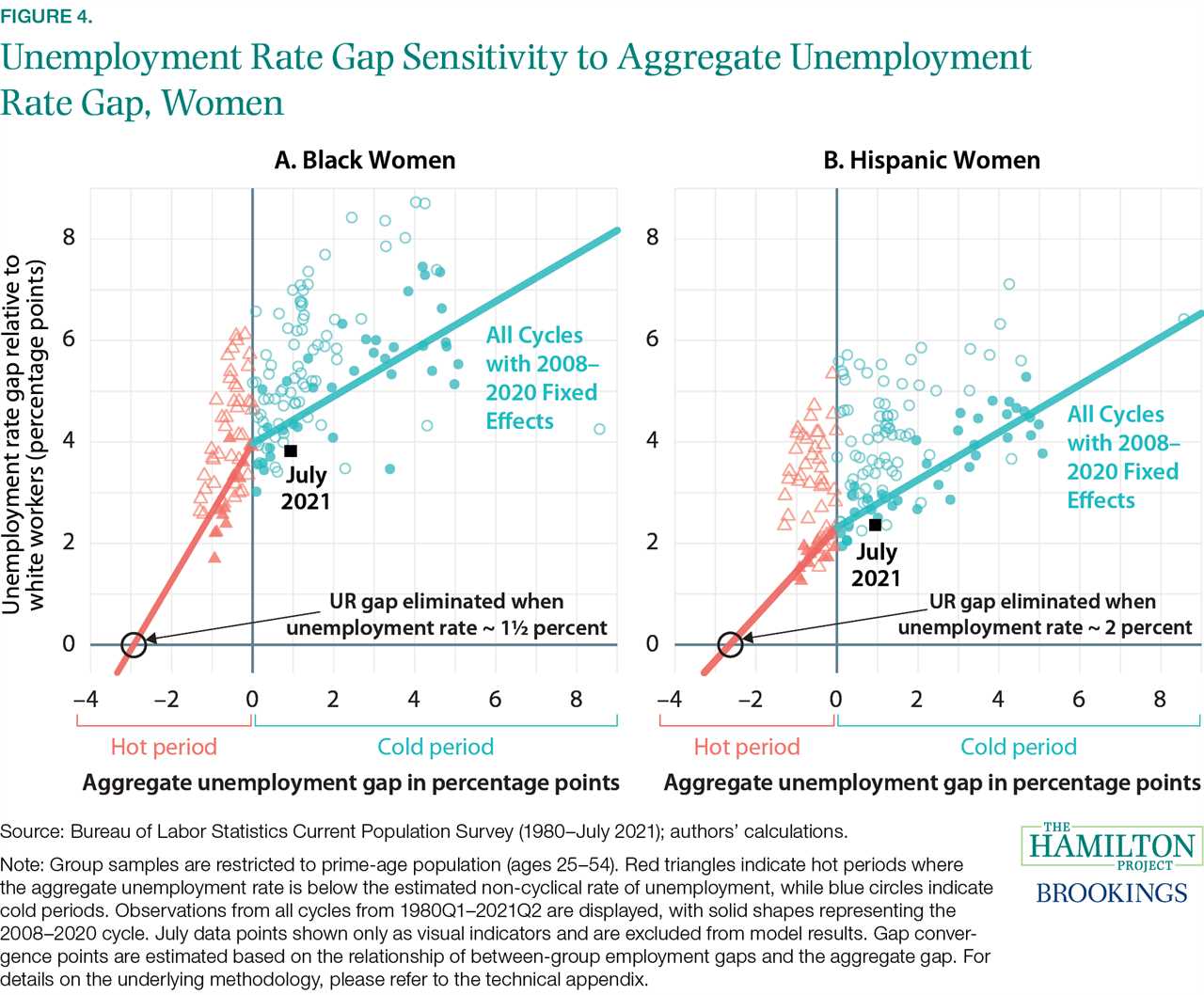 Nonetheless, history and this analysis suggest that it would be very difficult to close the gaps based on strong macroeconomic performance alone. Moreover, in our assessment maintaining such an exceedingly tight labor market would create inflationary pressures that would undermine the real purchasing power of the very same workers the policy was meant to benefit. In addition, while there is evidence that hot labor markets can create persistently better labor market outcomes for some (including lower unemployment rates and higher labor force participation rates), the improvement in aggregate unemployment rate gaps is undone during recessions. The sudden pandemic recession demonstrates how quickly gaps in labor market outcomes can reemerge if (and when) the economy deteriorates. To fully and durably eliminate the disparities in unemployment rates between Black and white men or between Black or Hispanic women and white women, structural changes will be required.

What structural changes can do to eliminate inequality

If a strong labor market would not on its own be enough to eliminate the gaps in unemployment rates and other labor market outcomes, what is necessary? The answer is structural changes that influence how different groups fare regardless of the strength of the labor market, such as changes to the institutions, policies, and attitudes that shape the economy and the opportunities available to those who participate in it.[4]

Structural changes can be seismic—and certainly have the potential to be large enough to reduce the labor market disparities observed today. Take the dramatic rise in women’s labor force participation in the second half of the 20th century. An observer in the early 1950s might have taken as given that the percentage of women working for pay would remain about 35 percent. By 1995, the rate was nearly 60 percent. Although gaps in labor market outcomes between men and women persist, the economic benefits of that development were significant both for women, individual families, and the macroeconomy. This structural change was made possible by evolving attitudes, technology, and policies that encouraged and enabled women to enter and stay in the labor force.

In the context of the model results presented above, structural change should be thought of as changing the relationship between aggregate labor market outcomes and those for certain demographic groups. In other words, successfully making the structural changes described here would have two effects. Most important, such changes would close the gaps in labor market outcomes across demographic groups regardless of the level of the aggregate unemployment rate and the tightness in the labor market. In addition, because the unemployment rates of Black and Hispanic workers would be converging to those of white workers, the non-cyclical aggregate unemployment rate would likely decline, which would benefit the entire economy.

There are many excellent and actionable ideas that policymakers should consider in solving these long-standing problems. The Hamilton Project has published numerous proposals to close gaps in labor market outcomes based on gender, race and educational attainment.

A Hamilton Project framing paper by Bradley Hardy, Trevon Logan and John Parman, which documents many of the long-term factors that have led to racial inequities in labor market outcomes, gives a sense of the enormity of the challenge. Ryan Nunn wrote an economic analysis showing the ways in which occupational licensing requirements create racial and gender barriers to certain kinds of jobs. A proposal by Lisa Cook offers steps to reduce racial inequities in the innovation process, and a proposal by Michael Barr offers ideas to reduce barriers for under-represented minorities and women in entrepreneurship.

The Hamilton Project has also published many proposals to improve economic outcomes for those with less formal education. Harry Holzer wrote a proposal for building a more coherent workforce development system. Richard Arun and Mitchell Stevens wrote a proposal to improve online education outcomes, bridging the divide between academia and the workforce system. In addition, Daniel Shoag wrote a proposal for The Hamilton Project that would break down barriers for people to more easily move to high-productivity areas, disproportionately improving outcomes for those with less education. Implementation of those proposals would improve both labor force participation and labor market outcomes, creating more opportunities for career advancement and giving people the skills to take advantage of those opportunities.

And although we haven’t focused on women’s labor force participation in this piece, the fact remains that participation rates among women has flattened out at a level well below that of men and below that of women in most other advanced economies. Several proposals would break down many of the barriers to labor force participation that parents of young children – particularly mothers – face. For example, Elizabeth Davis and Aaron Sojourner offer a proposal to expand access to high-quality, affordable early childhood education. In addition, Tanya Byker and Elena Patel propose a system that would provide federal paid parental and medical leave.

Structural changes would also boost the growth rate of the economy

In this piece we have focused on the need to implement policies that will reduce the structural barriers that result in disparate labor market outcomes for disadvantaged workers. However, it is worth pointing out that policies of this nature are also likely to promote economic growth. The increase in female labor supply in the second half of the 20th century contributed nearly 1 percentage point to real GDP growth on average per year, holding productivity constant. Moreover, an economic literature shows us how much stronger our economy is because people of all races, genders, and ethnicities are able to make better use of their skills, boosting productivity. And, that literature speaks to how much stronger the US economy would be going forward if we made further progress on those dimensions.

The recession that has accompanied the COVID-19 pandemic was very unusual, in that the shock that shut down the economy—the pandemic—was unrelated to the economy. The result has been that as the pandemic has been controlled, economic activity has steadily recovered, and at a much faster pace than most economists predicted at the outset. Even the large gaps in unemployment rates that opened up between Black and Hispanic workers and white workers and between women and men have steadily declined, although they remain above pre-pandemic levels. At the same time, since spring 2020, lower-wage workers have seen much stronger wage gains than other workers.

That said, it is possible that the pandemic will persistently widen disparities in labor market outcomes across groups. Industries such as hospitality and leisure and retail sales, which hire disproportionate numbers of women (women of color in particular), could see substantial structural change, if new habits for business travel and shopping created during the pandemic persist even when the pandemic recedes. And these structural changes will come on top of the disparities that have persisted for decades. Those factors offer all the more reason that policymakers should act boldly to enact change that will make the economy more equitable.

[1] An examination of the rates of non-employment of those men takes into account differences in rates of labor force participation, which are lower on average for Black men and higher on average for Hispanic men. In 2018 and 2019, the difference between the non-employment rates for Black men and white men between the ages of 25 and 54 was at its lowest level since 1976, having fallen steadily for almost a decade to about 9 percentage points. In July 2021, that difference was back to 11 percentage points, wiping away nearly half of the recent decline. The reversal is even starker for men (regardless of race or ethnicity) with less than a bachelor’s degree.

[2] See the technical appendix for an explanation of the differences between the empirical model used here and the models introduced in Aaronson et al. 2019.

[3] In addition, a similar model that instead focuses on non-employment rates for Black men shows that even an unemployment of zero would not eliminate the nonemployment gap between Black men and white men.

[4] The need for structural change does not obviate the benefits of a hot labor market. Indeed, strong labor demand and, more generally, a strong economy can facilitate the kind of structural changes we describe here.