How can you kick-start decoupling emissions from economic growth in MENA?

By Martin Philipp Heger, Lukas VasholdThe burning of organic materials (such as fossil fuels, wood, and waste) for heating/cooling, electricity,..

The burning of organic materials (such as fossil fuels, wood, and waste) for heating/cooling, electricity, mobility, cooking, disposal, and the production of materials and goods (such as cement, metals, plastics, and food) leads to emissions. This affects local air quality and the climate. In a recent blog, we showed that the Middle East and North Africa region (MENA) lags behind all other regions in decoupling air pollutant emissions from economic growth.

Particulate matter with a diameter of less than 2.5 micrometers (PM2.5) is the air pollutant associated with the largest health effects. MENA’s cities are the second-most air-polluted following South Asia; virtually all of its population is exposed to levels deemed unsafe. In 2019, exposure to excessive PM2.5 levels was associated with almost 300,000 deaths in MENA and it caused the average resident to be sick for more than 70 days in his or her lifetime. It also carries large economic costs for the region, totaling more than $140 billion in 2013, around 2 percent of the region’s GDP.

A good understanding of the emission sources leading to air pollution is necessary to planning for how to best reduce them. Figure 1 shows that waste burning, road vehicles, and industrial processes accounted for around two-thirds of PM2.5 concentrations. Electricity production is also a significant contributor, most of which is used by manufacturing and households. 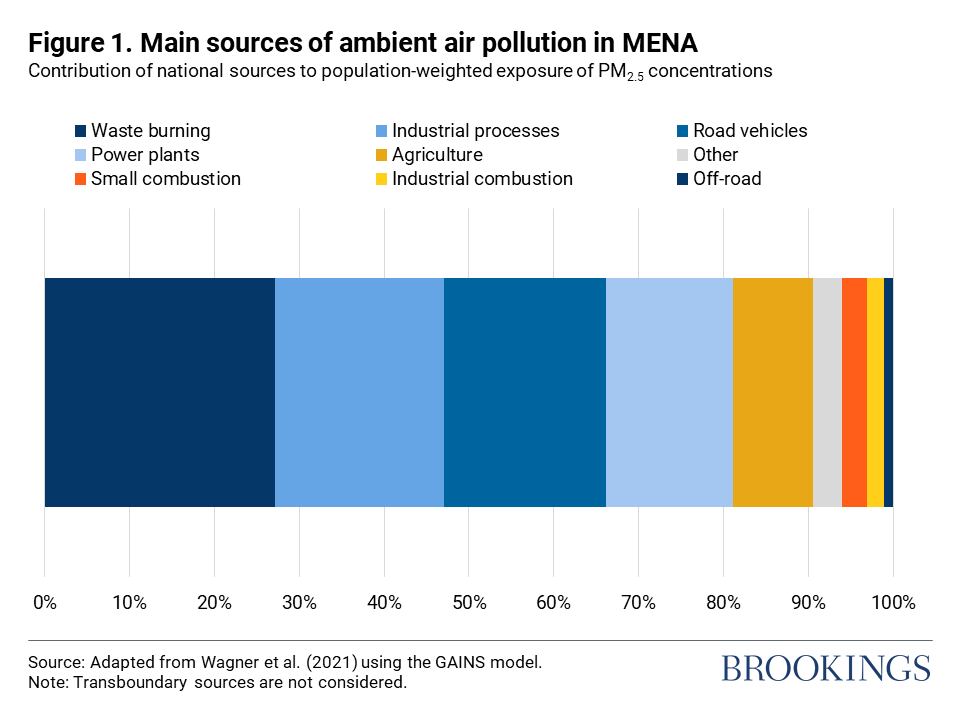 A forthcoming report titled “Blue Skies, Blue Seas” discusses these measures, alongside many others, in more detail.

1. Knowledge about air pollution and its sources is limited, with sparse ground monitoring stations. Detailed source apportionment studies have only been carried out for a few cities within the region, with results often not easily accessible for the public.

Extensive monitoring networks and regular studies on local sources of air and climate pollutants are foundational, as is making results easily accessible to the public (e.g., in form of a traffic light system as is done in Abu Dhabi). This will empower sensitive groups to take avoidance decisions, but also nurture the demand for abatement policies.

2. MENA’s prices for fossil fuels and energy (predominantly from burning fossil fuels), are the lowest in a global comparison. For example, pump prices in MENA for diesel ($0.69 per liter) and gasoline ($0.74 per liter) were about half the EU prices and less than two-thirds of the global average in 2018.

MENA’s heavy subsidization of fossil fuels, whether that is at the point of consumption or at the point of intermediary inputs in power generation and manufacturing, makes price reforms essential. Aside from incorporating negative externalities better, lifting subsidies also reduces pressure on fiscal budgets, with freed-up fiscal space being available to cushion the impact for low-income households. There have been encouraging steps by some countries such as Egypt, which reduced the fossil fuel subsidies gradually over the last couple of years, leading to significant increases in fuel prices, which in turn had positive effects on air quality.

3. Underdevelopment of public transport, low fuel quality, and low emissions standards drive high levels of emissions from the transport sector. In MENA, the modal share is often heavily skewed toward the use of private cars; when public transportation is available, it has a low utilization rate in international comparison.

To support a shift in the modal share toward cleaner mobility, it is imperative to invest in public transport systems, while making them cleaner and supporting nonmotorized options such as walking and biking. Cairo’s continued expansion of its metro system has been effective in reducing PM pollution and other MENA cities have also invested heavily in their public transport infrastructure, moving the needle on improving air quality. Furthermore, it is also important to raise environmental standards, both for fuel quality and car technology, together with regular mandatory inspections.

4. Lenient industrial emissions rules and their weak enforcement. The industrial sector is characterized by low energy efficiency standards, also due to the low, subsidized prices for energy mentioned above. MENA is currently the only region, where not a single country has introduced or is actively planning to introduce either a carbon tax or an emission trading scheme.

Mandating stricter emissions caps, or technology requirements, together with proper enforcement and monitoring is crucial. Incentivizing firms to adopt more resource-efficient, end-of-pipe cleaning, and fuel-switching technologies are additional crucial means to reduce air pollution stemming from the industrial sector. A trading system for emissions could either target CO2 emissions, or air pollutants, such as the PM cap-and-trade system recently introduced in Gujarat, India. Such a system should target both the manufacturing industry as well as the power sector.

5. Weak solid waste management (SWM) is a major issue in MENA. Although the collection of municipal waste has room for improvement in many countries, it is mainly the disposal stage of SWM where the leakage occurs. Too often waste ends up in open dumps or informal landfills, where it ignites. Furthermore, processing capabilities are often limited, and equipment outdated, at least for the lower- and middle-income countries of the region.

Hence, enhancing the efficiency of disposal sites is critical to reducing leakage and the risk of self-ignition. To start, replacing or upgrading open dumps and uncontrolled landfills with engineered or sanitary landfills is a viable option. Going forward, recycling capabilities should be improved and the circularity of resources enhanced. For agricultural waste, the establishment of markets for crop residues and comprehensive information campaigns in Egypt showed that such measures can supplement the introduction of stricter waste-burning bans.

Kick-starting decoupling and banking on green investments hold the promise for MENA not only to improve environmental quality and health locally, and to mitigate climate change globally, but also to reap higher economic returns (including jobs). Moreover, decoupling now will prepare MENA economies better for a future in which much of the world will have decarbonized its economies, including its trade networks.

By: Martin Philipp Heger, Lukas Vashold
Title: How to kick-start the decoupling of emissions from economic growth in MENA
Sourced From: www.brookings.edu/blog/future-development/2021/09/15/how-to-kick-start-the-decoupling-of-emissions-from-economic-growth-in-mena/
Published Date: Wed, 15 Sep 2021 18:36:50 +0000