Low-income and disabled patients covered by Medicaid and Medicare—so called “dual-eligibles’’— are significantly less likely to use primary care services than other Medicare beneficiaries, despite facing lower out-of-pocket costs and having generally poorer health. Marika Cabral of the University of Texas at Austin, Colleen Carey of Cornell, and Sarah Miller of the University of Michigan find evidence that this gap is not driven by lower demand for primary care but rather by lower supply, reflecting the fact that health care providers receive lower payments for treating dual-eligible patients. (Providers are not permitted to charge dual-eligible beneficiaries for Medicare’s cost-sharing but receive only a partial or no payment from state Medicaid programs to offset this loss.) Using Medicare and Medicaid administrative data from 2010 through 2014, the authors show that a mandated increase in Medicaid’s payments to providers increased annual primary care services for dual-eligible beneficiaries by 6.3%, nearly closing the gap in use of primary care services between dual-eligible patients and other Medicare beneficiaries. The effects are particularly large for beneficiaries who are young, white, or live in an area with numerous primary care providers. These findings are “direct evidence that providing unequal payments for identical services rendered to low-income versus high-income individuals leads to under-provision of services to low-income individuals,” the authors say.

Flows of foreign capital into the U.S. housing market are not measured in the U.S. balance of payments data but instead are subsumed into the statistical discrepancy. William Barcelona, Nathan Converse, and Anna Wong from the Federal Reserve Board of Governors show that unmeasured capital inflows categorized as statistical discrepancy move extremely closely with inflows of money from China into U.S. housing markets. They estimate that the value of Chinese holding of U.S. residential housing stock ranges from $170 to $344 billion, meaning that the measured net U.S. liability position with China could be understated by that much. Moreover, they find that house prices in areas heavily exposed to Chinese buyers have risen faster than similar areas with low exposure to Chinese capital inflows. This price gap tends to widen following periods of economic stress in China, suggesting that Chinese households view U.S. housing as a safe haven asset.

Studies in the 1990s found that rich countries tend to grow faster on average than poor countries, meaning that the income gap between rich and poor countries widens over time. Using data on per capita income by country from 1960 to 2015, Michael Kremer of the University of Chicago, Jack Willis of Columbia, and Yang You of the University of Hong Kong find that this trend has reversed—since the early 2000s, poor countries have grown faster than rich ones, or, in other words, incomes have been converging. The authors estimate that, on average, the disparities in GDP per capita across countries narrowed at an annual rate of 0.7% over the 2000-2015 period. This convergence reflects both slower growth in the richest countries and faster growth in the poorer ones. Examining the reasons for the shift from divergence to convergence, the authors find more convergence in the underlying determinants of growth—including human capital, government policy, and culture. They also find that some of these factors tended to become less predictive of growth over time. “Perhaps policies and institutions used to matter [for growth] when there were large differences across countries, but now that they have converged, any remaining differences matter less,” the authors suggest. The findings are descriptive rather than causal, they caution, and should not be extrapolated to future trends without further research.

Chart of the week: The cost to ship containers from Asia to the US has soared in recent months 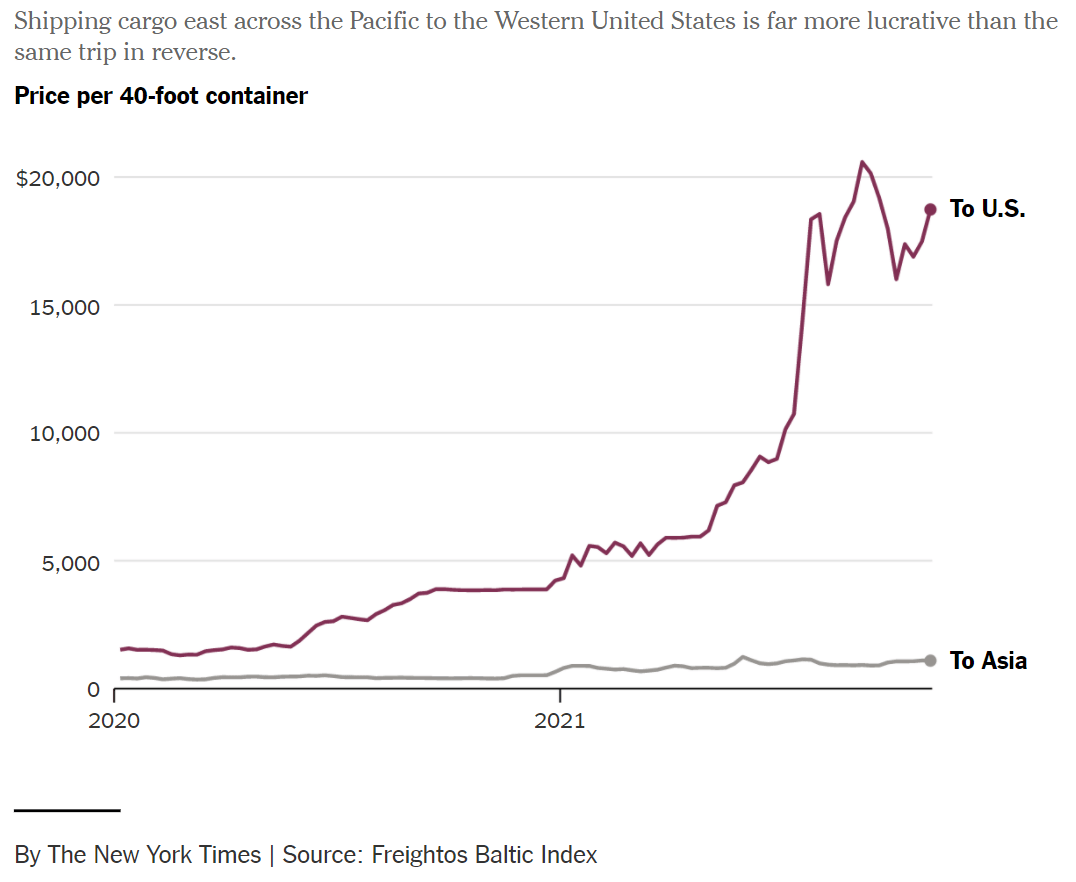 “[W]e still see inflation moderating in the next year, but it will take longer to decline than originally expected. If energy prices keep rising or supply constraints persist, inflation may remain higher for longer than we currently anticipate. This could feed into higher wages and subsequently higher prices. But so far, we see no evidence of this in the data for negotiated wages. We do see wage growth next year potentially rising somewhat more than this year, but the risk of second-round effects remains limited. Overall, we continue to foresee inflation in the medium term, remaining below our new symmetric 2% target,” says Christine Lagarde, President of the European Central Bank.

“Regarding policy interest rates, in our forward guidance we clearly articulated the three conditions that need to be satisfied before rates will start to rise. Despite the current inflation surge, the outlook for inflation over the medium term remains subdued, and thus these three conditions are very unlikely to be satisfied next year … At a time when purchasing power is already being squeezed by higher energy and fuel bills, an undue tightening of financing conditions is not desirable, and would represent an unwarranted headwind for the recovery.”