Disagreement among households about inflation grew during the pandemic

Growing disparities in households’ inflation expectations during the pandemic were driven by increased variation in both actual and perceived inflation rates, find Michael Weber of the University of Chicago, Yuriy Gorodnichenko of University of California, Berkeley, and Olivier Coibion of University of Texas, Austin. The authors find that actual inflation rose more during the pandemic for Black, low-income, and less-educated individuals, primarily because they spent more on goods that rose more in price. They also find that the pandemic increased variation across households in perceived inflation, which can differ from actual price changes when, for example, households focus only on the price changes of some of the goods they purchase. The authors show that the link between households’ perceptions of inflation and their expectations for future inflation is significantly stronger than the link between actual inflation and expected inflation. About half of the increase in disagreement across households about future inflation can be explained by variation in inflation perceptions. Furthermore, Weber and co-authors find that many households that anticipate higher future inflation also anticipate higher future unemployment, suggesting that differences in inflation expectations were partially driven by differing views about the severity of the COVID shock.

Foreign investors hold about 35% of outstanding U.S. Treasuries and were large contributors to the immense Treasury selloff in March 2020, leading to speculation that Treasuries have lost their status as a safe haven for global investors. Examining flows of foreign holdings since March 2020, Colin Weiss of the Federal Reserve Board finds little evidence of a persistent change in the pattern of foreign demand for U.S. Treasuries. He also finds that foreign investor sales of Treasuries during periods of financial stress are common. The March selloff was driven primarily by Middle East oil exporters (which faced high oil prices leading up to the Global Financial Crisis (GFC) but an oil price collapse in spring 2020) and east Asian emerging market economies (which had substantially less global market exposure during the GFC than the COVID-19 pandemic). This suggests that the circumstances of the moment rather than a shift in global confidence in Treasuries were key factors in the recent period.  Moreover, Treasury purchases resumed prior trends in the second half of 2020 and in 2021, and the U.S. dollar share of foreign exchange reserves has remained stable since June 2020, implying that Treasuries have maintained their status as a much-desired security.

Employers in each state pay an unemployment insurance (UI) tax which is used to finance state UI programs. California imposes the tax on the first $7,000 of wages paid annually to each worker, the federally mandated minimum. Washington state imposes the tax on the first $57,200 of wages. Other states have tax bases between those extremes. Using data from the Current Population Survey and exploiting the variation in the UI taxable wage base across states and over 37 years, Mark Duggan of Stanford, Audrey Guo of Santa Clara University, and Andrew C. Johnston of the University of California, Merced, find that a larger UI tax base is associated with an increase in part-time work among low-wage workers, driven by an increase in the availability of part-time positions rather than a reduction in full-time work. This is likely because a smaller UI tax base necessitates higher tax rates to finance UI benefits and that makes hiring low-wage workers more expensive, the authors suggest. Noting that variation in the UI tax base across states continues to grow, the authors conclude, “it seems likely that a significant increase in the federal UI tax base of $7,000 is warranted, since this has been unchanged in 39 years.” 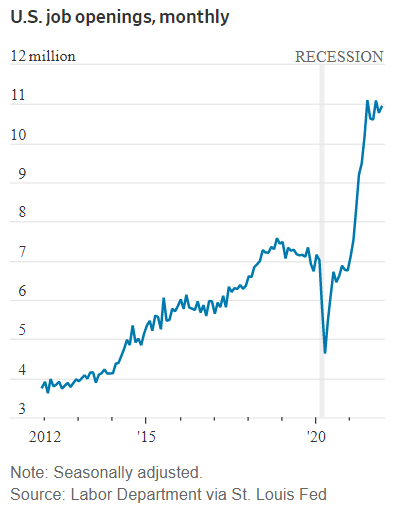 “[I]t will be important to consider the interaction between reductions in the size of the balance sheet and increases in the policy rate. What we do on the balance sheet will likely affect the path of policy rates and vice versa. For example, more aggressive action on the balance sheet could allow for a shallower path for the policy rate. Alternatively, combining a relatively steep path of rate increases with relatively modest reductions in the balance sheet could flatten the yield curve and distort incentives for private sector intermediation, especially for community banks, or risk greater economic and financial fragility by prompting reach-for-yield behavior from long-duration investors,” says Esther George, President of the Federal Reserve Bank of Kansas City.