Hutchins Roundup - Racial disparities and the Phillips Curve and more

The Phillips Curve is nonlinear when inflation levels are low

The Phillips Curve – the sensitivity of inflation to labor market slack – has become flatter in recent years as changes in the unemployment rate have had a smaller impact on price levels than in the past. Kristin Forbes at MIT, Christopher Collins at Morgan Stanley, and Joseph Gagnon at the Peterson Institute suggest that this is because the Phillips Curve relationship is nonlinear during periods of low inflation. Using cross-sectional data on advanced countries, the authors find that, when inflation runs below 3% and economic output is below potential, the negative relationship between inflation and labor market slack becomes almost non-existent. As such, inflation can persist even when spare capacity increases, likely because firms and workers tend to resist cuts to wages and prices. In contrast, the Phillips Curve relationship is steep during periods of high inflation or when the economy is running above capacity, the authors find. “In countries where inflation has picked up to above 3%, it is possible that reductions in slack may begin to have more impact on inflation than in the past, even before output gaps close,” the authors conclude.

Following the onset of the COVID-19 crisis in the second quarter of 2020, Germany suffered an output contraction greater than the U.S., but employment fell by only 1.4% in Germany versus more than 13% in the U.S. Shekhar Aiyar and Mai Chi Dao from the IMF investigate the stabilizing role of Germany’s Kurzabeit (KA), a job retention program which provides a government subsidy to employees working reduced hours; workers earn regular wages for hours worked, and a reduced wage for hours not worked. Using state-level variation in exposure to the pandemic and KA take-up, the authors find that in the second quarter of 2020 unemployment would have been 2.9 percentage points higher without the program. Given that the unemployment rate was 6.2%, this implies KA cut unemployment by about a third on average. Moreover, they estimate that the contraction in retail trade would have been 15% greater in the second quarter of 2020 absent the program.

Chart of the week: After declining in mid-September, air travel has picked up in recent weeks 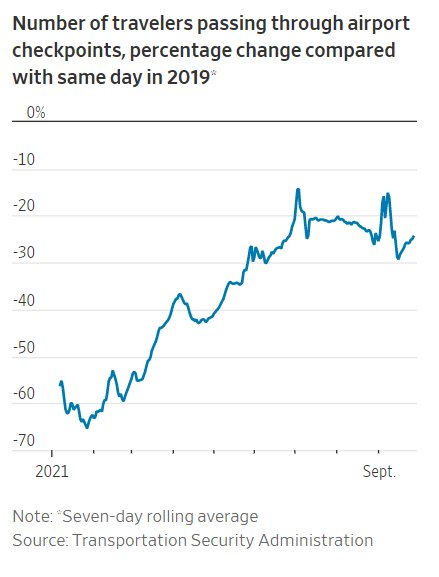 “[W]e need to take a new, holistic, and pragmatic approach in our relationship with China that can actually further our strategic and economic objectives for the near term and the long term. As our economic relationship with China evolves, so too must our tactics to defend our interests. As the years go by, the stakes keep getting higher, and boosting American competitiveness becomes all the more important. Our strategy must address these concerns while also being flexible and agile to confront future challenges from China that may arise,” says Katherine Tai, U.S. Trade Representative.

“Our objective is not to inflame trade tensions with China. Durable coexistence requires accountability and respect for the enormous consequences of our actions. I am committed to working through the many challenges ahead in this bilateral process in order to deliver meaningful results. But above all else, we must defend to the hilt our economic interests. And that means taking all steps necessary to protect ourselves against the waves of damage inflicted over the years through unfair competition. We need to be prepared to deploy all tools and explore the development of new ones, including through collaboration with other economies and countries.”