Using data from the Consumer Expenditure Survey on the variation in amount, receipt, and timing of receipt of stimulus checks authorized by the CARES Act, Jonathan A. Parker from M.I.T. and co-authors find that people spent less of their checks than estimated by previous studies using other data sources and than in previous episodes. They estimate that people spent 10% of their stimulus checks on non-durable goods and services three months after receiving them with little evidence of additional spending in the subsequent three months or on durable goods. However, they find significant variation in spending across households: those in the bottom third of the distribution of liquid wealth – households with less than $3,000 in liquid wealth – spent 20% to 30% of their stimulus checks three months after their receipt. Moreover, households that self-reported mostly using their checks for expenses spent 14.3% of their stimulus checks. The authors conclude that compared to other periods of economic distress, “the pandemic limited the types of goods and services that one could spend on and many households reduced spending.”

David Autor of MIT and co-authors estimate that Paycheck Protection Program (PPP) loans issued in 2020 saved about 3 million job-years of employment after the start of the pandemic, at an average cost of $169,000 per job-year.  At most a third of this spending went to workers who would have otherwise lost their jobs; 66% to 77% of the money instead accrued in the form of windfalls to business owners and shareholders who would have been able to maintain employment in the absence of PPP. As a consequence, about three-quarters of PPP benefits went to households in the top fifth of the income distribution, in contrast to the more equally distributed benefits of the stimulus checks and expanded unemployment insurance. Autor and co-authors argue that the PPP’s lack of targeting towards struggling businesses was necessary to distribute funds rapidly given the lack of administrative infrastructure for determining need. “A key takeaway from the PPP experience is that building U.S. administrative capacity prior to the next pandemic or other largescale economic emergency would enable greatly improved targeting of either employment subsidies or business liquidity when the need arises again.”

Kairon Shayne Garcia and Benjamin Cowan of Washington State University find that pandemic-induced school closures had little impact on whether parents of young children worked at all but did reduce the number of hours they worked. Using data from the Current Population Survey and county-level data on school closures, the authors find that, when schools were closed, the mothers and fathers worked 1.5 to 2 fewer hours each week and were less likely to work full-time than those without school-age children. The reductions in hours were similar for men and women but were much more pronounced for parents without a college degree. Individuals with less education (who tend to work in-person jobs and have lower pay) may have been less able to switch to remote work or arrange alternative child care arrangements, the authors suggest. While the additional child care burden caused by the pandemic did not appear to drive parents to exit the labor market, it disproportionately impacted vulnerable populations and exacerbated inequalities, the authors conclude.

Chart of the week: Retail sales dropped 1.9% in December 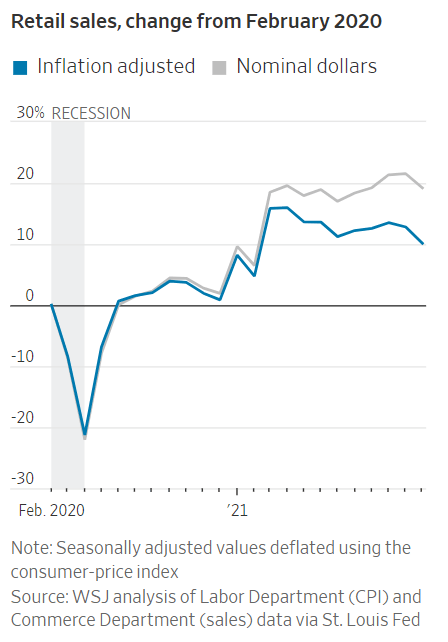 “Stablecoins are cryptocurrencies that base their value on collateral, often in the form of deposits with commercial banks or other regulated financial instruments. They thus piggyback on the credibility of sovereign currencies. Stablecoins are issued in this first scenario by big techs, or large companies whose primary activity is digital services…But stablecoins may not be sound money. One drawback is the fact that they have to tie their value to regulated assets to borrow their credibility. Their issuers have an inherent incentive to invest reserve assets in a risky manner to earn a return. Without appropriate regulation, issuers can diverge from full backing, or test the margins of what counts as a safe asset – as experience has repeatedly shown. More fundamentally, decentralisation comes at a cost. Trust in an anonymous system is maintained by self-interested validators who ensure the integrity of the ledger in the absence of a central authority,” says Agustín Carstens, General Manager of the Bank of International Settlements.

“Trust in money remains the bedrock of stability…At the core of this system are central banks. They do not aim for profits, but to serve society. They have no commercial interest in personal data. They act as operators, overseers and catalysts in payments markets, and regulate and supervise private providers in the public interest. Working together, they can provide central bank digital currencies (CBDCs). Unlike stablecoins, CBDCs do not need to borrow their credibility. As they are directly issued by the central bank, they inherit the trust that the public already places in their currency. They can thus serve as a sound foundation for future innovation… [C]entral banks and public authorities are still the glue that holds the monetary and financial system together. Private sector services and innovation are essential and should thrive on this foundation. But trust can never be outsourced nor automated.”