Relaxing land-use regulations can increase the supply of affordable housing—but which forms of regulation have the greatest impact? By comparing housing prices and supply on either side of zoning boundaries in the Greater Boston area, Nick Chiumenti of the Boston Fed, Amrita Kulka of the University of Warwick and Aradhya Sood of the University of Toronto find that increasing density by reducing the minimum lot size and allowing more dwelling units per lot has the greatest effect on supply and pricing (either alone or in combination with other policies), increasing the supply of multi-family units by up to two thirds and lowering rents and prices by up to 6% and 7%, respectively. Less effective changes include multi-family zoning (which allows for multi-family housing but does not address density restrictions), relaxed building height limits, and inclusionary zoning policies that allow affordable housing developers to override certain zoning bylaws or community opposition, none of which significantly increase housing supply or lower costs when implemented on their own. The authors also find that when density increases by 1%, single-family house prices fall by 0.16-0.21% — suggesting that policies intended to help first-time home buyers and low-income renters are likely to face strong political opposition from current homeowners. Consequently, the authors show, easing land-use restrictions has a smaller effect on density and pricing under local governance structures in which current residents have greater representation.

The Federal Reserve tends to forecast the state of the economy more accurately than private forecasters. Amy Guisinger of Lafayette College and Michael McCracken and Michael Owyang of the Federal Reserve Bank of St. Louis find that 20-30% of the Fed’s forecasting advantage is derived from its greater ability to predict future monetary policy. Comparing Fed and market projected and realized inflation, the authors find that when the market matches the Fed’s expectations of future monetary policy, it predicts inflation over that period as accurately as the Fed. The results suggest that the Fed’s forecasting tools or resources do not significantly outperform those of private forecasters. Increased forward guidance has reduced the knowledge gap about monetary policy, causing the Fed to lose much of its forecasting advantage over private forecasters, they find.

Economic downturns decrease the opportunity cost of going to school, usually leading to an increase in higher education enrollment. The COVID-19 pandemic was an exception. Community college enrollment fell 9.5% between the fall of 2019 and fall of 2020; it fell 15% among men, about twice as much as women. Diane Whitmore Schanzenbach of Northwestern and Sarah Turner of the University of Virginia use data on community college enrollment by course in seven states (representing about half of all community college students) and find that 20% of the overall decline in community college enrollment was attributable to courses requiring hands-on training, such as welding, HVAC and auto repair, that could not easily be shifted online. These subjects are typically male-dominated and explain 90% of the difference between the enrollment decline for men and women. The authors speculate that the proven effectiveness and cost-savings of shifting other programs to a hybrid model may induce community colleges to adopt simulation technologies for hands-on programs.

Chart of the week: State and local employment remains significantly below pre-pandemic levels 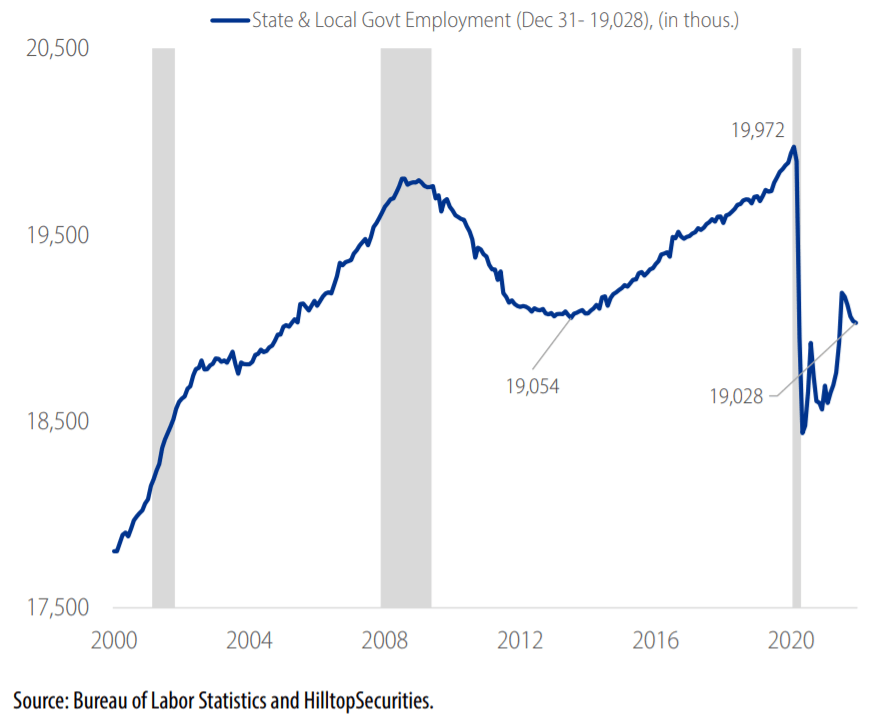 “[W]hen we make that first rate move — whenever it is — that’s not really policy tightening. Accommodation is still going to be really high at that point. So, I think that the case is really strong to begin to wind back some of that accommodation… I can tell you in that December SEP [Summary of Economic Projections] submission I had three penciled in for this year…I also want to point out that we’re going have to see how the economy does overtime before we can say for sure how many rate increases are needed,” says Loretta Mester, President of the Federal Reserve Bank of Cleveland.

“There’s still a lot of uncertainty regarding the outlook. There’s uncertainty about how the pandemic plays out. As we’ve seen each variant, the economy has really navigated it in terms of the economic outlook but right now we have to say that we probably need to recalibrate our policy stance because inflation is well above where we need it to be. The labor markets are tight from the standpoint of a policy-relevant framework. Do I think we’ll see labor force participation move up somewhat after we get beyond the pandemic? Of course, but I don’t think we can ignore the shorter run or medium run tightness in that labor market. So, I think we’re in a good place to move policy and we’ll have to see how that affects the economy going forward and the other factors affecting economic growth and employment going forward.”