By Max WalterIndustrial policy is seeing a revival in Africa and beyond. In fact, governments across the continent are now explicitly using a variety ..

Industrial policy is seeing a revival in Africa and beyond. In fact, governments across the continent are now explicitly using a variety of industrial policy tools to promote industrialization through agro-processing, labor-intensive light manufacturing, natural resource extraction and value addition, some knowledge-intensive manufacturing, and “industries without smokestacks” such as high-value agriculture and tradable services.

This revival is driven by three main trends:

Across the continent, countries are utilizing industrial policy tools. For example, Uganda’s third National Development Plan, adopted in 2020, includes the key objective “strengthen the role of the state in guiding and facilitating development.” Ghana and Côte d’Ivoire, which together produce 65 percent of the world’s cocoa, are working together to implement industrial policy packages—including price controls, production caps, and public investments—toward upgrading their part in the global cocoa value chain. Senegal, Ethiopia, Nigeria, Gabon, and others are embracing agro-industrial parks to facilitate farm output aggregation and foster the growth of agro-processing clusters. Ethiopia’s light manufacturing industrial parks seek to leverage the country’s low labor costs to catalyze an industrial takeoff. New or revived public investment vehicles have begun to scale up concessional debt and equity to industrial pioneer firms across the continent, with at least 23 new national development banks created since 2010. Middle-income countries such as Morocco and South Africa have embraced industrial policies to upgrade their car manufacturing sectors into internationally competitive, technology-intensive, and high-value-added activities.

Why does industrial policy have so many detractors? Why are they wrong?

Industrial policy is seen to fail more often than it succeeds. This is partly a misdiagnosis: In fact, failure is a necessary—and useful—part of the industrialization journey, which is impossible without experimentation and learning by doing. Whenever a government invests in a pioneering industrial venture, constructs an industrial park, disburses research and development grants, temporarily protects an infant industry from external competition, or trains specialized industrial engineers, it is essentially carrying the high risk involved in trying to break into higher-value-added economic activities. Out of 10 state-supported pioneer firms, perhaps seven will fail to achieve international competitiveness. This failure rate masks success on a larger level, though: With every failure, the market has learned valuable lessons on what works and what doesn’t, managers have obtained key skills and networks, firms have learned how to organize industrial production and distribution, and so on. Moreover, the minority of successful pioneer firms can spawn entire new industrial ecosystems through backward, forward, and horizontal linkages and positive externalities. In other words, failure is a necessary—and useful—part of the industrialization journey.

Nevertheless, industrial policy often fails even to facilitate this learning by doing: That is because it is uniquely difficult to do well. In 2010, Dani Rodrik outlined three conditions for its success: (i) a government that is “embedded in the private sector, but not in bed with it”; (ii) incentives that are temporary and based on performance; and (iii) transparent and accountable implementation. These conditions are—politically, managerially, and technically—extremely difficult to realize anywhere, let alone in a low-income country.

So, what are the major factors that drive the success or failure of industrial policy?

In a recent study for the Centre for Development Alternatives, we distilled the growing global evidence into four major factors that have driven industrial policy success or failure around the world. We then applied this framework to Uganda as a demonstrative case. 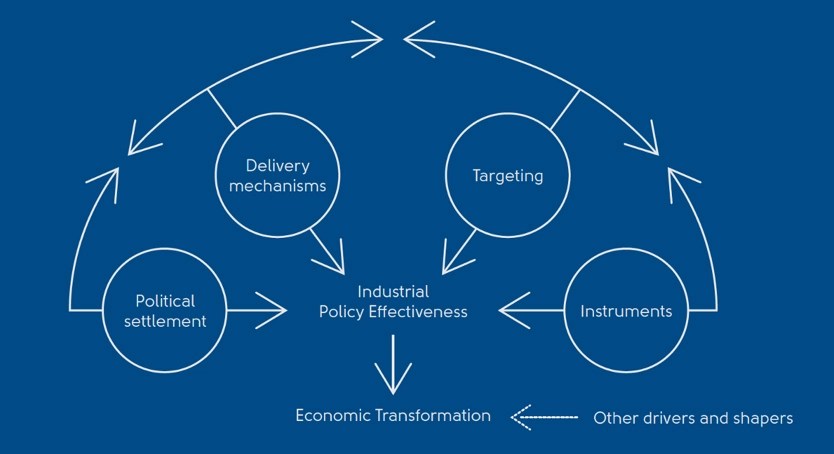 The first and most profound of these factors is the political settlement—the balance of power within and beyond a country’s ruling coalition. Industrial policy has the best chance of success when cohesive coalitions and conducive power dynamics exist between the political elite, the state bureaucracy, and private capital. As elegantly captured in Whitfield et al (2015), industrial policy can succeed if there exist some mutual interests (in industrialization) between parts of the private sector and the political elite, pockets of efficiency in the state bureaucracy, and industrial policymakers who are “embedded in but not in bed with” industry. In the absence of these conditions, industrial policy can easily become an extractive tool for patronage politics that stifles economic progress, thus doing more harm than good. 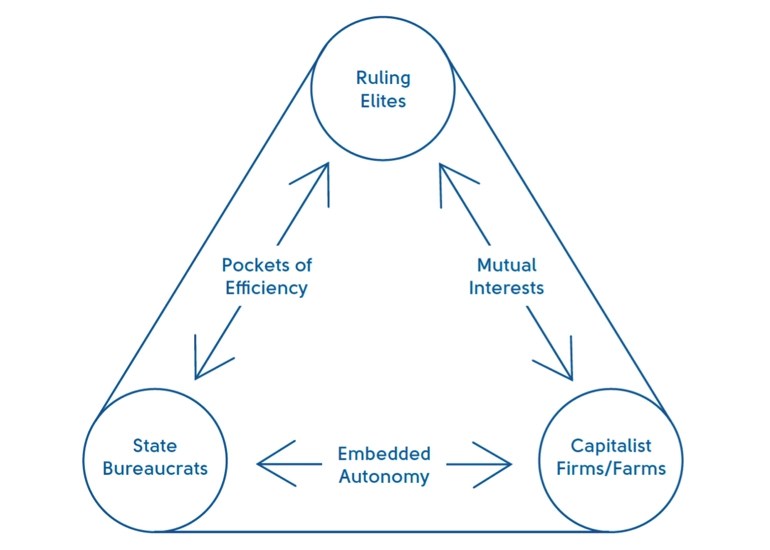 The second—and often glossed over—distinguishing factor between cases of industrial policy success and failure is the ability to implement it. Inducing and supporting industrial upgrading requires numerous government functions to work in concert: public works (to build roads and industrial parks), energy (to provide reliable electricity), trade policy (to manage the import tariff regime), investment promotion (to attract, select, facilitate, and monitor industrial investments), education (to train industrial managers and front-line workers), finance (to manage public investment vehicles), and so on. Such requirements not only present an immense cross-government coordination challenge, but also demand that the relevant government bodies overcome powerful vested interests in the public and private sectors. Though this task is difficult, it has often been achieved through a powerful specialized agency (such as Taiwan’s Industrial Development Bureau or Malaysia’s PEMANDU) reporting directly to the head of state, or a specially empowered “superministry” (such as Japan’s Ministry of International Trade and Investment) that is technically and financially empowered as well as politically insulated from vested interests. At the same time, a high-level council, committee, or board often builds broad-based consensus around the industrial policy agenda. In Africa, potential emerging examples include Rwanda Development Board, Kenya’s President’s Delivery Unit, and the Bureau Opérationnel de Suivi du Plan Senegal Emergent, among others.

Third, industrial policy outcomes are driven by the choice of economic sectors, actors, and activities to promote. Successful industrializers have tended to concentrate scarce resources on a narrow set of target industrial sectors or activities. Industrial policy targeting generally involves the analysis of a potential sector/activity’s attractiveness (the potential gain in employment, foreign exchange earnings, industrial spillovers, etc.) and feasibility (the likelihood of the country’s firms achieving international competitiveness in the activity—in the shorter or longer term)—as discussed here by UNIDO. The state does not need to pick all the winners: Effective incentive schemes and public-private dialogue mechanisms can foster the ”self-discovery” of industrial opportunities. Finally, political economy considerations should not be left out of the exercise: Instead, technocrats can propose the selection of a set of priority sectors or activities that make economic sense and where the political settlement is likely to support effective industrial policy implementation.

Fourth, industrial policy outcomes are shaped by the choice of the policy instrument mix, and how well the policy package is adapted based on success, failure, and changing contextual factors. Countries with successful economic transformation outcomes have deployed a rich “toolbox” of industrial policy instruments to shift the incentives and capabilities of economic actors toward higher-value-added activities. UNIDO and GIZ’s EQuIP project provides a detailed list of examples. Crucial to the success of these instruments is the combination of supporting and disciplining domestic and international investors (as argued by Alice Amsden and Joe Studwell) in a way that compels them to shift resources away from short-term rent seeking and toward continuous investment in new productive capabilities.

For African governments the question is not whether to pursue industrial policy: It is, and has for a while now been, how to maximize its chances of driving inclusive and sustainable economic transformation.

The East Asian industrialization miracle was not built on ideal political and state capacity conditions—far from it. It was built by political leaders creating, protecting, and leveraging pockets of effectiveness and prioritizing rapid economic transformation over other goals. Across the African continent, the right conditions for effective industrial policy exist in pockets, however small and fragile these may be. Policy and international support should focus on identifying those pockets, bolstering them, and leveraging their success to create self-perpetuating economic transformation momentum. As competitive industries (with and without smokestacks) grow, they foster increased state revenues, technical capabilities (both public and private), and a growing constituency of actors pushing for broader state effectiveness. Industrial policy has been—at best—a scruffy, contested, perpetual battle to turn the vicious cycle of underdevelopment into a virtuous one of economic transformation. But without the battle, not much will change at all.