Is foreign aid meant to engage or bypass partner countries?

By George IngramDonors differ on engaging partner governmentsIn “States, Markets, and Foreign Aid,”  Simone Dietrich identifies and explains why and..

In “States, Markets, and Foreign Aid,”  Simone Dietrich identifies and explains why and when some government donors chose to bypass partner governments while other donors remain engaged with partner government agencies even under trying circumstances:

“Three theoretical and empirically informed observations about aid decision-making: (1) that aid officials, as key decision-makers, seek to minimise risk in aid delivery, that (2) their response to risk is conditional on the rules and practices that make up the national aid organisations in which they operate, and (3) that these rules and practices have ideological origins that inform us about the substance of aid delivery.”

Why do donors differ in the extent to which they channel assistance through government institutions (“engagement”) versus through entities other than the partner government (“bypass”)? Her premise is that it’s not due to the objective analysis of recipient country needs and the best means to address them, but due to overarching governing ideology of donor government institutions. Engagement donors adhere to what she calls a traditional approach to the public sector, driven by a more statist concept of governance, while bypass donors follow a neoliberal priority on the dynamics of competition and outsourcing. This approach of looking at whether donors chose to engage or bypass partner governments leads to useful observations of how foreign assistance is delivered and the resulting ramifications.

Dietrich goes into considerable detail explaining how the U.S., U.K, and Sweden fit the neoliberal camp and France and Germany the engagement camp. The figure below reveals that the United States, typically thought of as the donor most inclined to bypass partner government, is surpassed in that approach by a number of countries, led by Finland, Canada, and Norway, with nearly 70 percent of their assistance bypassing government, followed by Ireland, Sweden, Netherlands, Switzerland, Spain, Belgium, Denmark, and the U.K. In 2015, 40 percent of donor assistance went through bypass mechanisms, identified by Dietrich as including international organizations, NGOs, and private development firms. 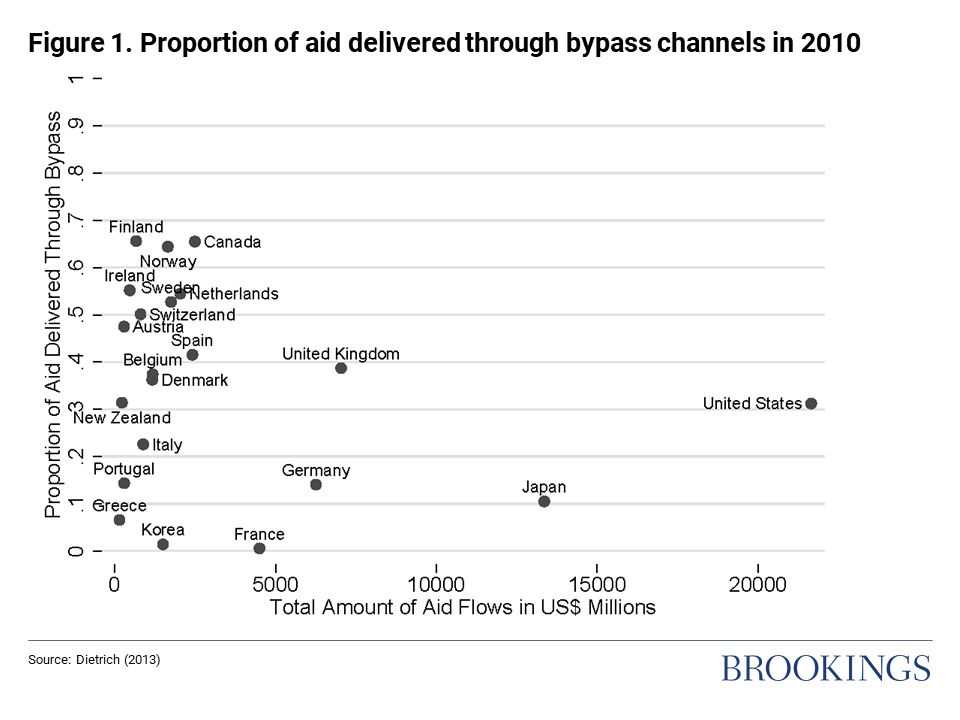 In Table 1, I use data from the OECD Credit Reporting System (CRS) to compare how the U.S. distributes its official development assistance in comparison to other donors—58 percent of all donor assistance goes directly to public sector entities while only 30 percent of U.S. assistance travels through that channel. 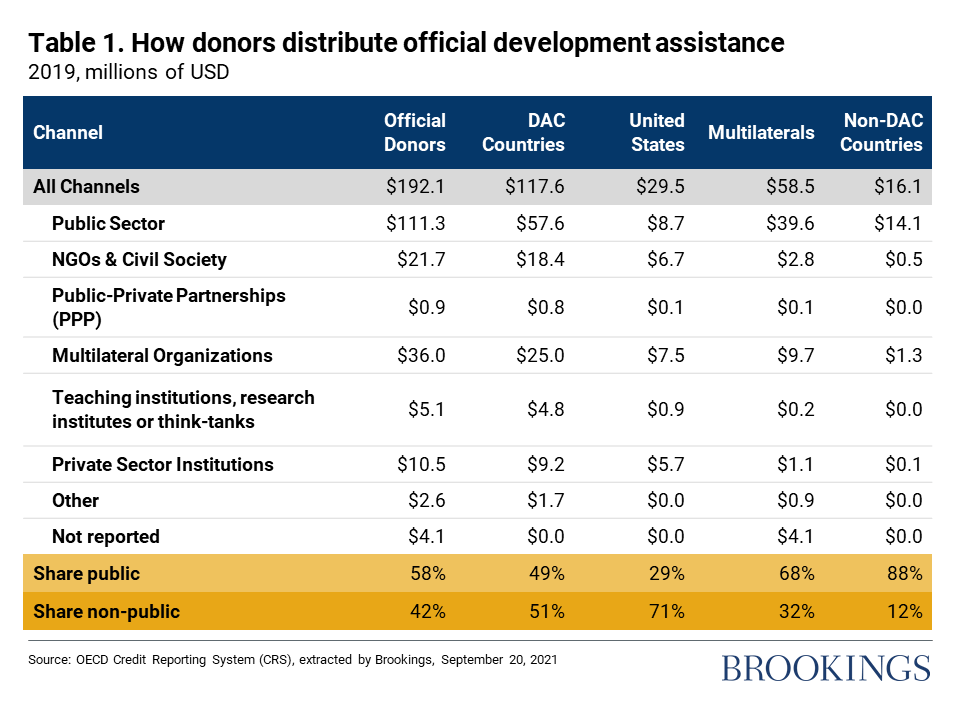 The second set of observations involves the focus of aid officials on risk and outcomes and the tension between prioritizing concrete results versus recipient government capacity building. The concern over risk leads donors to be alert to aid capture stemming from ineffective or corrupt government institutions. Dietrich emphasizes that “aid success means different things to aid officials from different political economies” (her italics). The differing approach to outcomes leads the neoliberal mindset to prioritize achieving concrete and measurable results, and the traditional public sector approach to prioritize recipient government capacity building. The result is that, while both types of donors provide assistance to good performing government, confronted with a poor performing, fragile governing environment, the traditional public sector minded donor seeks to maintain engagement with the recipient government by adopting measures to ensure the integrity of the assistance while the neoliberal approach is to bypass the government in order to maximize identifiable results.

Further, as the basis of the neoliberal approach derives from achieving concrete results, it prioritizes tracking and accounting for those results. While acknowledging the benefits of performance monitoring and accountability, she says that “officials face relentless pressure to report on and measure the success of aid projects” and references Jerry Muller on the “tyranny of metrics.” She reports that the number of performance indicators used by the U.S. Agency for International Development (USAID) reached 1,100 in 2010. (In fact, that number subsequently has been pared back to a level that today USAID and the Department of State utilize 237 Standard Foreign Assistance Indicators, plus an unknown number of mission-determined Custom Indicators (the 1,100 number presumably includes both types of indicators). She notes that a development activity may achieve all its targets and performance monitoring may provide information valued by aid donors and their stakeholders (parliament, taxpayers, auditors), but that information may reveal little as to whether the activity actually contributed to recipient country development.

Dietrich provides an informative synopsis of how performance monitoring and evaluation evolved in neoliberal donors, especially the United States but also the U.K. and Sweden, that serves as a useful briefer on this history.

The development arena is replete with commitments to donor coordination, often endorsed at the highest level such as in the Paris Declaration, that are mostly honored in the breach. Dietrich correctly points out that donors pursuing differing approaches of engagement and bypass is a significant barrier to donor coordination. I would add that the complex maze of donor priorities, procurement processes, and reporting requirements are further complications to donor coordination.

So, what are the lessons and implications that U.S. policymakers and practitioners should glean from Dietrich’s analysis of how donors deliver assistance?

Health. With the world disrupted by the coronavirus pandemic, a 21st century plague that even the most advanced countries were unprepared to address, leaders are confronted with the urgent need to address long-term global health security, as highlighted in the U.S.-sponsored COVID Summit at the U.N. on September 22. The U.S. places the vast majority of its health assistance in vertical health initiatives—PEPFAR addressing HIV/AIDs and PMI addressing malaria– that have been highly successful in saving millions of lives. Should the U.S. transition more of its health funding to building up comprehensive public health systems, or is there a formula for donors to ensure that more of the funding that addresses specific diseases contributes to building those systems so they will be better prepared to handle the next unknown health challenge? Along these lines, on November 4, USAID administrator Samantha Power signaled that the U.S. “will use this global COVID-19 vaccine push to strengthen health systems in partner countries.”

Accountability. I put myself in the camp of those emphasizing the importance of holding donors accountable for achieving development results, but there is something to the charge of the “tyranny of metrics.” Especially in fragile and conflict environments, who knows what will happen next year, next month, or even next week. How do you have three-year, even one-year, plans and metrics in an environment of constantly changing politics and socioeconomic dynamics? If the Biden administration is to effectively implement the Global Fragility Act, it must assign those in the field charged with administering the assistance a degree of freedom from Washington-driven directives and precooked performance benchmarks and reporting.

Donor coordination. Donors need to acknowledge the barriers to coordination and find workarounds: (1) pooling of funding through an in-country platform or a third party such as the World Bank; (2) if differing objectives or bureaucratic processes prevent joint programming, at least agreeing on common principles and objectives to guide assistance in a particular arena; (3) investing in an independent entity, as USAID and the U.K.’s Department for International Development (DFID) did in the establishment of the Development Innovation Fund; (4) and/or establishing an implicit or explicit accord that certain donors will work directly with government and others through civil society and the private sector but under a common strategy or set of objectives so the collective efforts work toward common goals.

No doubt the Taliban takeover of Afghanistan and the billions of economic assistance the U.S. invested will lead to multiple assessments of lessons and how the U.S. can best assist the government and people in a fragile environment. Dietrich offers a deep analysis of how and why donors engage or bypass government that provide a useful lens for that assessment.