Nuclear energy has captured public interest for decades. From nuclear war to power plant meltdowns, nuclear power generation has been made out to be..

From nuclear war to power plant meltdowns, nuclear power generation has been made out to be a mysterious and dangerous technology.

However, in recent years, public reaction to nuclear power have started to change.

Nuclear energy has entered the sustainable spotlight, and fear from the past is being replaced with facts for the future.

Instead of being harmful and hazardous, nuclear energy is slowly being recognized for its potential to help the environment and provide electricity to the world.

Here’s what you need to know about the power of nuclear energy.

What Is Nuclear Energy and How Does it Work?

Nuclear energy makes a significant impact, but its tremendous energy potential comes from a tiny source. That’s because nuclear energy starts with atoms, the minuscule elements that make up the world around us.

Atoms are made of spherical electric cases that rotate around the center of the atom. These cases consist of an inner layer that holds two electrons and several outer layers that contain up to eight or more electrons. As the electrons move, they are kept in their casings by an electrical force.

Inside the circles of electrons is the nucleus, which is made of protons and neutrons . The protons contain a positive electric charge and attract the spinning electrons, which carry a negative charge.

The bonds that hold the particles of the nucleus together contain large amounts of energy. These powerful bonds can be broken through an atom-splitting process called nuclear fission. When this happens, nuclear energy is released and can be used to generate electricity.

According to the United States Energy Information Administration (EIA), nuclear power plants utilize nuclear fission to produce nuclear power, and a majority will use uranium atoms in the process.

Nuclear energy can also be produced when atoms fuse — a process known as nuclear fusion — and a larger atom is created.

Uranium intended for nuclear fission is also known as nuclear fuel or enriched uranium. The most commonly used type of uranium is U-235, an isotope whose atoms are easier to split inside of a nuclear reactor.

When nuclear fission takes place with a uranium atom, a neutron strikes and splits the atom, releasing more neutrons, heat, and radiation energy.

Neutrons continued to be released and collide with more uranium atoms, creating an nuclear chain reaction.

Power plants can control this chain reaction until the process has produced the needed amount of energy.

How Do Nuclear Energy Reactors Work?

Nuclear reactors are the machines responsible for controlling nuclear fission and nuclear chain reactions in nuclear power plants. Inside of these reactors is where these processes take place.

One method of sustaining an energy-generating fission chain reaction is by using uranium fuel as nuclear fuel. The uranium is compressed into one-inch-long ceramic pellets, which are then stored in fuel rods. An individual enriched uranium pellet can produce approximately the same amount of electricity generated by one ton of coal. These rods are then assigned to a fuel assembly, a group of 200 fuel rods or more.

A typical nuclear reactor design allows for the containment of hundreds of fuel assemblies. Inside a compartment of the reactor called a reactor vessel, the fuel rods are submerged in cooling, moderating water.

The water serves as a moderator and tempers the repeated neutron production that results from fission, while control rods are inserted and removed to reduce or increase reaction rates. Meanwhile, heat from fission transforms the water into the steam needed to operate a turbine.

What Is Nuclear Energy Used For?

Nuclear power generates heat, which is used to create steam. This nuclear-produced steam is then used to power a turbine which generates electricity as it rotates.

Nuclear heat and steam power are used to make electricity.

The U.S. has used nuclear power for over six decades. It is responsible for more than 30% of global nuclear electricity generation.

Is Nuclear Energy Clean and Sustainable? 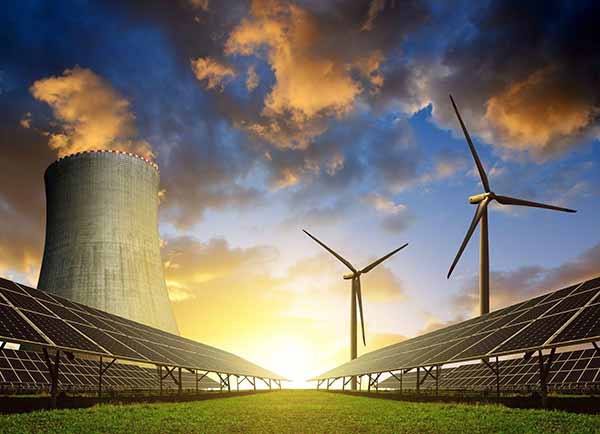 Nuclear energy has been praised for producing low-carbon energy and has even been considered a producer of carbon-free energy.

Nuclear energy is  the second biggest global source of low-carbon electricity after hydropower.

Nuclear energy is a runner-up to solar and wind power when accounting for carbon dioxide emissions and surpasses other forms of energy when calculating harm to the environment and pollution output.

In 2020, nuclear energy production U.S. avoided over 471.3 million metric tons of carbon emissions from being produced when compared to fossil fuel energy generation. Nuclear power is also the number one electric power source that does not emit greenhouse gas (GHG) emissions when generating power, accounting for over 70% of GHG-free energy.

Not only does nuclear energy produce less pollution while being less harmful to the environment, but it doesn’t create the toxic chemicals sulfur dioxide or nitrogen oxide that are found in acid rain. In other words, by removing pollutants that are responsible for acid rain, nuclear energy helps keep the air clean.

Nuclear energy may be a zero-emission source of clean energy, but is it considered a renewable energy source?

Nuclear energy production does not qualify for renewable energy standards because of the material used in nuclear power plants.

The specific uranium needed to induce nuclear fission, U-235, is a non-renewable resource. Thus, one day this rare element will be challenging to find.

Is Nuclear Energy Good for the Environment?

Nuclear energy is clean, sustainable, and somewhat renewable. It’s also carbon neutral. However, the construction of nuclear power plants and mining for uranium still produce carbon emissions. As such, one could argue both sides about whether nuclear energy is good or bad for the environment.

And then there’s nuclear waste.

Radioactive nuclear waste is a pressing concern that affects the health of the planet and people. It can contaminate the air, water, and soil, as well as animals, plants, and humans.

There are two types of nuclear waste: low-level and high-level radioactive waste.

This waste is usually stored at the power plant until it can be taken to a disposal site or is no longer radioactive. Nuclear waste radioactivity declines over time through radioactive decay.

Currently, the U.S. does not have a certified, high-level radioactive disposal site.

Instead, high-level nuclear waste must be stored in large pools and containers at nuclear facilities that cool waste and reactors and provide a radioactive shield.

Nuclear waste disposal and the operation of nuclear power plants are supervised and regulated by the U.S. Nuclear Regulatory Commission (NRC).

The NRC has implemented strict regulations for decommissioning nuclear reactors and handling and disposal of nuclear waste.

There have been no radioactive leaks, radioactive-related injuries, or environmental damage involved with transporting used nuclear fuel since 1970 in the United States. 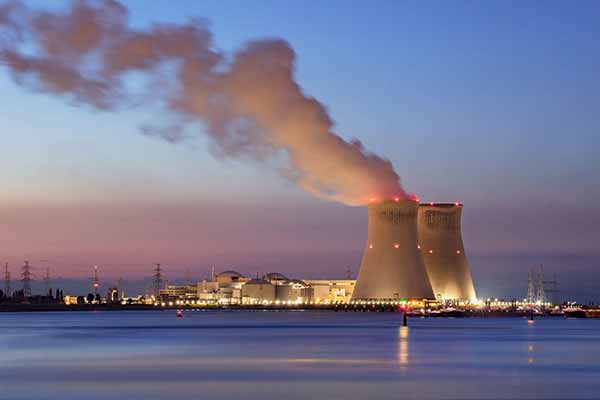 Despite over 440 commercial nuclear reactors in the world and 93 of those reactors in the United States, it’s not uncommon to question the safety of nuclear power plants.

The concern surrounding nuclear power has to do with the potential health hazards.

Nuclear waste is toxic to humans as well as the environment. When received in significant quantities, nuclear radiation can cause severe and even fatal damage to human health. Most common is the concern for radiation-caused cancer.

A particular type of radiation called ionizing radiation poses the most risk for humans. When ionizing radiation occurs, subatomic particles that are smaller than atoms interact with electromagnetic waves. Together, these particles and waves have the power to ionize or remove electrons from the atoms they strike.

Large amounts of ionizing radiation can result in radiation sickness and death.

Ionizing radiation is also feared for its cancer-causing properties. It is considered carcinogenic because it damages DNA.

Radiation can also cause acute radiation syndrome, a type of radiation sickness that can bring about skin burns, vomiting, diarrhea, and in the most severe cases, coma and death due to damaged bone marrow, internal bleeding, and infection.

This all sounds scary — and it is. But nuclear radiation created by nuclear power plants only reaches a dangerous level when nuclear chain reactions are uncontrolled.

The following examples of uncontrolled nuclear chain reactions or core meltdowns depict some of the worse nuclear power failures:

However, power plant incidents are decreasing, and governments are implementing more safety measures than ever.

The use of control rods, radioactive barriers, safety equipment, emergency shut-off procedures, education, and advances in nuclear technology have all reshaped the planning for nuclear power.

One policy enacted by the NRC requires power plants to operate without electric power in case of emergency, and safety inspectors are required to be present at power plants to oversee safety operations.

The Nuclear Industry: Could It Be a Clean Answer to the World’s Electricity Needs?

When weighing the costs and benefits of nuclear energy against the cost and benefits of human health, we must consider the impact on non-renewable, non-sustainable, greenhouse-gas emitting energy sources.

Such power sources pose public health risks. The pollution created by fossil fuels and non-renewable energy carry their costs — and they can be much more challenging to regulate and control.

Realizing the benefits that nuclear energy can provide for the planet and people, such as helping reduce climate change and creating power generation for the future, will allow the reasonable efforts and resources nuclear power needs to be given.

Until then, we await a change in the world’s reaction to nuclear energy.

Brought to you by justenergy.com