By Jeongmin Seong, Tiago DevesaAsia is the world’s consumption growth engine—miss Asia and you could miss half the global picture, a $10 trillion..

Asia is the world’s consumption growth engine—miss Asia and you could miss half the global picture, a $10 trillion consumption growth opportunity over the next decade. While sheer scale remains key to the story of the region’s consumer markets in the next 10 years and beyond, also vital is rising diversity amid significant social, demographic, and technological change. Asia’s consumer map is being redrawn.

While the COVID-19 pandemic continues to affect economies in Asia and around the world in fall 2021, this research aims to look beyond the economic effects of the pandemic, focusing on the factors that may influence long-term consumption growth in Asia to 2030 and beyond.

First, we found that as incomes rise across Asia, more consumers will reach the highest tiers of the income pyramid, and movement within the consuming class is likely to be a larger driver of consumption growth than movement into it. In 2000, only 15 percent of Asia’s population was part of the consuming class; the incomes of the remaining 3 billion people were still insufficient to support discretionary spending. However, over the next decade, a significant reversal is likely. By 2030, 3 billion people, or 70 percent of Asia’s total population, may be part of the consuming class.

Members of the consuming class are expected to attain higher income levels than ever before, changing consumption patterns and shifting the center of gravity of the income pyramid sharply upward. Building on World Data Lab’s MarketPro, we found that in the past 20 years, 80 percent of Asia’s consumption growth came from lower-income tiers of the consuming class as new entrants joined. In the next decade, 80 percent of consumption growth could come from higher-income consumers (Figure 1). 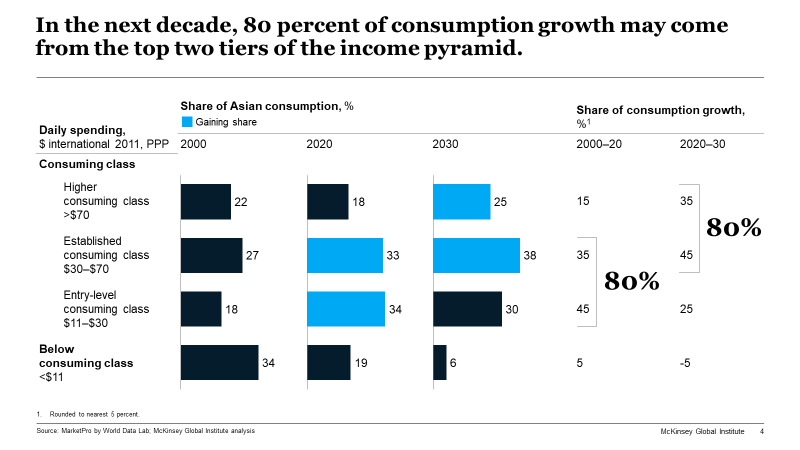 Second, cities will continue to drive consumption growth, but promising sources of growth are increasingly diverse cohorts within cities. Key groups of consumers for growth include such disparate cohorts as, say, Insta-grannies in Seoul, Gen Z gamers in Surabaya, career moms in Manila, and lifestyle-indulging digital natives in Chengdu.

Our research identifies 10 demographic and behavior shifts playing out in Asian markets. One of these shifts is aging and its impact on consumption. The number of Asian seniors (aged over 60) is expected to grow by about 40 percent from 2020 to 2030. By then, almost all seniors in Japan and South Korea are expected to be online—the Insta-granny generation. Another shift is the fact that Asian households are shrinking. Single-person households, which already account for almost one-third of households in advanced Asian economies, are fueling new products and services catering to a growing singles economy.

Less certain, but possible, is more consumption coming from working women. If further progress were to be made on women’s economic empowerment in Asia, such as increased female participation in the labor force and access to financial service and digital technologies, we calculate that $3 trillion could be added to Asia’s consumption growth by 2030.

Consumer behavior is changing, too. For instance, Asian consumers are taking a different view of ownership by increasingly exploring renting, subscriptions, and buying secondhand and digital goods along with or instead of physical goods. When they do buy physical goods, they increasingly take sustainability into account. More than half of Asian consumers in one survey said that they were changing their purchasing habits due to concerns about climate, in a clear trend toward eco-responsible consumption. Previous McKinsey Global Institute research found that Asia accounts for two-thirds of the global risk of economic disruption resulting from changes in the natural world in the period to 2050; given this, eco-responsible consumption is only likely to grow.

Third, the relationship between income and consumption is breaking down in some categories as digital platforms and business innovation accelerate. In the old Asia, owning a car, having a credit card, or even gaming depended on having sufficient income. In the new Asia, you can hail a ride on an electric vehicle, have a digital wallet on an app, and game on your phone—affordably.

So the income-driven S-curves (Figure 2) that are so familiar to consumer-facing companies are changing. These curves may flatten as more people, even on lower incomes, can afford certain goods and services. We call these new curves “access curves” and see them already emerging in categories such as mobility, banking, and gaming.

In private vehicle-based mobility, for instance, the penetration of car ownership follows a well-established S-curve, experiencing a sharp increase when countries reach sufficiently high incomes. However, in the case of new mobility solutions such as ride-hailing, penetration is much less dependent on income.

Even in categories where a strong relationship with income continues, S-curves may shift due to cost innovation, with tipping points occurring at an earlier stage in economies’ development. Examples include smartphones and LED lights.

As a result of the shifts identified, a significant proportion of demand is migrating to dynamic consumption curves (i.e., market-specific curves), but the size of this shift is likely to differ by sector. In automotive, the shift could be as high as 65 percent of value. In financial services, 15 to 25 percent could shift. 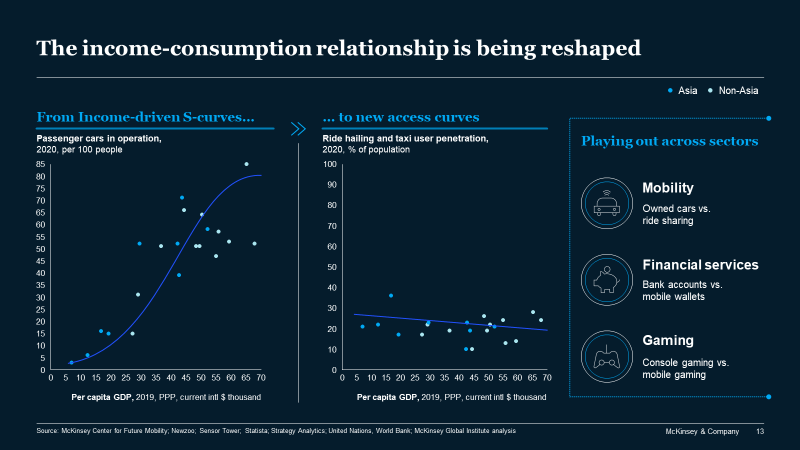 There is still a lot of charge left in Asia’s consumption battery, and little doubt that its consumption landscape is being redrawn. Scale, certainly, remains a key factor in the contours of Asia’s consumer growth map, but increasingly it is diversification and segmentation that is redrawing the details.