By Rushaine GoulbourneThe southeastern coast of the United States is threatened yearly by hurricanes, some receiving more media coverage and..

The southeastern coast of the United States is threatened yearly by hurricanes, some receiving more media coverage and resources than others. Coastal states such as Florida experience more hurricane impacts than other states and thus the greatest labor market disruptions from these disasters. My recent study analyzes the effect hurricanes have on employment and wage growth in Florida counties. The study also demonstrates the importance of using hurricane strength measures. Results show that the job growth effect of hurricanes is felt primarily through falling employment growth in the quarter following a hurricane. Strong hurricanes damage both employers and employees, but impose greater consequences on employees through labor displacement that may either be temporary or permanent. Temporary relocation to areas not affected by hurricanes restricts workers from jobs and income needed to address post-hurricane concerns such as secure housing. Where relocation is permanent, workers are faced with the challenge of seeking new jobs. The process of resettlement can lead to long term unemployment, further episodes of job loss and lower wages.

All hurricanes, regardless of strength, will reduce employment growth in the affected counties. The reduction in employment growth can be attributed to the effects of hurricanes on both workers and employers. For workers, there is the inability to return to work while dealing with the aftermath of a hurricane which may have caused injury, death, or relocation to safe housing due to property damage. In some cases, post-hurricane housing circumstances cause workers to reside too far from their employers, leading them to seek new employment elsewhere. These possibilities reduce the pool of workers available for employers to re-open. For some, there is also the short-term benefit of higher wage growth in affected areas due to competition for available labor. The length of time for this process depends upon the degree of damage from the hurricane. Stronger hurricanes (categories 4-5) caused the greatest impact, affecting both employment and wage growth while weaker hurricanes (category 1-3) were shown to primarily impact employment growth.

The reduction in job growth is driven by physical damage to businesses and the services necessary for operation (e.g. power, water, transportation networks). Storms also temporarily suppress demand for some goods and services, such as luxury goods and tourism. Tourism is particularly important for coastal counties. Making insurance claims and applying for financial assistance is difficult particularly for small businesses, characterized by lower revenue and employment numbers. These delays in operation cause many small businesses to fail.

Rather than relying on the assumption that the labor markets across the counties in Florida are similar enough to compare affected and unaffected counties within the state, data from counties in other coastal states were used for comparison units. These counties showed similar labor market trends to affected Florida counties. Counties from six other southeastern states (Alabama, Georgia, Louisiana, Mississippi, North Carolina, and South Carolina) were used to conduct this portion of the study. Figure 1 (below) presents the probability of hurricane experience by the counties in all seven states. These probabilities were used to guide the selection of counties that were most similar to affected Florida counties in terms of historical hurricane experience. The findings supported the overall conclusion of the study, stating that employment growth falls because of hurricanes. Across both severe and less severe hurricanes, wage growth was shown to be lower for the affected Florida counties as well. This revelation points to the fact that hurricanes cause reduced job growth and for those jobs that are created, in comparison to similar counties in other southeastern states, the growth in compensation is less. 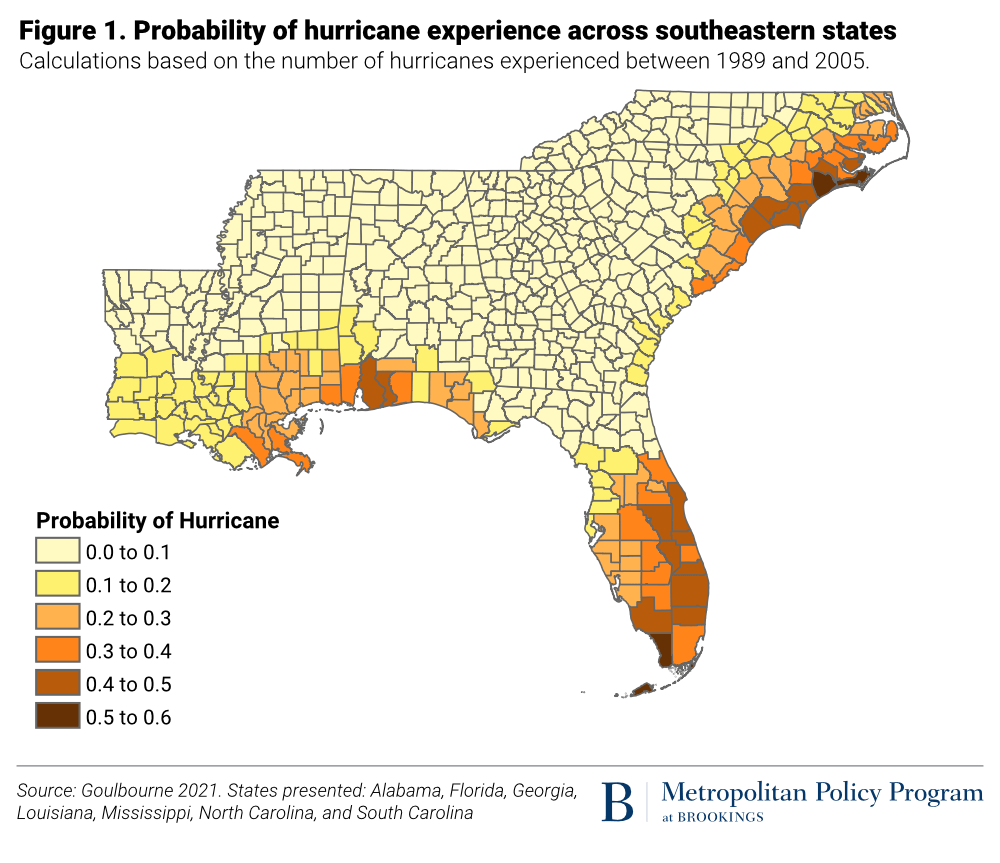 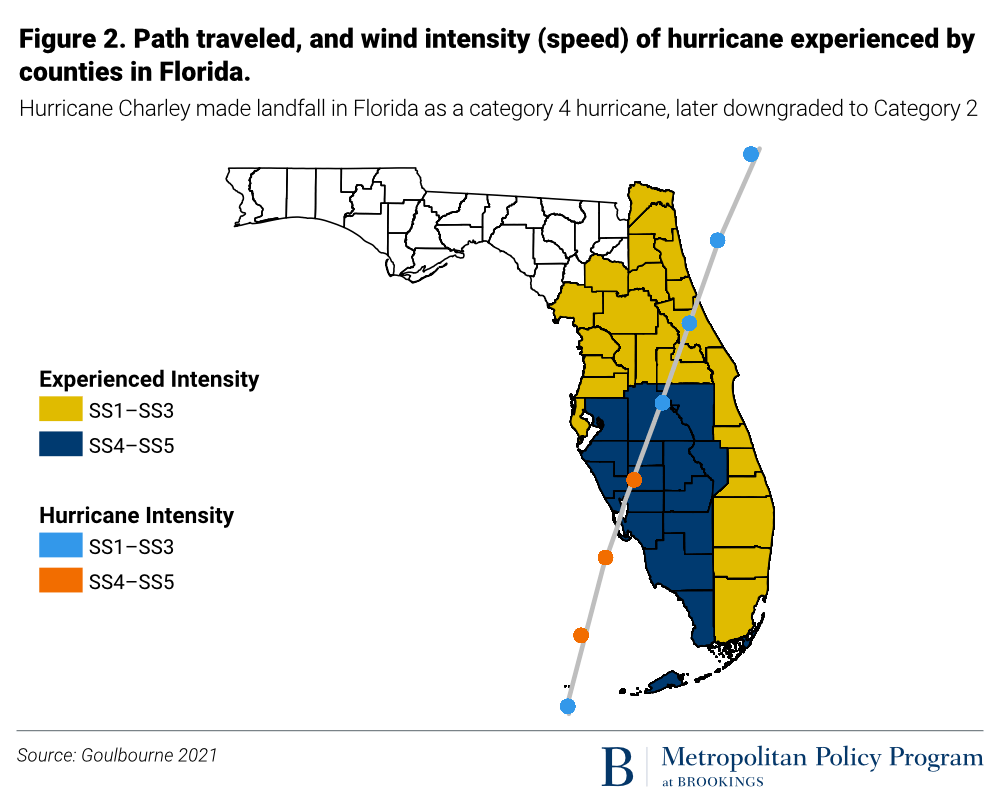 Figure 3 (below) highlights the usefulness of measuring hurricane intensity. Using the Federal Emergency Management Agency (FEMA) disaster area declarations for Hurricane Andrew, panel (A) shows the counties that were designated as disaster areas. Panel (B) presents a similar diagram showing those counties that experienced the most severe wind speeds, per the measurement technique used in the study. Included in the figure is a pink circle plotted on the path of the hurricane in panel (B) that has a radius of 30 kilometers. For the measurement method presented in previous economics literature, only counties that fell within the pink circle would be classified as affected. We can then see that this method would classify counties that were harmed as unaffected, leading to a measurement error. 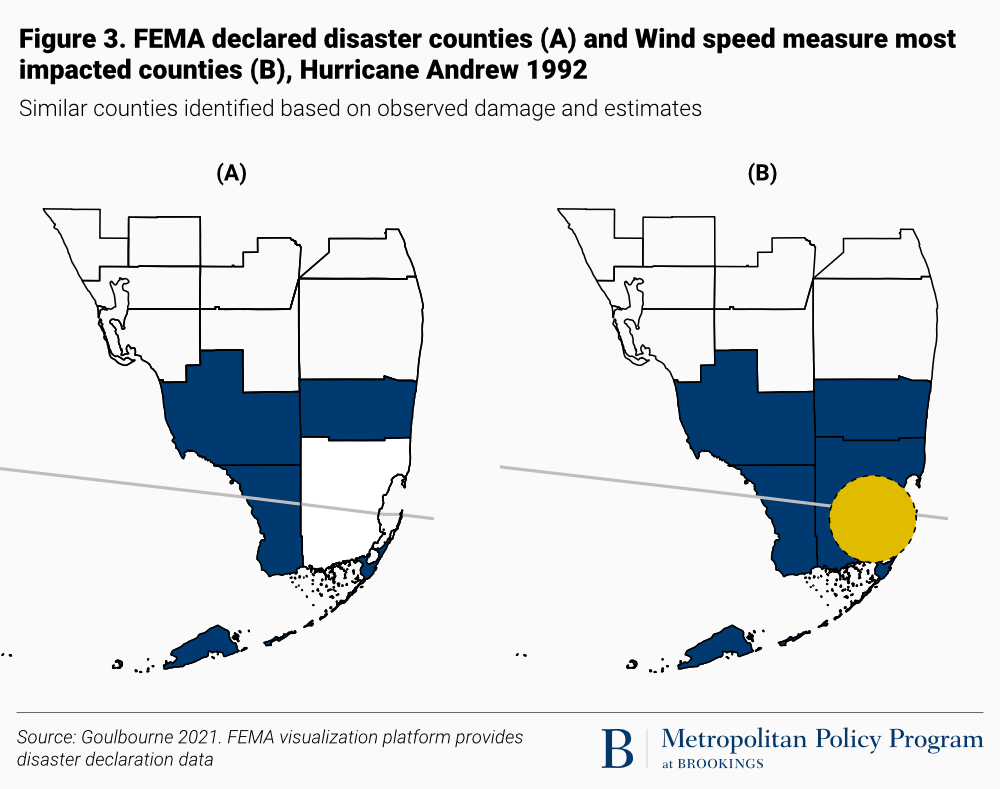 Policies directed at ensuring the viability of small businesses following hurricanes will be very helpful for affected employers and their employees. Many small businesses that operate in hurricane-prone areas conduct their operation from weekly cashflow. This makes it easier for these employers to shut down given lengthy delays in lifeline services and lack of business operation. Making it easier for small businesses to acquire funding for recovery following hurricanes is an effective way of getting them back to operation. Employers have different needs for lifeline services such as electricity, telephone, water/sewer, and natural gas. The effects of hurricanes on these services are difficult to forecast. County and state leaders in hurricane-prone counties should take adequate stock of critical infrastructure to ensure their integrity in the event of a hurricane.

Population displacement is also a problem that follows from hurricanes. In order to effectively return to work, housing concerns of workers must be addressed. Low-income households, particularly low-income renters, are especially vulnerable. Evidence shows that low-income renters are more likely to be denied financial assistance from FEMA, compared to homeowners. Addressing the immediate impacts of hurricanes on housing, especially in economically vulnerable communities, will allow workers to return to work sooner. This will also relieve the burden of a job search and potential hardship that could be encountered in a separate location where travel is not viable to the old source of employment.

Government officials need greater awareness of the effect hurricanes have on employers and employees, and researchers need to use carefully designed measures to support the decisions officials make.