What can current inflation tell us about our future?

By Wendy EdelbergWhat signal should we be taking from current inflation for future inflation? The answer: some signal, but not a lot. To be sure,..

What signal should we be taking from current inflation for future inflation? The answer: some signal, but not a lot. To be sure, inflation is running high (figure 1); and, after excluding the typically volatile categories of food and energy prices, is running higher than it has been in decades. But because the factors that are leading to inflation are pandemic-related and therefore temporary, the current trend does not forecast the future. 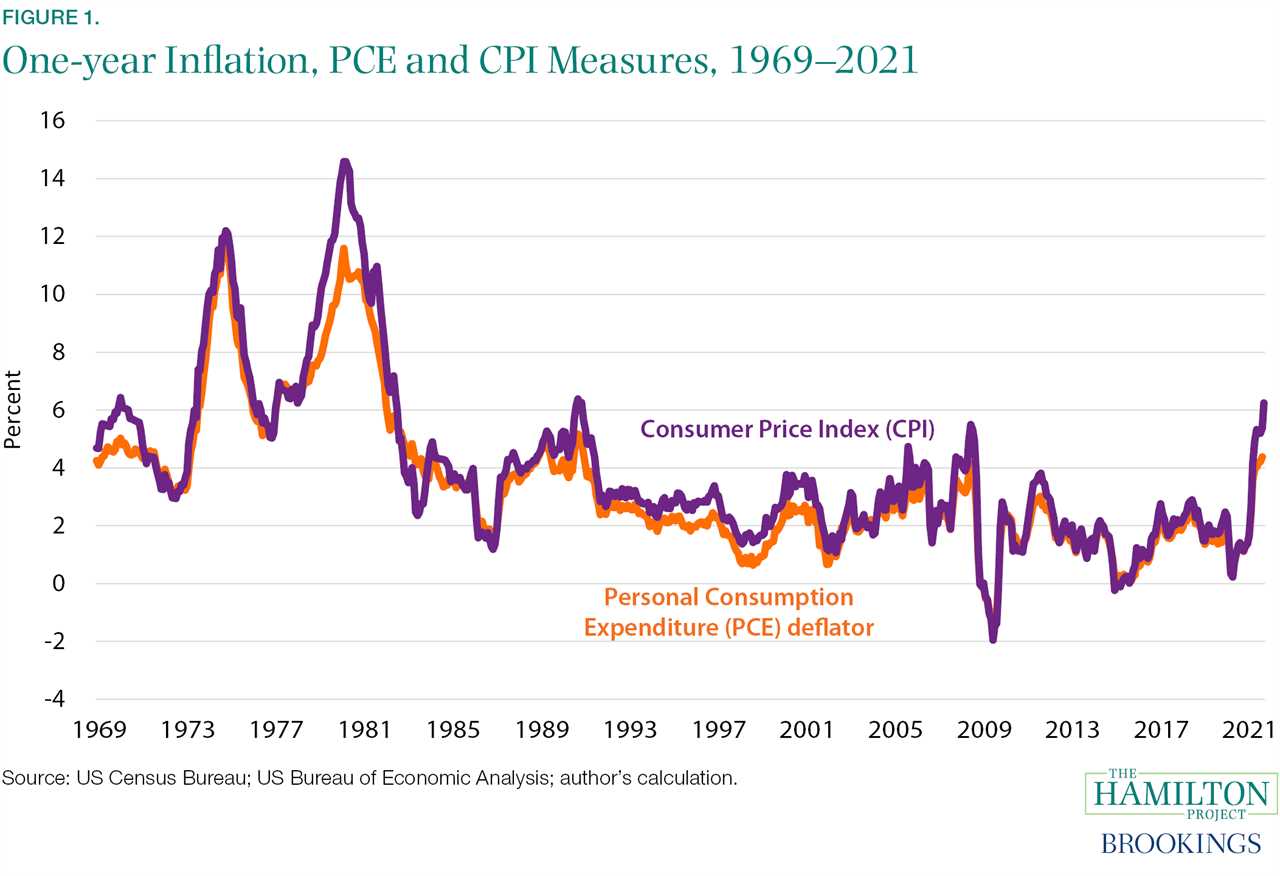 To examine whether this short-term run up in inflation points to higher inflation in the years ahead, I look at the factors that appear to be contributing. I find that the strength and composition of consumer demand for goods since the pandemic began as well as supply constraints caused by the pandemic are the sources of the current spike. The clearly temporary nature of those factors suggests we should not extrapolate recent inflation pressure into the future.

Inflation as of October 2021

Figure 1 (above) shows inflation from 1969 to 2021, both by the consumer price index (CPI) and by the personal consumption expenditure (PCE) deflator. Some observers have tried to draw parallels between the current episode in inflation and the 1970s; this is incorrect. While inflation has increased relative to recent years, inflation is significantly below the levels seen in the 1970s.

As measured by the CPI, the annual rate of inflation from October 2020 to October 2021 was 6.2 percent. As measured by the PCE deflator, the annual rate of inflation from September 2020 to September 2021 (the most recent available data) was 4.4 percent. Some of those price increases reflect a bounce back from the unusually low level of prices in the first part of the pandemic. For example, if the CPI had grown at a rate close to the Federal Reserve’s target from the first month of the pandemic through October 2020, the CPI annual inflation rate over the last year would have been 5.1 percent. That rate is still quite high, but a percentage point lower than the actual annual rate.

Which goods and services have driven the recent run-up in inflation? Figure 2 shows that the answer is core commodities, or goods. As figure 2a shows, core goods inflation has been strikingly high in recent months. In contrast, inflation in core services (2b) has been far more muted and has generally recovered to pre-pandemic rates. Figures 2c and 2d show that inflation in energy and in food, which are excluded from core inflation, are both elevated. Energy inflation is quite volatile; domestic energy producers faced very low prices early in the pandemic, and those producers may be waiting to see if price increases are durable before increasing supply. Food inflation is worrying and appears to be a global trend related to the pandemic among other factors. The same trends are evident looking at PCE inflation (not shown). 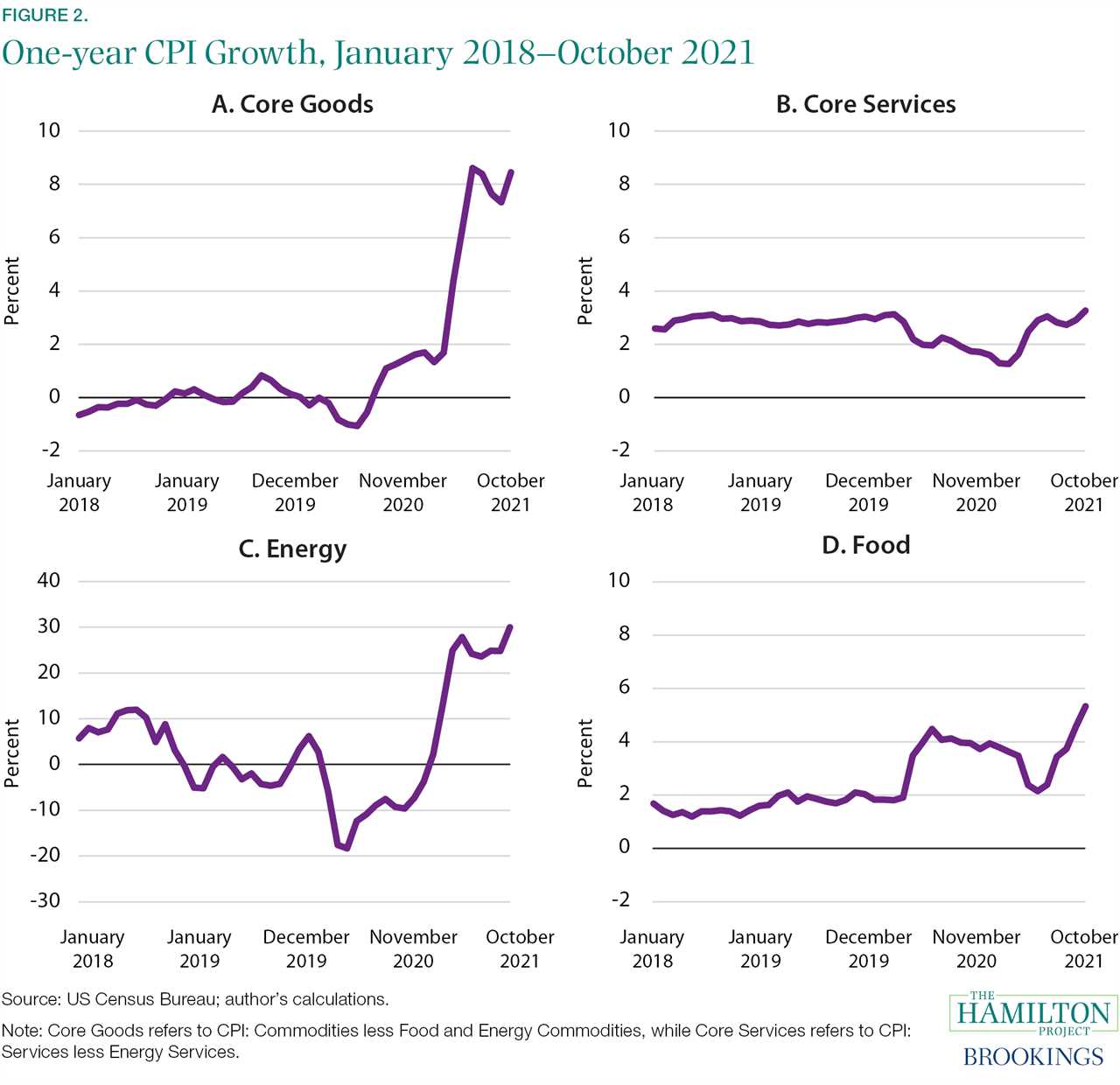 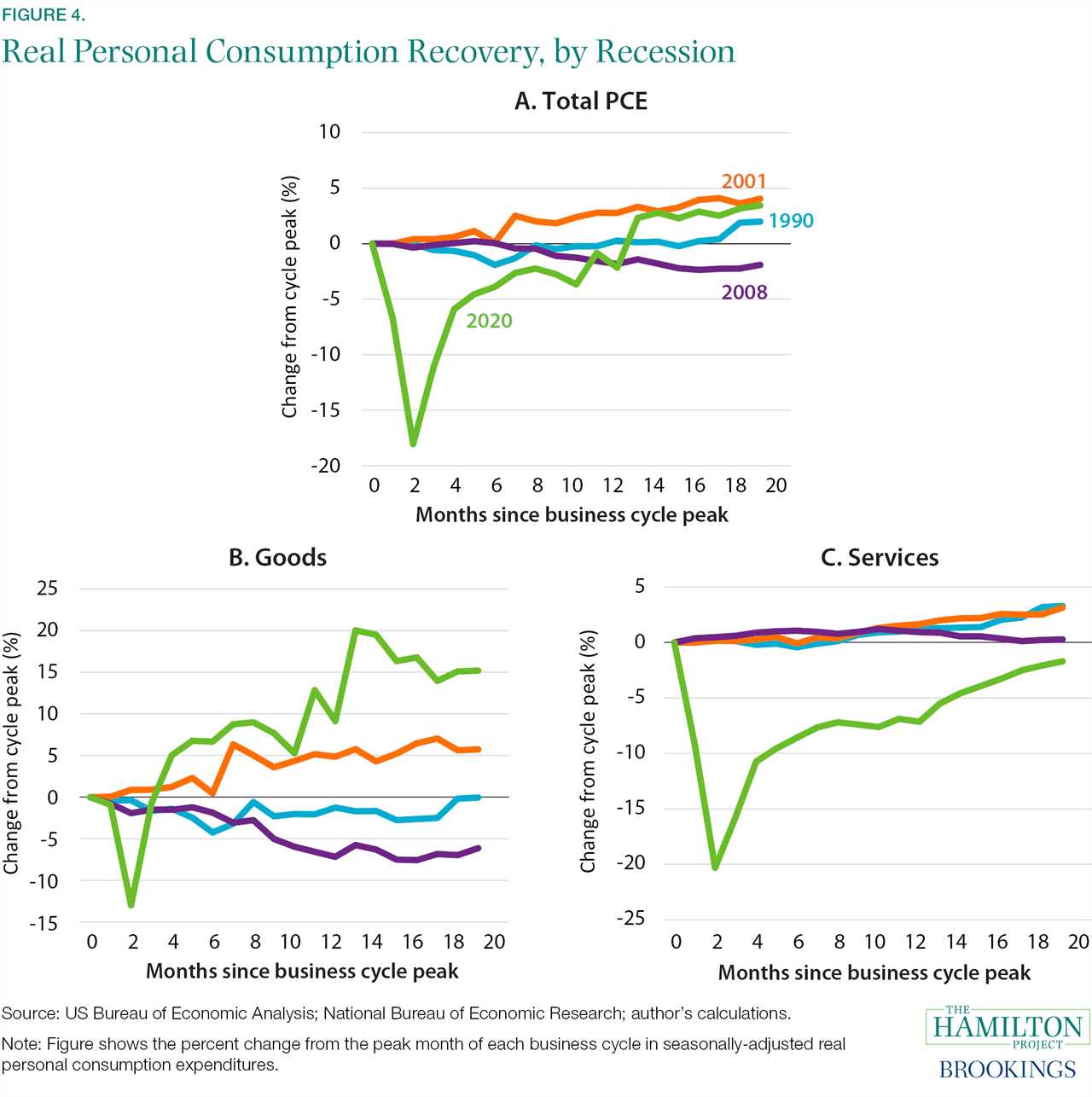 Are the trends described above a signal that we should expect continued extraordinary inflation for core goods—everything from automobiles to exercise mats—in the coming years? Three factors suggest no.

In contrast to spending on consumer goods, spending on services remains below its pre-pandemic peak. This pattern is a significant departure from previous business cycles where services were relatively unaffected.

Inflation Risks on the Horizon

Although the recent surge in consumer goods inflation does not suggest persistent inflation in this sector going forward, two other issues present risk to the inflation outlook: labor supply and demand in the services sector as well as the recent increases in housing prices.

As consumer spending rebalances towards services, demand for labor in the services sector will rise beyond already-elevated levels. For example, in September, job openings in leisure and hospitality were a remarkable 530,000 higher than trend but employment was 1.5 million below its pre-pandemic level. If consumer demand for leisure and hospitality services return to (or temporarily exceeds) pre-pandemic levels, demand for labor will likely increase significantly.

Softness in labor force participation rates and a frustratingly slow pace of matching job seekers with jobs has raised concerns about weakness in the supply of labor. To be sure, the pace of job matching is probably slowed by the sheer number of job openings and opportunities across multiple industries that candidates have to consider. In addition, because of pandemic-related issues, some people are constrained from working or worried about the health risks of working. My expectation is that those issues will resolve.

However, continued weakness in labor supply may suggest that the experience of the pandemic and the changing nature of work since March 2020 could persistently dampen how much labor people are willing to supply. If labor supply continues to be restrained, this will affect the ability of the U.S. economy to produce goods and services. That would increase inflationary pressures for a given level of aggregate demand, which is a problem. But, in that circumstance the more significant problem to address would be that our standard of living would be lower.

The other factor that is creating some inflationary risks on the horizon is house price growth and how that is going to spill over into the rental market. Historically, there is a strong relationship between house price growth and inflation in the rental market (figure 5). After rents grew at roughly a 3¾ percent annual pace before the pandemic, this inflation rate was at a remarkably low level of less than 2 percent in the first half of this year. Rent inflation is now rising to more typical levels; rents grew 2¾ percent between October 2020 and October 2021 and that rate looks poised to increase. While deserving of notice, worrying inflation in this sector would be more of the plain vanilla-type that less accommodative monetary policy would be well-equipped to dampen. 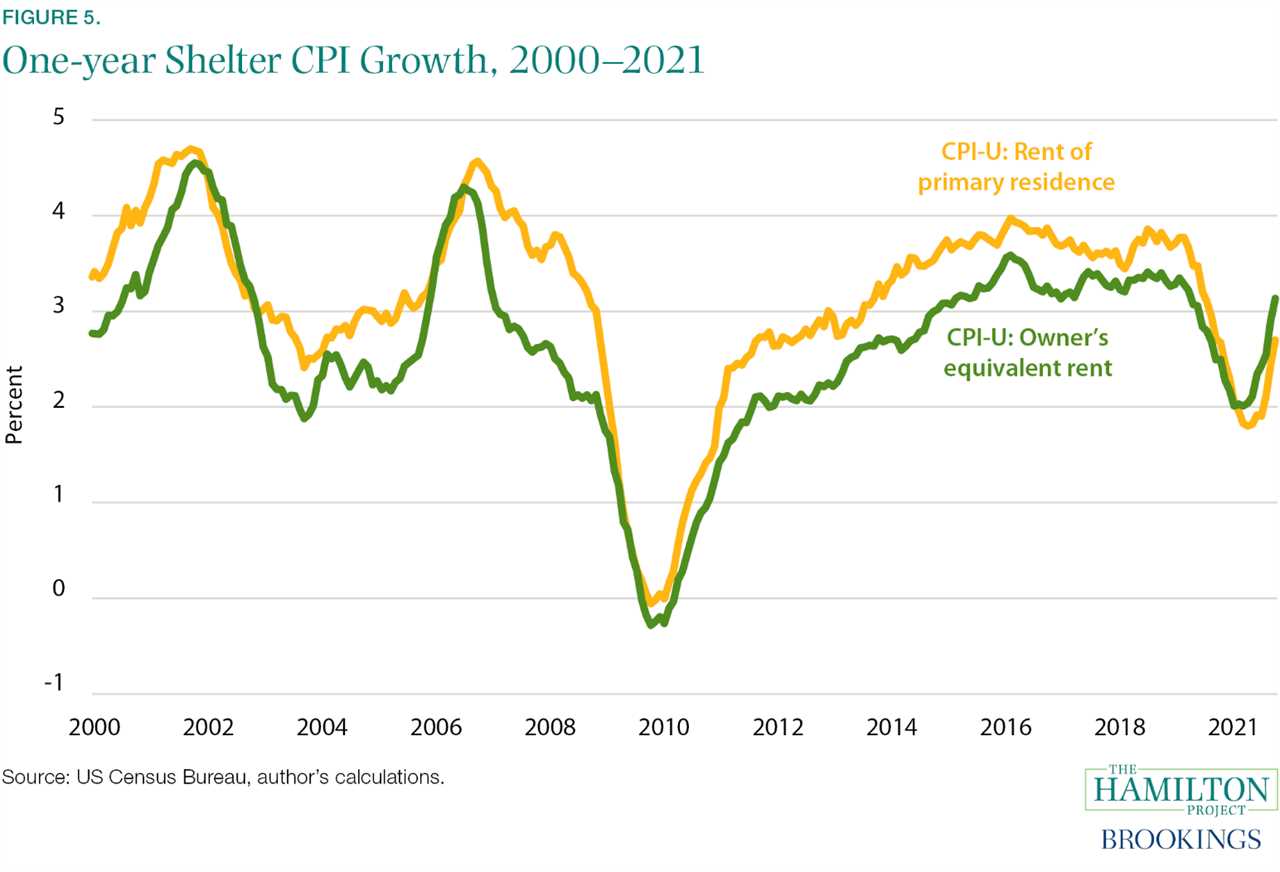 Policymakers can encourage labor supply by continuing to get the pandemic under control through vaccinations and sensible health policies. Moreover, policymakers can also remove barriers that make work costly, such as lack of access to affordable, high-quality childcare. Policymakers can facilitate the matching of job seekers with jobs through job fairs and better access to labor market information. Finally, immigrants are a critical source of workers in the U.S., and rates of immigration are significantly down relative to pre-pandemic projections. A return to more typical levels of, for example, green card issuance would help to expand labor supply in the U.S. to meet the growing demand for labor. In short, the policies that will rein in inflation in the future are the same policies that support a sustained and equitable labor market recovery.

The Brookings Institution is financed through the support of a diverse array of foundations, corporations, governments, individuals, as well as an endowment.  A list of donors can be found in our annual reports published online here. The findings, interpretations, and conclusions in this report are solely those of its author(s) and are not influenced by any donation.