What is the next step for poverty reduction in China?

Earlier this year China’s government announced that it had eradicated absolute poverty, measured against a standard equivalent to $2.30 per person per day applied to rural areas. The latest Household Survey on Income, Expenditure and Living Conditions data by China’s National Bureau of Statistics, available for the year 2018, suggest that against an international poverty line of $1.90 per day, the poverty rate had declined to below 0.5 percent. This suggests China has reduced the number of poor people by close to 800 million since 1980. Whatever the specific numbers, China’s poverty reduction is a remarkable achievement. Yet, it cannot be the end of China’s efforts. As the country looks to the 2020s, what lessons can the authorities learn from the past 40 years and what should be the focus of policy?

China’s poverty reduction success since 1980 is primarily a story of sustained economic growth. The first decade of reform saw rapid income gains in agriculture, as China removed some of the biggest distortions of the Mao era. In the second decade, industry took the leading role, both in urban and rural areas, as reforms widened and deepened. During the third decade, the dynamism of China’s export-oriented coastal areas spread further inland, as migration to the urban centers accelerated, infrastructure investments (such as with the “Western Development Strategy”) multiplied, and a growing proportion of China’s territory became economically integrated into global value chains. This decade also saw an expansion of China’s social policies, including place-based interventions in the most backward counties and the creation of a basic safety net for China’s rural population. During the final decade, these social policies were widened, culminating in the targeted poverty eradication campaign of the past five years. Only during this final period did transfers become a more important driver of poverty reduction than labor incomes (see Figure 1). 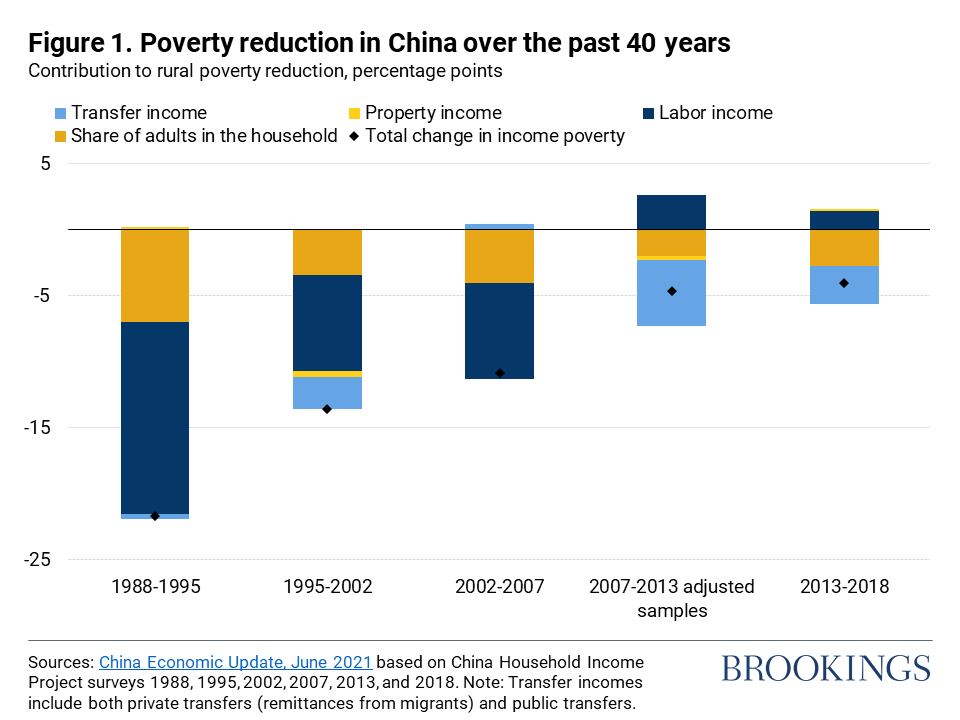 China’s conditions today create mixed prospects for growth and income gains among the poor. China’s technological capabilities and the competitiveness of its leading companies are on par with high-income countries, and its best performing schools and students rank top in the world. But these capabilities are not broadly shared. The dispersion of productivity levels across Chinese companies is high. Average educational attainment of the labor force is low by comparison with high-income countries and access to good education remains unequal (Figure 2). China needs to pay more attention to these inequalities. 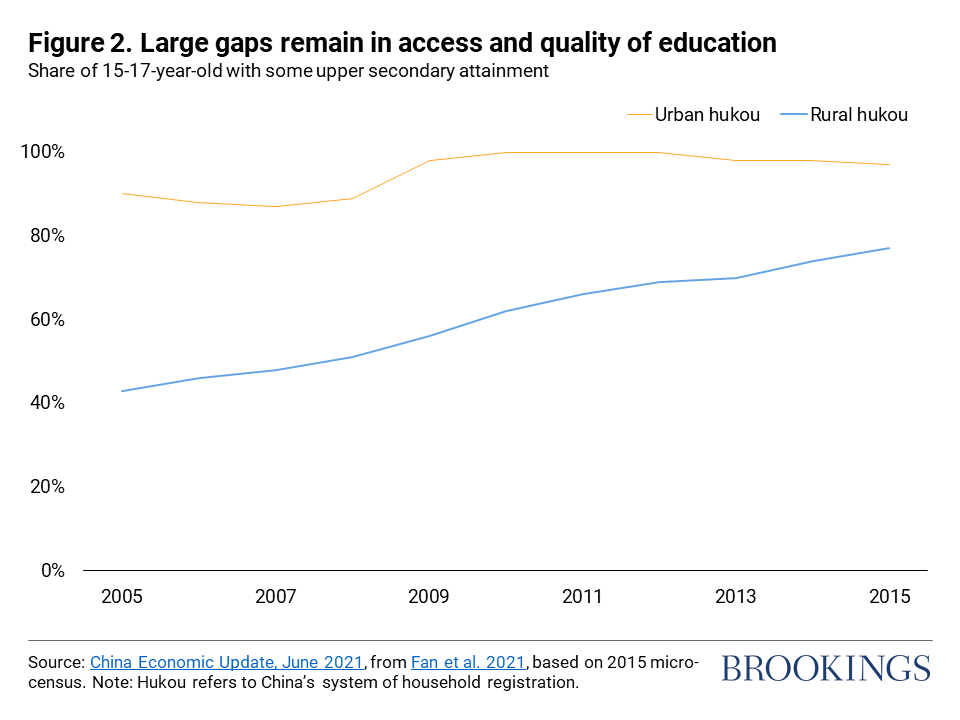 Market-oriented reforms could be an important catalyst for the greater diffusion of technological capabilities and for improved access to quality services. Among companies, leveling the playing field in access to finance and land could help promising small and medium businesses grow and create the jobs of the future. Lifting the remaining hukou related restrictions to labor mobility could help the current generation of school children access better education and health services in urban areas, improving social mobility and economic opportunities. This would over time help alleviate the risk of shortages of skilled labor, including in the urban service sector, which is likely to drive future productivity growth.

China’s administrative capacity is an asset in its transition to high income, but the government’s role in supporting the poor and vulnerable will have to shift. China’s poverty line is below the level in most upper-middle-income countries, and less than half the $5.50 per day typical of upper-middle-income countries. Adopting a higher line would change the profile of the poor: At $5.50, around one-third of the roughly 180 million poor would be in urban areas, for example, and many of them would be informal, migrant workers outside of agriculture. Among these groups, poverty is more likely to be transient, associated with spells of unemployment and out of pocket health and education expenses. Social policies would need to recognize these differences, just as targeted poverty reduction was based on an evaluation of household needs in rural areas. 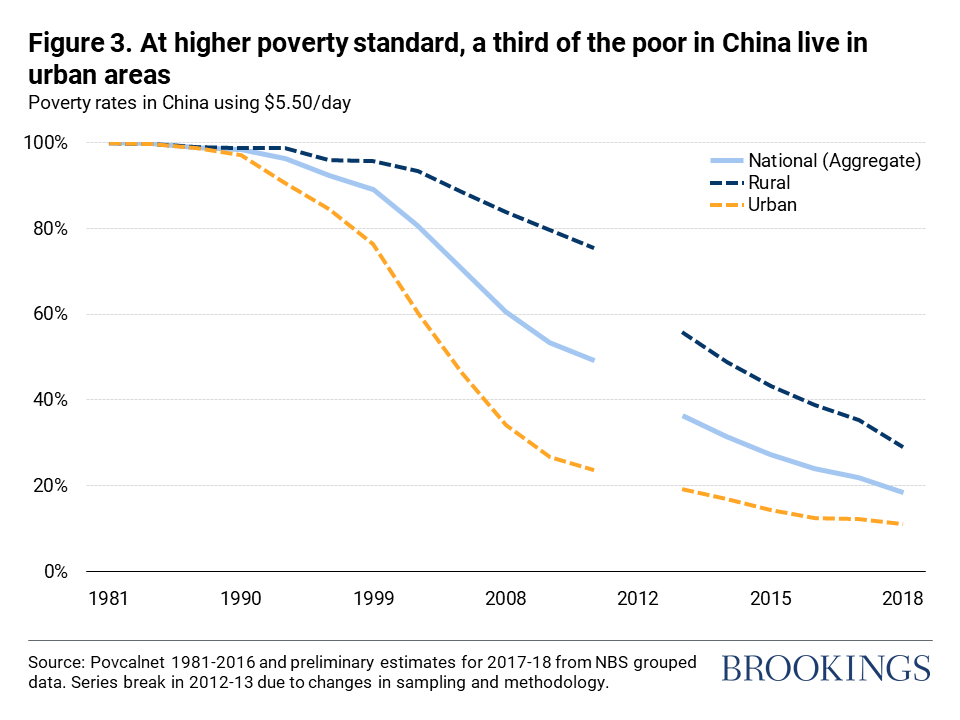 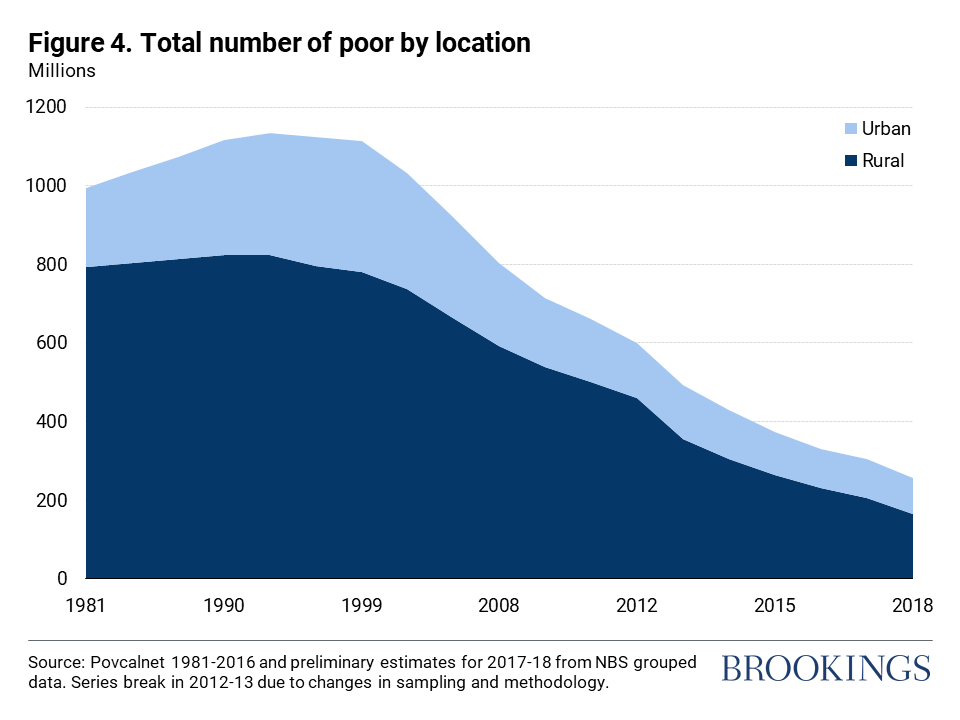 Following the eradication of absolute poverty, China has set the year 2035 as the target date to achieve common prosperity. This is understood as providing the opportunity for a decent standard of living to all Chinese citizens. Ensuring equal access to education, health care, and other services, leveraging market signals and competition to encourage innovation and the diffusion of technologies, and repeatedly adjusting government policies to ensure social transfers target key vulnerabilities and help China’s citizens manage the risk of a rapid socioeconomic transformation—these are the lesson of the past 40 years. They will continue to serve China well on the road ahead.